Albert Einstein turned to imaginary experiments to test his theories. He was the first to talk about the expansion of the universe and of its infinite past. 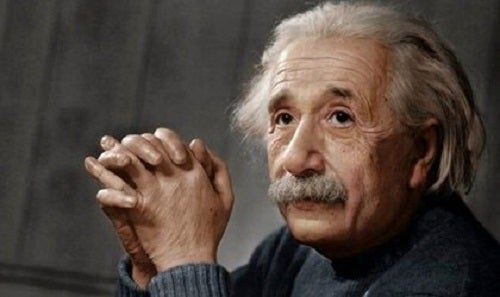 Albert Einstein was a scientist and an inspiring visionary. He found beauty in darkness, revolutionized physics, and helped us understand the universe in new ways. He often said that he lacked talent and that he was simply a passionately curious man. Curiosity and creativity were, without a doubt, his core principles.

Albert Einstein is the most charismatic figure of the twentieth century. We all know his famous mass-energy equivalence equation, E = mc2. But we also must give him credit for laying the foundation for cosmology, statistical physics, and quantum physics.

Additionally, many people refer to him as the “father of the atomic bomb”, as his work aided in the development of the Manhattan Project. Nevertheless, Einstein defined himself as a pacifist. He often reiterated his regret for having convinced President Roosevelt to finance his research. Nonetheless, his advances and discoveries changed history in many ways.

Einstein’s work was key to Stephen Hawking. His legacy is so vast and inspiring that many of his predictions are still being confirmed today, as is the case of gravitational waves.

A boy that astonished the world

Einstein was born in Ulm, Germany into a Jewish family. His father, Hermann Einstein, was a businessman and his mother, Pauline Koch, was a pianist. Music was a big part of Einstein’s life from a young age.

It should be noted that Einstein began speaking at a late age and was also slow to begin reading and writing. In addition, he was secretive, quiet, and very introverted. All of this made his parents and teachers believe that he had some sort of learning disability.

However, he described that period of his life as a sort of retreat during which he began to wonder about things that no one else his age thought about. At the age of six, he started questioning things about space and time. Due to his musical education, his patient sister, and his uncle Jakob (who was passionate about algebra and research), Einstein began opening himself up to the world.

At the age of fifteen, he began studying infinitesimal calculus on his own. When he turned seventeen, he began studying physics and mathematics at the Swiss Federal Institute of Technology in Zurich. Shortly thereafter, he met the love of his life, Mileva Marić, a brilliant Serbian classmate who he eventually had two children with.

In 1905, he published several papers that were fundamental to his legacy as a scientist. In the first paper, he examined Brownian motion (the random movement of particles found in a fluid). The others referenced important occurrences, such as the photoelectric effect, special relativity, and mass-energy equivalence.

The photoelectric effect earned him the Nobel Prize in Physics in 1921, nearly two decades later. Einstein worked as a professor at universities in Bern, Prague, and Berlin. However, when Hitler rose to power in 1933, Einstein fled to the United States, where he spent the last twenty-five years of his life.

He passed away on April 16, 1955, after suffering a hemorrhage caused by the rupture of an abdominal aortic aneurysm. He was seventy-six years old.

“I want to go when I want. It is tasteless to prolong life artificially. I have done my share; it is time to go. I will do it elegantly.”

Albert Einstein was an innovative genius

He was an innovative genius and often used what he called “thought experiments”. He spent a lot of his time imagining different aspects of his theories. For example, he’d imagine a man traveling through space in an elevator. He also imagined blind beetles crawling on curved surfaces.

His experiments allowed him to explain different elements about the force of gravity or the way in which photons run along a curved path and not in a straight line as many previously believed.

Nowadays, many people continue to demonstrate many of his theories.

Many people believe that Einstein received his Nobel Prize for his theory of relativity. However, it was for the photoelectric effect. In fact, thanks to this development, we have many essential technologies within our reach such as the television, solar panels, microchips, motion sensors, photocopiers, digital cameras, and automatic lamps.

In 1915, Albert Einstein presented his theory of general relativity at the Royal Prussian Academy of Sciences. He tried to debunk Newton’s law of gravity with this theory.

Einstein’s legacy is extensive and began with his first publications in 1905. His unified field theory took up much of his later years. This is because he wanted to unify his studies of gravitation with electromagnetism. These are his other lesser-known contributions.

Even today, many of his questions still lack answers. Albert Einstein was a pioneer in unveiling the secrets of the universe and the mysteries of the atom.

His creativity and curiosity knew no limits. His critical spirit was capable of challenging what others took for granted. In the end, that’s what an authentic scientist and a true knowledge-seeker should do: challenge the established.

The Incredible Story of Einstein’s Brain
The incredible story of Einstein's brain has many twists and turns. The findings from studies of the brain of this genius are fascinating. Read more »
Link copied!
Interesting Articles
Culture
Do We Need Intense Experiences in order to Value Life?

An accident, an illness... saying goodbye to someone you love, or realizing that someone isn't coming back. In moments like…

Culture
Maria: The Story of a Transsexual Child

Sexuality has many dimensions. One of those dimensions is transsexuality. A transsexual person has a biological identity but doesn't identify with…