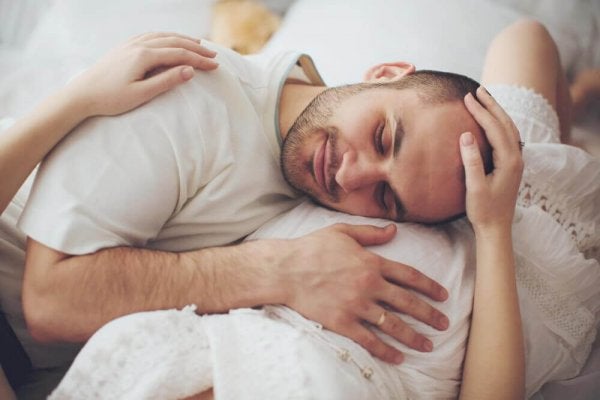 Although most psychology articles focus on well-known mental disorders such as depression and anxiety, there are all sorts of psychological problems that can be equally or more disabling. One of the most curious ones is couvade syndrome, also known as sympathetic pregnancy.

This syndrome manifests in soon-to-be-first-time fathers and leads to them having many typical pregnancy symptoms. In this article, we’ll be touching on the most common symptoms of this syndrome, as well as its possible causes.

Couvade syndrome: What is it?

Couvade syndrome is a condition that makes some men have pregnancy-like symptoms when their female partner is expecting a baby. Although no one knows the exact cause of this syndrome, it’s believed that it may be related to too much empathy toward the woman’s pregnancy and the organic changes that said empathy can produce.

This condition significantly alters the hormones of the men who suffer from it. In fact, recent studies have discovered that the testosterone levels of those affected decrease in most cases, while prolactin (one of the main pregnancy-related hormone) levels increase.

Experts differentiate this condition from other mental disorders such as psychological pregnancy. The latter occurs in women. However, both are classified as psychosomatic disorders, that is, disorders in which the mind produces real bodily changes.

The symptoms of this condition usually manifest around the first trimester of pregnancy and usually disappear once the baby is born. Therefore, and because it poses no real health risk, couvade syndrome isn’t considered a serious problem.

However, most of the symptoms that this condition causes can be quite bothersome. Some of the most common ones are:

Some experts believe that the hormonal changes a pregnant woman experiences could, in turn, affect the man’s hormones, which would explain why there’s a decrease in testosterone and an increase in prolactin.

Some studies suggest that men who tend to put themselves in their partner’s shoes excessively may be more likely to show symptoms of this syndrome. This means that the man’s willingness to share the burden or his desire to participate actively in the pregnancy could cause this condition.

A pregnancy represents an important change in a couple’s life. Thus, it can become a stressful situation which may trigger anxiety in the father. Too much anxiety is related to a testosterone decrease. Researchers suggest this may explain some of the symptoms of this condition.

Finally, some psychologists suggest that men who suffer from this syndrome may feel jealous of either the mother (because they feel a new life forming inside of them) or of the baby (since they’re no longer going to be the most important person in their partner’s life). This jealousy can cause the disorder since it’s kind of an unconscious way for them to draw attention.

Although it can be quite annoying, couvade syndrome isn’t dangerous at all. If you’re suffering from it, remember that contacting a mental health professional can put you on the right track to overcoming it.

Prenatal Psychology: The Importance of Building a Healthy Bond with the Baby
Understanding prenatal psychology is crucial. This is an area of psychology that looks at the psychological changes that women go through from conception to postpartum.  Read more »
Link copied!
Interesting Articles
Personality Psychology
T. Adorno's Authoritarian Personality Theory

Psychology
Emotional Spaces - My Favorite Place is With You

One of the basic rules of mental health is to inhabit and be yourself in positive emotional spaces. These are…