How to Cope with Despair and Depression

Deep despair is the reason behind many cases of depression. How can you escape from the seemingly endless darkness? Read on to discover the answer! 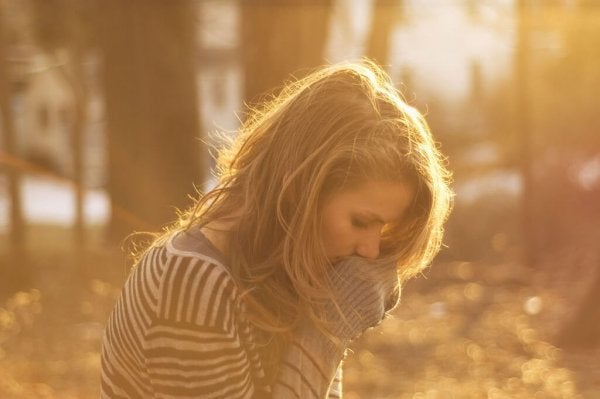 There are times when we feel desperate because we can’t make sense of what’s going on around us. We feel angry at ourselves and take it out on those closest to us. The truth is that behind these distressing psychological realities, we see the other side of depression. In today’s article, we talk about how to cope with despair.

Despair is the echo that emerges from the void. It’s the rage at losing hope, it’s an endless sadness people who believe they’ve lost everything feel, those who can no longer perceive light on the horizon or meaning in their existence. Few psychological states can become as dangerous as that point when a person no longer knows which path to take or what they can truly believe in.

We know that despair is a common human experience. Philosophers such as Søren Kierkegaard have talked about it a lot, defining it as a lack of spirit, meaning, and challenge. Jean-Paul Sartre, on the other hand, said that it’s the frustrating inability to move forward, as well as cowardly negativism that society often instills in us.

From a psychological point of view, no one has delved deeper into human despair as much as Viktor Frankl. He was the father of logotherapy and a survivor of several Nazi concentration camps. He defined this concept through two very basic ideas: suffering and loss of meaning.

These experiences are undoubtedly some of the bleakest for a human being, but it’s still possible to cope with despair and come out stronger on the other side. We all have the capacity to face life with renewed vigor and resources.

“But what we call our despair is often only the painful eagerness of unfed hope.”

Deep despair can cause depression

If each person on this planet lacked a purpose and meaning, this would to complete despair. Although we often define this situation as a mixture of sadness and lack of hope, we should realize that it’s much deeper than that.

It’s a feeling of emptiness and a state of mind where someone doesn’t stop asking questions they don’t have the answers so. Here are some examples of said questions:

These types of questions only feed the cycle of despair, taking the person further and further into psychological darkness.

Studies such as the one Dr. Martin Bürgy from the University of Stuttgart in Germany carried out indicate that despair is a subject that has been neglected until quite recently in the world of psychology. For whatever reason, we always seemed to leave it to the world of philosophy, which seeks to answers questions regarding the more existential problems in life.

It’s very common for despair to manifest as a result of anxiety. However, if this situation is maintained over time, the person will almost inevitably drift towards a depressive disorder.

Cope with despair by facing your problems

Despair, if left untreated, can end up creating all sorts of extreme ideas in a person’s mind. Thoughts of suicide can manifest in our minds as a result of that total loss of meaning and hope. In this dangerous condition, it’s crucial to seek psychological help.

Despair is something that’s almost always present in severe cases of depression and even in bipolar disorder. These are very delicate situations that often require pharmacological treatment along with therapy. However, as we said at the beginning, these situations can be overcome with specialized help and commitment.

Cope with despair by channeling your anger

Anger is powerful, vindicating, and transformative if we channel it well. Despair manifests from the anger of people who find no meaning in anything. They’re angry with the world and with themselves. This, as surprising as it may sound, is actually a good thing. The most dangerous thing is actually apathy, immobility, feeling nothing, experiencing emptiness and, basically, that nothing matters.

However, if we try to use anger in our favor and make changes, then things will gradually start to improve and we’ll find a new balance. We just have to channel the negative energy and turn it into something positive that melts away the problems we’re facing.

Start over again by coming face to face with yourself

Some say that despair is when our darkest side imprisons us. Our darkest side is the one that wants us to be weak and lost. Carl Jung pointed out that the purpose of psychological therapy is transformation and, above all, to achieve that point in our lives where we find true meaning to our existence.

Despair forces us to talk to ourselves, to confront our darkest side. It is, therefore, our obligation to accept the “dark side” that Jung refers to and to be able to defeat it. Only then will we be able to reach that brighter and stronger side where we can find hope and safety again.

How Can We Deal with Despair?
How can we define despair? We could say it's having no hope, feeling an inner emptiness, thinking that there is nothing left. Read more »
Link copied!
Interesting Articles
Emotions
7 Strange Emotions we all Feel Sometimes

To understand these common emotional issues you need to know where they're coming from. Knowing and accepting their cause is the first step towards getting better and it'll help you…