The casual manner in which we talk about bipolarity has little or nothing to do with clinic bipolar disorder. Today, we'll talk a little bit about it, paying special attention to how couples need to adapt since bipolar disorder and relationships aren't mutually exclusive. 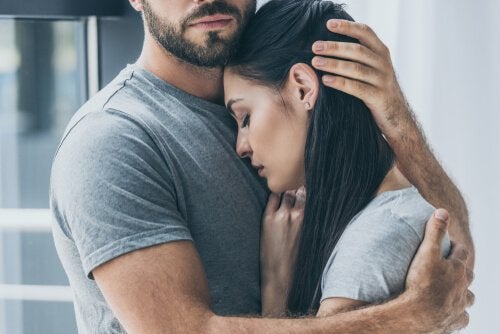 The most common symptoms of bipolar disorder are sustained, quick, and drastic changes in someone’s mood. These fluctuations considerably affect an affected person’s ability to adapt. In this regard, bipolar disorder and relationships is a complicated combination.

Maintaining a meaningful relationship requires knowledge of one another, understanding, flexibility, and also certain stability. Relating to someone who experiences manic and depressive episodes is an obstacle in the path of relationships.

In this article, we’ll explain what bipolar disorder is and how it conditions the social circle of the person who suffers from it.

People erroneously refer to changes in their opinions, thoughts, and feelings as bipolar traits. That is, it’s believed that being happy one day and sad the next is ‘bipolar’. However, that’s not the case. A series of diagnostic criteria must be met in order for a person to be diagnosed with bipolar disorder.

Nevertheless, being very happy one day and very sad the next doesn’t mean a person is bipolar. Most people display mood or personality changes often. This doesn’t necessarily mean they’re mentally unbalanced.

Bipolar disorder and relationships is a complicated combination. However, when the disorder is controlled and the person is stable, it’s possible for them to lead a perfectly normal life. In this sense, people with bipolar disorder may fall in love like any other person, unless they’re in a manic phase where they’re so euphoric and positive that they might confuse their feelings.

That is to say, at a general level, falling in love or the beginning of a relationship are the same in people with bipolar disorder as in mentally healthy people, but one must be cautious not to initiate a romantic relationship during manic episodes.

Nothing is further from the truth. Thanks to psychiatric medication, therapy, and psychological monitoring, a bipolar person is able to maintain stable relationships.

Bipolar disorder and changes of opinion

Bipolar disorder isn’t necessarily related to changes of opinion. For this reason, we don’t have to imagine that a person with bipolar disorder will constantly change their ideas, attitudes, motivations, and goals.

However, it’s very important to consider that the energy levels of a person with bipolar disorder could significantly change from one week to the next. Consequently, this could affect previously made plans or the disposition to do things or go on trips, for example. Being in a relationship with a person who has bipolar disorder entitles adjusting to their mental and physical changes. If handled properly, it won’t be an insurmountable obstacle.

If you have a relationship with a person with bipolar disorder

In addition, daily stress levels have to be handled with special care. They trigger episodes in which a person’s mood becomes extreme. Thus, couples have to find a balance in the distribution of tasks and responsibilities so that the afflicted person isn’t overloaded.

In conclusion, people with bipolar disorder have to keep a tightly controlled routine. They have to maintain stable sleep and meal schedules and avoid sudden changes (Becoña and Lorenzo, 2001). If the afflicted person starts to feel “weird,” they’ll need understanding and empathy. Keep in mind that they’re neither guilty of the pain they feel nor of the pain they cause.

Thus, having a partner with bipolar disorder involves a lot of adaptation. On the other hand, the situation can improve with psychiatric and psychological follow-ups. The more the couple understands the disorder, the less their relationship will suffer. Remember that science advances every day in regards to mental illness and that, in principle, bipolar disorder doesn’t have to be an insurmountable obstacle in any relationship.

The thoughts and feelings we have when we look in the mirror can affect the way we relate to others and also to ourselves. The so-called "mirror syndrome" is more common than we…

Unemployment has a much uglier face than the one that's usually shown: the invisibility and stigma experienced by those who…

Psychology
A Toxic Relationship Between Parents Has Consequences for their Children

Anyone who psychologically abuses their partner, anyone who is taking advantage of, looking down on, humiliating, and destroying them and…