Cognitive Distortions: All About the Fortune Telling Bias

Discover the fortune-telling bias in this article! 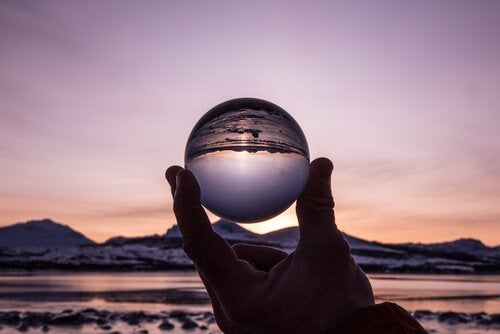 We all have expectations. Therefore, in a way, we’re all condemned to the fortune telling bias. You’ve probably thought that something would happen in a certain way at least once in your life. Another very common thing is thinking you know exactly how you’re going to feel in a determined situation. Also, you most likely have predicted another person’s behavior before. In fact, we do it every day without even realizing it.

The truth is that we spend our lives making predictions about the future. We sometimes think things are going to go wrong for no reason. Thinking this way is a basic recipe for anguish and anxiety. This is what the fortune telling bias is all about.

The fortune telling bias is a kind of cognitive distortion. Believe it or not, we’ve all been victims of it at least once. Cognitive distortions have been thoroughly analyzed in the context of cognitive-behavioral therapy, especially in rational emotive behavior therapy. Let’s see what this therapy consists of.

Rational emotive behavior therapy (REBT) raises many interesting and important ideas. In fact, it’s one of the main cognitive-behavioral therapies. Basically, the theoretical foundation of this therapy lies in cognitive psychology and behaviorism. Some of its basic principles are:

The term cognitive-behavioral is very generic and refers to therapies that integrate both cognitive and behavioral techniques. They have an empirical foundation (meaning they’re verifiable) and require the patient to participate actively during the therapeutic process.

As we mentioned above, the fortune telling bias is a cognitive distortion identified in the context of rational emotive behavioral therapy. There are many other cognitive distortions. However, in this article, we’ll be focusing on this one in particular. According to REBT, when we fall into any cognitive distortion, we distort our reality. As a result, we’ll most likely become anxious or sad.

The Fortune Telling Bias According to David Burns

Psychologist David Burns includes the fortune telling bias into another broader category of cognitive distortion: jumping to conclusions. According to Burns, we jump to conclusions when we infer ideas that don’t necessarily stem from facts. Said conclusions usually stem from our brain’s tendency to save energy in the processing of information or the need to understand an idea in a timely manner.

Now, within the jumping to conclusion bias, we can find two other biases. The first one is the main topic of this article, which is the fortune telling bias. Second, there’s the mind reading bias, which is also important to mention.

Dabid Burns defines the fortune telling bias as: “It’s as if I were before a crystal ball that could only predict sadness. You imagine that something bad will happen and take that prediction as a fact (when it really isn’t). Imagine, for example, an elementary school librarian who, during an anxiety attack, tells themselves: “I’m going to faint”. That predictions is unrealistic.”

During a therapy session, a doctor who was suffering from acute depression explained to me why he had decided to quit practicing medicine: “I realized that I’ll be depressed for my whole life. My affliction will go on and on, and I’m absolutely convinced that this or any other treatment is going to fail”.

This negative prediction about his prognosis made him feel hopeless. However, his symptoms improved shortly after starting therapy.

If We Aren’t Fortune Tellers, Why Do We Jump to Conclusions?

We’ve all felt so impatient that we’ve had no other choice but to jump to conclusions. Maybe someone asked us something we didn’t have the answer to and decided to give the quickest response we could find. Imagine that a friend didn’t answer your phone call. Days go by and they still haven’t called you back.

Knowing that your friend decided not to return your call makes you feel very sad. You start jumping to conclusions to try to figure out why they didn’t answer. And all of a sudden, you become a victim of the mind reading bias.

You feel so sad to the point you decide to move on. You don’t want to call them again to figure out what actually happened. Instead, you tell yourself: “If I call them again, they’re going to think I’m annoying and I’m just going to make a fool of myself”. Due to these negative predictions (fortune telling bias), you decide to avoid your friend and continue to feel humiliated.

Three weeks later, you find out that your friend never got your call. That’s when you come to realize that it was all in your head. You truly believed your thoughts were facts when they actually weren’t. In fact, they couldn’t have been further from the truth. Still, you jumped to conclusions because it was the easiest route to take.

As you can see, the fortune telling bias is part of the jumping to conclusion bias. Basically, it consists of jumping to hasty conclusions. Doing this will only make you suffer, so you should try to avoid doing so.

The Role of Bias in Psychological Distress
What does bias mean? It's the brain's tendency to emphasize and process certain types of information over others. It can be difficult to understand, but in Read more »
Link copied!
Interesting Articles
Therapies
Psychological Therapy or Drugs

The use of psychological therapy and drugs for treating psychological disorders is often the subject of much debate. The former has…

Wellness
3 Keys to Being More Determined