David Hume was a great philosopher whose work is still relevant to this day. Learn more about his personal life and work in this article. 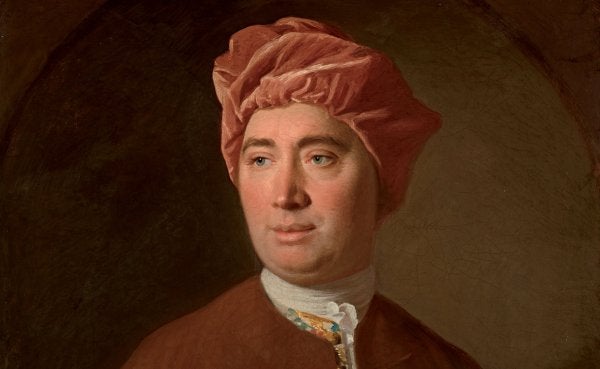 Philosophy is a discipline that tries to solve the mysteries of life, our world, and the reasons for our existence. Before science, humanity tried to answer certain questions in very different ways. First of all, there was a rise of myths and ideas about creation. After that, and due to the emergence of philosophy, reasoning became a little more objective.

Philosophy used to seek a reason for existence and the nature of the world. Over time, philosophy was divided into different branches and disciplines. Philosophers have delved into the way human beings perceive reality.

David Hume was one of the great philosophers. He highlighted the importance of learning, establishing habits, and the inexistence of innate, primitive knowledge. Of course, this position significantly influenced philosophy at the time. In addition, it also influenced psychology once it consolidated about a century later.

“There is no such thing as freedom of choice unless there is freedom to refuse.”

To understand Hume’s philosophy, it’s important to take a look at his background. In the Renaissance, two opposing knowledge-related philosophical currents emerged. One of them was rationalism. This theory stated that human beings are born with certain universal truths they use to interpret reality.

At the opposite extreme stands the other current: empiricism. Empiricism established that human beings had no innate knowledge. Therefore, they could only learn through experience. At this point, one of the maximum representatives of this current was, without a doubt, David Hume. Throughout this article, we’ll be talking about his life and work.

The life of David Hume

David Hume was born in Edinburgh, Scotland, in 1711 into a wealthy family. His father was a lawyer, although he died when Hume was a child. For this reason, his family expected him to follow in his father’s footsteps and go to law school. David Hume studied at Edinburgh College. In fact, some of his professors were Isaac Newton’s disciples.

He then decided to grant his family’s wish and went to the University of Edinburgh to study law. However, he didn’t like it, so he decided to abandon his studies. After that, he moved to Bristol in order to try to make his way in the trade world. But after a crisis, he decided that he only wanted to study philosophy.

Years later, he traveled to France and lived there from 1735 to 1737. He first lived in Reims and later in Sarthe, formerly known as La Flèche. In these cities, he wrote A Treatise of Human Nature, a work he published when he returned to London. In it, he reflects his beliefs and internal philosophy. However, the work was a failure, which led him to return to Scotland.

While residing in Edinburgh, he published the first part of his work Essays, Moral, Political, and Literary. Unlike his first publication, this one was really successful. Later, he held different positions: he was preceptor of the Marquess of Annandale, secretary of General St. Clair, and librarian of the Edinburgh Bar Association.

In the year 1763, he joined the Paris embassy thanks to Lord Hertford’s help. In this city, he established a relationship with d’Alembert, Diderot, and Jean-Jacques Rousseau. He prolonged his stay in Paris until 1769 and then decided to return permanently to Edinburgh to devote himself to writing. He died in 1776.

To internalize David Hume’s way of thinking, the first thing we have to do is explore his work and try to define the empiricist theory that he always defended.

Empiricism is based on a series of principles:

Human beings aren’t born with innate thought patterns and knowledge that dictate how they should interpret reality. For the empirical current, everything we know about reality comes from our experiences.

Experiences can be internal or external, meaning they can come from one’s own reflection and knowledge of our inner life or, on the contrary, from our sensations and perceptions of the world. For empiricists, nothing precedes experience. To them, we learn through the sensible world and nothing else. The mind is like a blank canvas we illustrate the knowledge we acquire over time on.

David Hume and John Locke believed in these ideas. Nonetheless, they differed in the limits of experience. For one, Locke believed that one could access knowledge of realities beyond the practical. On the other hand, Hume pointed out that knowledge is reduced to our perceptions, taking into account the very nature of experience.

There are two types of knowledge

According to Hume, there are two types of knowledge: impressions and ideas. Impressions are the thoughts that arise as a result of experiencing things through the senses. Ideas are abstract and ambiguous since they don’t arise from physical sensations.

Everything comes from perception. Impressions are the immediate knowledge we get from perception. Therefore, ideas are derived from impressions, which means they’re a lot more complex. Hume also talked about the concept of imagination, the human ability to modify and produce ideas.

“Beauty is no quality in things themselves: it exists merely in the mind which contemplates them; and each mind perceives a different beauty.”

There are two types of differentiated statements

David Hume differentiated between probable statements derived from a fact that may or may not occur in a specific space and time. For example, “One day the sun may not come out”. The sun rises every day. We acquired this knowledge through habit, perception, and conviction. On the other hand, he speaks of demonstrative statements which, due to their logical structure, can be demonstrated. For example: 4 + 4 = 8. Both of them build our habits, habits that will later define our way of living.

His main pieces of work such as A Teatrise of Human Nature, Essays, Moral, Political, and Literary, and An Enquiry Concerning Human Understanding reflected these fundamental principles.

In short, David Hume is one of the most important empiricist authors. Epistemology is one of the branches of philosophy that is most linked to psychology. This is why Hume greatly influenced psychology.

For David Hume, no individual is born with thoughts and emotions. Instead, they acquire and develop them from their experiences. Therefore, David Hume discarded all kinds of innatism and reinforced the idea of human learning. Undoubtedly, this author invites us to reflect on our perceptions and our way of understanding the world.

“To hate, to love, to think, to feel, to see; all this is nothing but to perceive.”

The 5 Best Quotes from John Locke
The British thinker John Locke is well known for the wide variety of subjects her pursued. Among all these achievements are his wise words and writings. Read more »
Link copied!
Interesting Articles
Authors
Harald Schultz-Hencke: A Dissident Psychoanalyst