A child's brain is limited by their level of biological development. Therefore, if they're pushed to develop certain skills that they're just not yet capable of, their childhood will be filled with frustration. 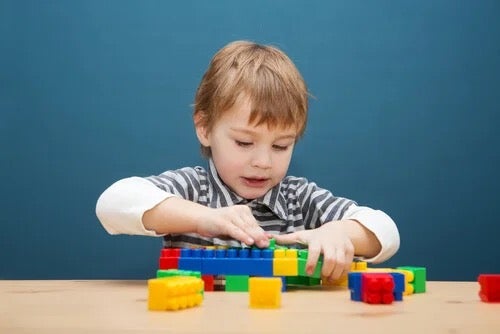 Children’s brains are like sponges. How many times have you heard this expression? In fact, this idea is so ingrained into our collective social unconsciousness that you probably wouldn’t even question it. The statement suggests that there’s nothing better than trying to transmit the maximum amount of information into a child’s brain as early as possible.

However, is this actually true? Is a child’s brain up to the age of five really as incredible as we think? Education professionals know that this idea is reflected in reality with certain nuances. Certainly, there’s one thing that can’t be denied. The fact that a sponge can’t absorb more water than it can take in.

A child’s mind isn’t an empty receptacle. It isn’t a closet you can fill with all sorts of objects. Furthermore, the human brain doesn’t just gobble up the information it receives from the environment. It processes it, breaks it down, and has to make meaning from it. In fact, learning is an active process that’s directly linked to emotion.

Children need good foundations on which to build their knowledge. These foundations must be based on affection and security. Children should also be encouraged to be curious, play, and joyfully interact with everything that surrounds them.

“To look after the brain, the most important thing is affection.”

Children’s brains are like sponges: an idea that needs reformulating

Consequently, almost without realizing it, their desire for their children to be educated results in them becoming overstimulated. Furthermore, they might even have higher anxiety levels than their parents. This happens because, for years, parents have heard that children’s brains are like sponges. Hence, they tend to try to accelerate stages in their children’s development. However, they aren’t taking into account the fact that the brain also has different stages of development. Above all, it has needs.

Children’s brains have potential but are sensitive to excessive stimulation

It’s true that a child’s brain has great potential. In fact, after birth and up to the age of seven months, thousands of neurons will move from the interior of the brain to the frontal lobe. Later, when the child reaches the age of three, the brain attains its maximum level of plasticity.

In a society based on immediacy and competitiveness, many parents want their children to learn certain skills as early as possible. For this reason, children often end up with busier agendas than their parents.

It seems that things have become rather distorted. If games aren’t educational, they now tend to be disregarded and considered useless. However, the whole purpose of games in childhood has always been fun and enjoyment. This distortion is further reflected in how easily active children today are labeled as hyperactive. This unhelpful kind of outlook doesn’t necessarily make a child the brightest, and it certainly doesn’t make them the happiest in the playground.

While it’s true that children’s brains have great potential, like any other maturing organ, they go through certain stages. For example, it’s impossible to teach a child to read or write if they haven’t yet mastered the visual processes that allow them to focus, interpret, and discriminate between symbols. Or when they haven’t yet achieved hand-eye coordination.

In Finland, experts don’t prioritize literacy skills before the age of six. They work on other skills instead. Skills to help a child build a good foundation in their brain that later promotes learning. These skills are:

Finally, while it’s true that the first decade of a child’s life is crucial to their development, they shouldn’t be overstimulated. Furthermore, symbolic play should never be disregarded. It enhances a child’s spirit of creativity and fosters good emotional intelligence. In addition, it promotes movement, interaction with the environment, curiosity, and the pleasure of discovery, among others.

For this reason, the idea that children are like sponges needs to be reformulated. Children are little people. They deserve maximum learning opportunities as well as love and affection and the chance to enjoy the best kind of childhood. What they don’t need is pressure to conform to unrealistic ideals.

How to Help Your Child’s Brain Develop
The first three years of life are crucial for a child's brain development. This is the time when your child is developing their social, emotional, linguistic, cognitive, and motor skills -- all amazingly fast. Read more »
Link copied!
Interesting Articles
Brain
Basal Ganglia - Anatomy, Physiology, and Function