Children Sleeping with Parents: Is It Healthy? 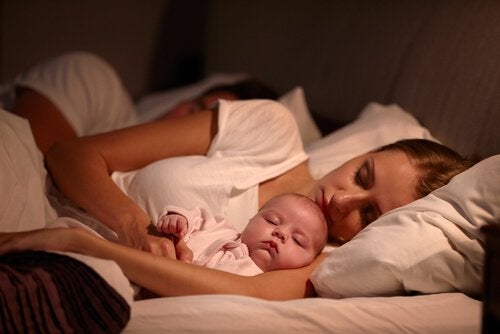 Sleeping is one of the most pleasurable physiological experiences that a human being can have. Besides the pleasure that a good sleep gives us, sleep is essential for conserving energy, strengthening our bodies and learning new information, as well as improving the immune and endocrine systems. Today we will look into a question: is children sleeping with parents a healthy thing?

When we are born, we must first go through an adaptation process until we can start to sleep soundly. It is virtually impossible that a baby will sleep the whole night, and what usually heppens is that there are frequent wakenings accompanied by crying. This often ends up with desperate parents who don’t know what to do for their child (and themelves) to get a good sleep. And so, we ask the question: should children sleep with parents?

The key to it all is to have a good dose of patience and not to forget that the child will end up sleeping sooner or later, just like all children do.

Currently, a trend called “Natural Attachment” has been developed that encourages the children to sleep in the same bed as the parents until the day they decide to leave. The argument is that they will suffer less as a result.

This school of thought, which is increasingly followed in the West, has generated much controversy. There are parents who defend it tooth and nail, claiming it will have a beneficial impact on the child’s self-esteem and confidence. There are also others who are not in agreement at all.

Where does the idea of sleeping with parents come from?

Advocates of this type of parenting base their opinions on studies conducted by psychoanalyst John Bowlby. He developed what we know today as “Attachment Theory“,  but the good (or bad) news is that it has nothing to do with what the natural attachment movement proclaims.

Bowlby was born in London, into a high class family. His father was a surgeon to the Royal Family. As was common at the time, he was cared for by a nanny, who was his main source of attachment. He saw very little of his parents.
At four years of age his nanny left, a separation that he described as tragic. Later, when he was seven, he was sent to a boarding school where he felt very anxious and insecure.

It is quite normal that this child felt this way and that later, as an adult, he should carry out studies that would confirm that attachment is crucial in the first six months of the baby’s life.

Should children sleep with parents?

Bowlby discovered the importance of this link by observing that children who suffered extreme deprivation of attention and affection were more prone to school and social failure, to mental problems and to chronic diseases.
But note that we are talking about extreme deprivation, abuse, neglect or abandonment. The theory has been tremendously distorted today and many families think that attachment is built by spending 24 hours a day pampering the child: carrying it as long as possible, attending to all their crying immediately, extending the period of breastfeeding or sleeping in the same bed for several years.

“This movement is a deception. It has taken the same name as a field of science that studies the development of human beings, and that causes a lot of confusion”, says one of the main references in scientific research on attachment, the psychologist Alan Sroufe.

The studies of Sroufe, professor emeritus of the University of Wisconsin, studying development in children for more than 30 years, have finally shown that a secure attachment is not obtained by sleeping with the parents, prolonged breastfeeding or carrying the child, but by being able to respond to the signs that the baby emits in a sensitive, appropriate and effective way. The attachment will be formed with the person who is able to do this and who obtains the trust of the child.

We must be cautious when interpreting theories, because nothing is black or white when we talk about statistics. Neither should we judge those who make one decision or another with their families. William Sears, a fervent supporter of the shared bed, argues in favor of this saying that excessive crying in the baby can be harmful to their brain due to high exposure to stress hormones.

But Sears exaggerates again because the stress of a few nights of insomnia cannot be classified as chronic and compared to the stress suffered by Bowlby, who received the negligence and abandonment of his parents. It is obvious that it is not the same thing.

Conversely, psychological techniques for sleep training are supported scientifically and do not produce any emotional damage in children, according to the 52 studies conducted in 2006 by the American Academy of Medicine.
The conclusion we can reach after considering all this information is quite simple: each family has to do what their instinct says, but always taking into account that there is no single method to make children more or less safe, full of self-esteem or emotionally strong.

It is not what is practiced, but how it is practiced. To do this successfully, we must be able to interpret the child’s signs and know how to discern when there is a real need for proximity, sleep, hunger or any other need.
Neither one extreme nor the other is totally healthy; everything depends on how we do it. Giving in to all the child’s claims can also damage their self-esteem and, above all, make them intolerant of the frustrations that they will find in their lives in the future.

On the contrary, being totally negligent of their needs is not the best way to raise a child: it depends on us and they need us to respond when necessary.

So, to sleep or not to sleep with parents? Everything should be done with moderation and without ignoring science either. You can choose to sleep for pleasure with your child, but don’t think that they will be more prepared for life than others because of that. On the other hand, remember that people are creatures of habit and teaching a child to sleep in their room can be very beneficial for their mental health and for the rest of the family in the long run.

Psychology
Feeling Love and Hate at the Same Time

"Love and hate are not blind,  but they are blinded by the fire that they themselves carry with them." -Nietzsche-…

We've all developed our own non-transferable morality. We have values which not only separate "good" from "evil" in the abstract…