Chaos Theory or "The Butterfly Effect" 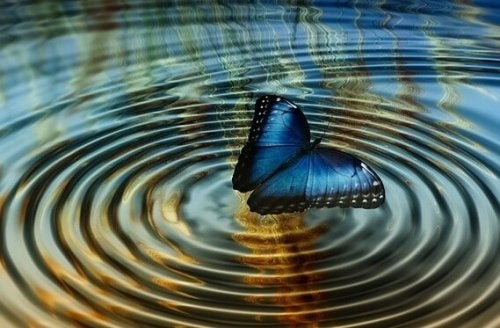 We’ve all heard of the butterfly effect. It’s the essence of chaos theory. Chaos theory was first defined by James Yorke and T.Y. Li in 1975 and it reminds us of something essential. The world doesn’t follow a predictable pattern. Whether we like it or not, chaos is a part of our lives. There are small spaces where change occurs and it’s impossible to predict the effects of certain events.

Chaos theory is usually associated with math or physics because those subjects are its origin. However, we often forget that these sciences directly affect our daily lives.

In fact, few theories have such a direct impact on our behavior and understanding. James Yorke himself summarizes this theory by saying, “The most successful people are those who are good at plan B”. You have to be ready to change plans at any moment.

“In life, it’s important to be flexible. I don’t plan things. I prefer to discover them.”

Everyone can tolerate a little uncertainty. At a certain point, the brain becomes more alert as you think about all the things that can happen.

However, we mostly prefer stability. We like knowing that two and two is four. It’s comforting for us to think that what we have today will be there tomorrow. It makes us feel that we have everything under control.

However, chaos theory makes us aware of an undeniable fact. The rhythm of life isn’t predictable like the ticking of a clock. There are many unpredictable and uncontrollable things around us.

The other shoe can fall at any moment. It’s the butterfly that flaps its wings in the United States and arrives in Europe as an economic crisis. It’s the white ball we hit on the pool table that makes the other balls scatter in all directions.

Chaos theory tells us that the outcome of an event depends on different variables. We can’t always predict how the variables impact the outcome. There’s always a margin of error, a space for change, a hiccup that changes everything at the last moment. Sometimes a small change makes a huge impact and makes the entire plan chaotic.

Some believe that chaos theory is one of the most fascinating fields in modern mathematics. It’s the science that tries to predict the unpredictable.

You can imagine what that must have been like when it was first introduced. Remember that science up until this point aimed to eliminate uncertainty. Its purpose was to explain the behavior of everything with logic and hard data.

However, now we accept that anything can happen at any given moment that may change everything. In fact, meteorologists and mathematicians work with this uncertainty daily.

In 1961, Edward Lorenz tried to create a computer that could predict time. During the process, he observed that the entire system began to exhibit unpredictable behavior. This was due to a number rounding error. Later, this experience would help to define the butterfly effect.

Chaos not only lives in nature. It’s also in weather forecasts and even biology. At any moment, the golden thread of unpredictability can enter the head of the needle. Thus, chaotic things happen around us daily that we don’t even notice. Chaos moves in the economy, thermodynamics, astronomy, and even in psychology right under our noses.

Today, we know that any small change in the brain, like the misfire of a neurotransmitter, may lead to drastic changes in behavior. Moreover, the chaos theory also applies to psychiatry. There are times when a prescribed drug affects the patient in the opposite way that it’s predicted to.

“The slight flutter of the wings of a butterfly can be felt on the other side of the world.”

How to apply chaos theory to everyday life

We all try to avoid chaos. It’s the only way we feel safe. The predictable allows us to leave home without fear. It allows us to create our lives and the future with confidence. However, James Yorke, the father of chaos theory, says you should be ready to change the plan at any time.

In a way, his principle has a lot to do with another theory called the black swan. Essayist, economist, and mathematician Nassim Nicholas Taleb coined the term.

In his notable book, which bears the same title as the theory, he reminds us that, to the naked eye, everything seems predictable. But at any given moment, something strange or chaotic appears that we don’t expect. Then, we’re forced to accept and to make sense of the event.

But instead of having to react at the moment that the chaos appears, we’re already prepared. James Yorke reminds us that people who succeed and are happy are those who always have a plan “B”.

Let’s try to develop a flexible mindset that doesn’t have to react to unexpected events. Approach the unexpected with acceptance and curiosity. Because many times, an opportunity arises from chaos. Expecting the unexpected helps you to move to the rhythm of life.

Put Your External Chaos in Order to Be Happier
Read more »
Link copied!
Interesting Articles
Culture
Want to Find Your Ideal Partner? There's an App for That

Technology, lack of time, and the loss of direct communication are social phenomena that are changing the way we interact…

Culture
The Body Language of a Man in Love

We all know that the average man has a hard time expressing his true feelings. Although this isn't as pronounced…