When You Have a Lost Childhood Because of Emotionally Immature Parents 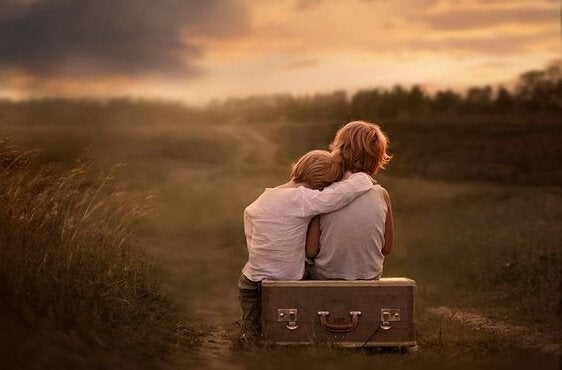 If you have a lost childhood from growing up as a child of emotionally immature parents, you probably have some big scars on your heart. Because in this kind of family dynamic children end up taking on what are really adult responsibilities. They grow up too early because of parental incompetence and neglect; their childhood is erased and their self-esteem destroyed.

Granted, nobody can choose their parents. Although there always comes a time when we, as adults, are able to choose the type of relationship we want to with them, a child cannot do that. Being born is like being dropped from the sky. In other words, some babies are lucky enough to be “caught” by wonderful, competent parents and a chance to grow up in a safe, mature, healthy way.

On the other hand, some have the misfortune of landing in the arms of emotionally immature parents and this will have huge consequences on their personalities. However, experts in child psychology and family dynamics know that in these cases two very crucial and striking things can happen.

First, parents with a clearly immature, incompetent personality sometimes raise their children to turn out equally tyrannical and immature. Second, emotionally immature parents may unconsciously encourage their children to take on the role that they as parents have given up. Hence how some children end up responsible for their younger siblings, taking care of things around the house, and making decisions that are much too big for their age.

Contrary to what you may think, this second situation will not actually make the child any more brave, mature or responsible — at least not in a way that’s healthy for a child. Instead, all it results in is a lost childhood.

Something we can all agree on is that having children does not automatically make us good parents. Motherhood, as well as healthy and meaningful fatherhood, is simply being there and giving real, nourishing affection. This way the child won’t end up with a broken heart, low self-esteem, and so much fear.

One thing every child needs, apart from food and clothing, is a mature, safe emotional environment where they feel connected to people and understand the world as well as themselves. If this doesn’t happen, everything falls apart. In essence, the child’s emotions are neglected by emotionally immature parents only concerned about themselves.

That said, these kinds of dynamics are more complex than they may appear at first glance. So let’s differentiate between the 4 types of emotionally immature parents.

Children who grow up in a home with emotionally immature parents will have to deal with feelings of abandonment, loneliness, frustration and anger.

After the lost childhood: healing the wounds

We pointed out earlier that children who have grown up playing the part of the adult in the family don’t always see themselves as stronger, more mature or happier. Letting a child of 15, 10 or even 8 years old be completely responsible for taking care of himself or a younger sibling, or having to make decisions that his parents should be making… all of this leaves really leaves a mark. It will inevitably affect his future.

“A rose gets its fragrance from its roots, and the life of an adult gets its strength from its childhood”

Now, the psychological consequences of growing up with emotionally immature parents include:

Healing the wounds that come from a lost childhood and emotionally immature parents is not easy. But it’s not impossible. Cognitive-behavioral therapy is quite helpful here, as well as simply accepting the wound. Then comes time to allow ourselves to feel anger and frustration for our lost childhood. It’s ok to be mad you were forced to grow up too fast.

Maybe you lost your childhood, but you have a wonderful, free life ahead of you to be what you always wanted to be — what you deserve. May the emotional immaturity of our parents not prevent us from having the happiness we didn’t have as children.

For Every Child Who Believes in Themselves, There Are Parents Who Believed in Them First
we must play the role of mentors, dream-makers. Parents must understand that one day their child will follow their example and not their advice. Read more »
Link copied!
Interesting Articles
Psychology
A New Nail Doesn't Drive Out the Old One

We've always heard that being optimistic helps us be more successful in life. However, it's possible that we haven't received many logical answers to why this is. Or we might not…

Suffering can crack you open deep beneath your skin and still remain unseen. It's like it lives inside you, traps and asphyxiates you, but sooner or later you'll be able to overcome it. Because the strongest…

Educational Psychology
Meaningful Learning: The Value of Learning By Doing

Are you aware of everything that happens in your brain to create a memory? Have you ever thought about the mechanisms…