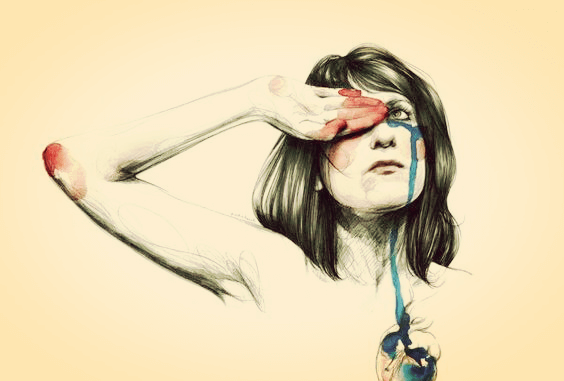 Losing a loved one or suffering from a severe disappointment can literally break the heart. This is called Takotsubo cardiomyopathy, or broken heart syndrome, a disease that deforms the heart. This painful yet hardly poetic syndrome occurs primarily among women.

Today, broken heart syndrome isn’t very well-known. It also isn’t clear why 95% of diagnosed cases have been women. However, it does occur and we can’t close our eyes to an obvious reality. Sometimes, emotions impact the heart like a ruthless whiplash and make you feel like you’re going to die, although fortunately, that doesn’t tend to occur.

It is estimated that between 1 and 2% of women diagnosed with a heart attack actually suffer from broken heart syndrome. It’s a disease that can be seen clearly on diagnostic tests because the heart is temporarily deformed on the left side. This is the clear mark of the instant in which stress became toxic to the body and shaped the organ like a skilled craftsman.

It’s important to know the triggers and learn a little more about Takotsubo cardiomyopathy.

If the sound of a broken heart were audible, it would probably become the sad soundtrack of our daily lives. However, even though most people have experienced this feeling at some point, what causes Takotsubo cardiomyopathy is more delicate, profound, and complex.

When we talk about heart problems, we almost automatically associate them with men. If this is so, it’s for a very simple reason: hormones protect women’s hearts – to a degree – throughout most of their lives, making them more resistant, but not invulnerable. However, after menopause, this small defensive barrier falls and the heart starts to become less resistant to stress and anxiety.

Enemies like stress and anxiety silently take hold of the mind and body and weaken one’s emotional fabric, until one day, all you need is one disappointment or piece of bad news for this fabric to break completely. Suddenly, a huge dose of catecholamines is released, substances that are similar to adrenaline. The heart rate skyrockets until it produces a small damage, or deformity, in the cardiac muscle.

The heart isn’t broken, but it almost is. The metaphor becomes reality and you think you’re going to die. The symptoms are similar to those of a heart attack, but patients tend to be discharged after 3 or 4 days. The heart shrinks and screams in silence, but it recovers. Treatment with beta-blockers is always effective and nothing else occurs as a consequence. However, nobody can guarantee that you won’t ever experience broken heart syndrome again…

The Danger of Everyday Stress

Like we said at the beginning, broken heart syndrome hasn’t been very well-documented scientifically. It was described for the first time in the 90s in Japan. The name refers to the bulging of the left ventricle, which resembles a trap called “tako-tsubo” that the Japanese used to hunt octopus. It is also known that it tends to occur more during the spring and summer among women who have already reached menopause.

Manage your emotions to take care of your heart

In general, the female mind tends to have a small defect: prioritizing other people’s emotions over their own. In their eagerness for protection and attention, they focus all their energy on their families, their children, their partners… Little by little, their preoccupations and delicate emotions turn into a black hole that, sooner or later, implodes.

To prevent that from happening, reflect on the following:

Give yourself time, do moderate exercise, practice yoga, and prioritize yourself as the most important person in your life. Make your heart your best weapon in those difficult times, in those environments where the only thing to do is combine your strengths and gain control over your happiness and inner peace.

The Deepest Wounds Aren’t Made by Sharp Knives

When do we say that a person is "crazy"? How do we define "madness"? Many definitions have been given and…

How often have I cried in secret without knowing that life was doing me a favor, without understanding that what had…