The functions of the basal ganglia are key to activities such as driving, art, and climbing stairs. However, they also mediate your motivation and are behind conditions such as Parkinson's disease. 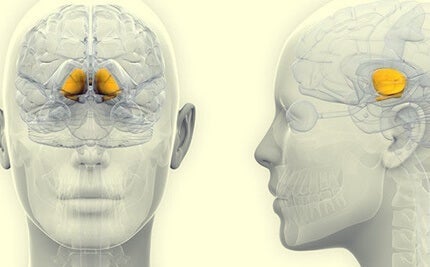 The basal ganglia are a set of groups of neurons specialized in processing information about movement. They’re key when you must use your hands to catch a ball or for moving your feet when you need to climb a ladder or when you drive, paint, or play an instrument, among other activities. These help you fine-tune and adjust every action you carry out throughout the day.

These are a set of subcortical nuclei of the brain that play a very important role. Note, as a curiosity, that they’re not part of the motor system itself. They’re actually a wide set of structures interconnected with different areas. Therefore, their purpose is to plan actions. Especially those with a specific objective that often stem from previous learning.

Neurologists describe the basal ganglia as those neural groups that define the functions of the motor cortex. They ensure, so to speak, the correct execution of any motor plan between the brain and the muscles. Thus, any alteration in these structures irremediably leads to experience alterations in movement. As it happens, for example, in diseases like Parkinson’s.

“The neural processes underlying that which we call creativity have nothing to do with rationality. That is to say, if we look at how the brain generates creativity, we will see that it is not a rational process at all; creativity is not born out of reasoning.”

Basal ganglia, what are they?

The basal ganglia, as you read above, modulates and controls motor activity. However, they carry out many other functions. Thus, studies such as the one conducted by Centro de Investigación Médica Aplicada [Center for Applied Medical Research (CIMA)] at Universidad of Navarra in Spain, indicate the following.

Composition of the basal ganglia

The striatum is the largest subcortical brain structure in the mammalian brain. It’s an area that acts as an intrinsic nucleus. In other words, it receives information and, in turn, sends it to other areas.

The caudate nucleus is related to the modulation of movement and, also, to various emotional processes. It connects to the frontal lobe and regulates aspects such as motivation, memory, and feelings of threat, among others.

The lentiform nucleus is a structure that lies just below the caudate nucleus. It’s a fairly large area (about two inches) that facilitates motor skills, regulates your posture and learning processes, and even your motivation.

In recent years, the relationship between the putamen nucleus and feelings of love and hate is under investigation. Likewise, and within the basal ganglia, it performs a basic function in automated movement tasks. It lives next to the caudate nucleus.

The pale balloon regulates the information established between the putamen nuclei and the caudate towards the thalamus. Likewise, it presents a connection with the limbic system, acting as a reinforcer of behaviors, especially those derived from drug use.

The substantia nigra is integrated into the midbrain and is also a key element of the basal ganglia. Its neurons, due to a neuromelanin pigment, give it that dark coloration that tends to increase over the years. It helps you learn, move, and orientate.

In which processes do the basal ganglia mediate?

As you read above, the basal ganglia are made up of various subcortical neuronal structures. They send each other and continuously receive information; thus, participating in processes that go beyond movement.

In fact, studies such as those conducted by doctors Ahmed A. Moustafa and Izhar Bar-Gad, from Bar-Ilan University, Ramat Gan ( אוניברסיטת בר-אילן) in Israel indicate these are key in the processes of memory and motivation. Thus, any alteration is related to conditions such as Parkinson’s disease, attention-deficit/hyperactivity disorder (ADHD), Tourette syndrome, etc.

Therefore, studying disorders such as those mentioned above has made it possible to observe which processes the basal ganglia mediated over the decades. They’re the following:

Diseases and disorders related to the basal ganglia

Much of the observed abnormalities in the basal ganglia often have serious implications. In fact, many of these diseases that are etiologically related to these structures have a degenerative nature. They’re the following:

In conclusion, note that conditions such as obsessive-compulsive disorder and attention deficit disorder – with or without hyperactivity (ADHD) – are also associated with small alterations in the basal ganglia. However, psychological treatments can be very effective in these cases.

The Two Brain Clocks that Help You Predict the Future
Did you know that we all have two brain clocks? These are neural areas located in the cerebellum and basal ganglia that can help make predictions. Read more »
Link copied!
Interesting Articles
Brain
Brodmann Areas: Characteristics and Functions