Arachnophobia, the Fear of Spiders

Spiders instill real terror in many people. Thus, arachnophobia is one of the most common phobias.  Today's article will discuss it. 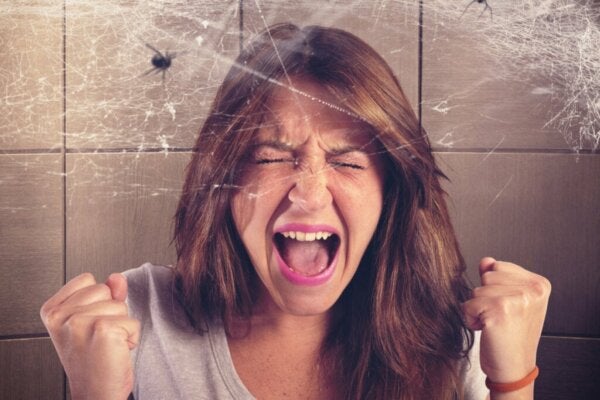 Phobias are irrational fears of specific things. The fear of animals, of spiders more specifically (arachnophobia), is one of the most common. This evolutionary response helped humans survive as a species at some point. In other words, being afraid of wild or unknown beings released enough adrenaline that allowed humans to escape. However, a phobia develops when fear is extreme and it can limit you for life.

Approximately three out of 10 people are extremely afraid of arachnids. However, this type of phobia not only includes spiders but also scorpions, mites, and ticks. Thus, even though most are afraid of large, sturdy spiders, their fear may extend to or focus on smaller spiders and any other type of arachnids.

“With all due respect to arachnophobes, I love spiders. Some might call me obsessed, but I’ve been studying spiders and spider silks for many years now and don’t see an end in sight. There’s simply too much to do.”

Animal phobias are specific simple phobias that usually develop during childhood or adolescence. They consist of irrational fears, either due to the nature of the phobia or the intensity of the fear, which leads a person to avoid that particular thing as much as they can. The symptoms manifest in many different ways.

Some people only experience some of the symptoms in front of a spider, while others may feel them at any given time. In fact, it isn’t necessary for the phobic stimulus to be present. The mere mental image of it or even something related to it will trigger a fear response.

These are some of the main symptoms of arachnophobia:

In addition, arachnophobes will try to avoid these animals at all costs. They’ll probably try to stay away from areas inhabited by spiders or where there are signs of their presence. Similarly, many of them try to avoid their appearance, while others just kill them on sight.

Generally, animal phobias are due to traumatic experiences with a given animal. Perhaps a child grew up with someone who had this phobia and, implicitly or explicitly, learned to fear these animals as well. Also, this kind of fear is often transmitted genetically.

In fact, arachnophobia is an irrational fear of these animals or a mere visceral rejection. The component of disgust that characterizes arachnophobia has made experts think it may be an evolutionary fear. A kind of advantage that helped humans survive lethal bites and other unknown dangers.

Thus, a study by researchers from the Max Planck Institute for Evolutionary Anthropology in Leipzig (Germany) assures that arachnophobia has an innate evolutionary origin. The researchers measured the anxiety of babies in front of pictures of spiders and snakes. To do so they analyzed the dilation of their pupils, which showed them how babies reveal signs of anxiety when they’re looking at photos of various animals and things, including spiders.

Is there a cure?

All phobias can be treated successfully. You can get professional help and learn some relaxation techniques that, in addition to relieving symptoms, will serve as support for systematic desensitization. This technique consists of gradual exposure to the object you fear. Thus, professionals first conduct relaxation exercises, in front of pictures of spiders, for example, until you’re able to remain calm in front of a live animal.

You can also work on your beliefs about arachnids. Generally, the lack of knowledge about these animals intensifies this fear. Thus, learn what you can about them, especially the myths that surround them. A good exercise is to gather information about the probabilities of a bite, its function in nature, and how many people have actually died from one.

However, due to its disgust component, arachnophobia is one of the most difficult animal phobias to treat. This emotion is rather instinctive and people can’t reason. Nevertheless, psychological work can help the person with their symptoms and negative thoughts.

Fear of Horses or Hippophobia
Equinophobia, also called hippophobia is the name given to the fear of horses, and it can be treated by cognitive-behavioral therapy. Read more »

For most of us, gambling, in its many forms, and sometimes perceived as just games, can be just another recreational…