In this article, we identify the factors that favor the development of generalized anxiety disorder and also those that maintain it. 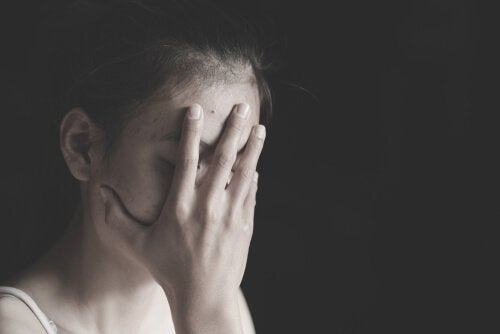 This disorder is characterized by the presence of anxiety and excessive, persistent concerns that may be difficult to control. These concerns can be over various events or activities and are the result of three or more physiological overactivation symptoms. In addition, in GAD, patients suffer from anxiety or worrying most days for a minimum period of six months.

The third edition of the Diagnostic and Statistical Manual of Mental Disorders (DSM-III, APA, 1980) initially introduced GAD as a single diagnosis. However, professionals often used it as a residual diagnosis for individuals who didn’t meet the diagnostic criteria of other anxiety disorders (1).

The publication defined GAD as chronic and persuasive worrying (2). Subsequently, the next publication, the DSM-IV-TR, characterized it as excessive, out of control concern in relation to various issues that occurs on most days for at least six months. Likewise, this excessive worrying causes discomfort and/or functional deterioration.  Also, it consists of at least three of the following aspects:

Psychiatric medication and cognitive behavioral therapy (CBT) are used to treat GAD (3, 4, 5). Pharmacotherapy can be effective in reducing anxiety symptoms. However, medication doesn’t seem to have a significant impact on worrying, which is the defining characteristic of GAD (3).

Avoidance model of worry and GAD

The avoidance model of worry (6) is based on Mowrer’s two-factor theory of fear (1974). Likewise, it also derives some of its concepts from Foa and Kozak’s emotional processing theory (7, 8).

The avoidance model of worry states that verbal linguistic, thought-based activity, which arises as an attempt to inhibit vivid mental imagery and associated somatic and emotional activation. Specifically, this inhibition precludes the emotional processing of fear that is theoretically necessary for successful habituation and extinction of feared stimuli.

According to this model, individuals with GAD find situations of uncertainty or ambiguity as ‘stressful and irritating’. As a result, they experience chronic worrying in response to those situations (10).

These individuals believe that worrying will help them cope more effectively with the events they fear. Or they could even believe that it will prevent such events from happening (11, 12). This worrying, along with the feelings of anxiety that accompany it, leads to a negative approach to the problem. Likewise, it also leads to cognitive avoidance, which reinforces worrying.

Specifically, individuals who experience a negative approach to the problem:

These thoughts only aggravate their worrying and anxiety (10).

The metacognitive model (MCM) of GAD

The metacognitive model of GAD postulates that individuals with GAD experience two types of worry. Wells, the author of the model, defined Type 1 worries. This is when a person worries about non-cognitive events, such as external situations or physical symptoms (Wells, 2005).

For Wells, individuals with GAD begin to worry about their Type 1 worries. They worry that their worrying is uncontrollable or that it could be inherently dangerous. So, this ‘worrying about worrying’ (i.e. meta-concern) is what Wells called a Type 2 worry.

Wells associated these Type 2 worries with a set of ineffective strategies that aim to avoid worrying. In particular, these strategies consisted of attempts to control behaviors, thoughts, and/or emotions (10).

The emotional dysregulation model (EDM) draws from the literature on emotion theory and the regulation of emotional states in general. This model consists of four central components: (10)

According to authors Roemer and Orsillo, ABM involves four components:

Therefore, the creators of this model suggest that individuals with GAD have negative reactions to their own internal experiences, and are motivated to try to avoid these experiences, which they do both
behaviorally and cognitively (through repeated engagement in the worry process.

In conclusion, the five theoretical models share an important characteristic. In particular, they all focus on the consequences of avoiding internal experiences as a coping strategy. In recent years, research has advanced considerably in terms of the theorization of this disorder. However, there’s a need for more basic research on the predictive components of the five models.

The Ancient Greek Cure for Depression and Anxiety
The body and mind were very important for the Ancient Greeks. The cure for depression and anxiety that we discuss here today is attributed to them. Read more »
Link copied!
Interesting Articles
Psychology
Anxiety and Its Questions

Psychology
Cardiophobia - The Fear of Having a Heart Attack

The fear of having a heart attack and dying is called cardiophobia. Most people have experienced the anxiety that comes…

"The Lucifer Effect: Understanding How Good People Turn Evil" is the title of a book by Philip Zimbardo. In it,…

Psychology
How do You Fight Emotional Fatigue?

Many of us feel that there are not enough hours in the day to do what we need to do.…