Processing Disgust - How Does the Brain Do It?

There's a lot of talk about how the human brain processes happiness, sadness, and fear. But what about disgust? This basic emotion is often forgotten but it's helped humans survive over many millenniums. Continue reading to find out more about it! 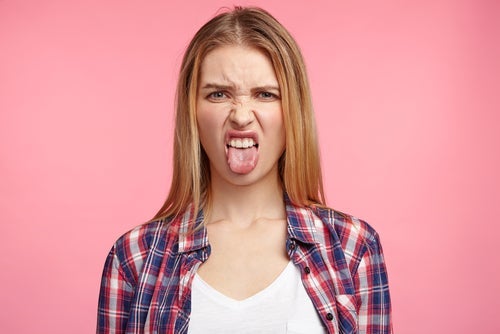 Processing disgust is one of human’s most basic functions and has kept the species alive throughout several centuries. And although it’s sort of forgotten by psychology, there’s already enough information available on how the brain does it. One can define disgust as a feeling of strong distaste for certain objects or substances. It makes you want to expel, distance yourself from, or simply reject it.

This emotion is universal and recognized as one of the six basic ones common in all cultures and even in those with sensory limitations. It comes with a characteristic facial expression. For instance, there’s an elevation of the upper lip, a frown, and a lowering of the corners of the lips.

In addition, it usually comes along with a decrease in tension, a decrease in galvanic skin response, nausea, a decrease in heart rate, a feeling of aversion, distancing oneself from the object, respiratory changes, and characteristic vocalizations such as “Ew!”

The nature of disgust

You must keep in mind that experience dictated the model for the human brain takes, as a species and individually. Although you may not know it, humans had a sort of behavioral immune system before they developed the sophisticated one we currently have.

The aforementioned basic system used to act as a barrier that protected humans from contact with parasites and other potential dangers.

The advantage derived from processing disgust is mainly about avoiding disease. Thus, even though there are cultural differences about what disgusts people, the main things that trigger this emotion are:

As innate as this emotion is, you must keep in mind that people acquire certain aspects of what disgusts them. This is where cultural and developmental differences are more apparent. For instance, children up to the age of two don’t seem to know what disgust is.

However, one could explain this by saying that they’re still under the care of their parents. Mainly because the human species is quite immature and vulnerable throughout the first years of life. Thus, toddlers eventually develop this emotion by observing their parents’ behavior.

The brain and how it goes about processing disgust

To know how your brain processes disgust, you must basically take two regions into account: the insula and the limbic system (the tonsils and the hippocampus).

The insula receives information from the sensory pathways and sends information or stimuli to other structures, such as the limbic system, the ventral striatum, and the orbitofrontal cortex. This region seems to be responsible for experiencing disgust, as well as for recognizing expressions of disgust in other people.

For example, the insula of people with Huntington disease doesn’t work properly, so they have trouble experiencing this emotion. In addition, the stimulation of the insula leads to nausea.

The limbic system, and specifically the amygdala, is related to negative emotional processing, such as fear, disgust, and learning. In fact, recently, a group formed by members of the University of Granada and the Autonomous University of Baja California detected the specific region of the tonsil that causes the rejection of unpleasant flavors.

Until now, scientific studies claimed that disgust was a part of certain brain areas, capturing images of those areas they thought were involved. Now, thanks to new technologies, such as functional magnetic resonance imaging, one can clearly see how the brain dynamically processes disgust.

About a year ago, a group of researchers from Catalonia subjected 30 people to a study. In it, they presented said people with a six-minute video that featured shots of many appetizing dishes. And they also showed them another one that had shots of food next to other unpleasant things such as cockroaches, people eating worms, etc.

The results revealed that the brain is still processing this emotion 40 seconds after looking at the unpleasant images. In addition, the brain images showed that not only a part of the brain activates in the face of a disgusting scene or object, but nearly half of it.

As for processing, scientists say there are three stages:

You may be extremely disgusted with some stimuli that didn’t initially bother you. Thus, there are several psychopathological disorders that are either related or at least have a disgust component.

There are some examples of anxiety disorders such as bipolar disorder or obsessive-compulsiveness in which there’s an excessive concern about the spread of germs and dirt.

The component of disgust is crucial in some phobias such as hemophobia or social phobia. As for the latter, it seems that some people feel a certain repulsion or aversion to interacting with people. Finally, the role of disgust in eating disorders is still under investigation.

Disgust: The Forgotten Emotion
Disgust is a biological adaptation that protects us from rotten or toxic food. But we can also feel disgusted about ideas. Read all about it here! Read more »

Link copied!
Interesting Articles
Brain
Empty Sella Syndrome - Have You Heard About It?

Today's article will discuss thalamic pain syndrome. Although you may not be aware of it, the thalamus is one of…