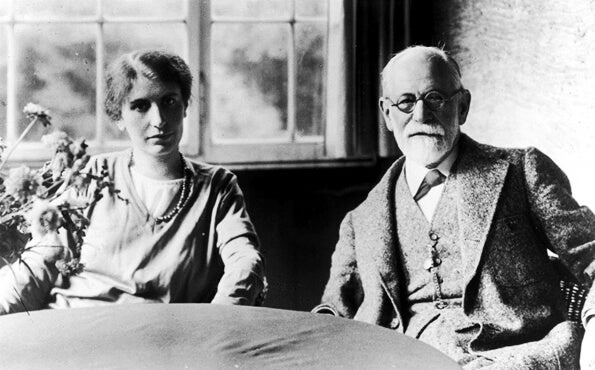 Anna Freud was an unwanted daughter. She was the youngest of 6 children and the only one who became a devout and almost self-denying disciple of her father, Sigmund Freud. She was a “guinea pig” for psychoanalysis and also heir to his legacy. A good part of what Anna Freud contributed to the field of child psychology was pioneering and truly invaluable.

The name of this interesting woman fortunately did not fade into the haze of oblivion. Her name hasn’t disappeared into the void where other female figures were pushed into by the great men in their lineage. Ada Lovelace is one, a remarkable mathematician and forerunner in programming languages; a woman who for many was no more than Lord Byron’s outstanding daughter.

“I was always looking outside myself for strength and confidence but it comes from within. It is there all the time”.
-Anna Freud-

Anna Freud was also the outstanding daughter of the great father of psychoanalysis. She was a girl who came into the world unbidden but quickly managed to carve a niche among her many siblings and family members who blindly idolized her father. Anna was unruly, restless, and sought more than anything the admiration of her father. Unfortunately he was a man who treated her more as a patient than a daughter.

It was in the 1920’s that, as a member of the Vienna Psychoanalytic Association, her life began a new direction. Sigmund Freud had already been diagnosed with oral cancer and Anna was determined not to leave her father at any time. However she thought she could now direct her career into other fields. Instead of practicing as a psychoanalyst, she decided to treat young children pedagogically under psychoanalytic guidelines.

What began in Vienna in 1925 continued in England and in the context of World War II. It was a key stage where her true work would begin. It would continue, in a certain way, that of the now deceased Sigmund Freud, but incorporate other approaches.

Anna Freud and the psychology of the ego

Anna Freud was always a practical woman. She didn’t like to theorize too much. Thus her books are full of interesting case studies as a basis for justifying and developing her ideas. What “Miss Freud” most wanted was for psychoanalysis to have therapeutic use in the lives of people, especially children.

Among the many defense mechanisms articulated by Anna Freud we find:

The British stage and child psychology

In 1941, Anna Freud opened a kindergarten and several homes for children on Wedderburn Street, in ​​Hampsteaden, London. In those days she had also read Maria Montessori and was moved by all those little ones, traumatized war. So she decided it was time to move forward and work for progress in this field that interested her so much.

So the classic therapist’s couch was set aside for real playrooms, a much more suitable context for children and spontaneous expression.

The importance of early relationships

Throughout her life Anna Freud defended the need to care for and address a child’s early relationships as an essential mechanism for proper development. Her work with children who had been abandoned or severely neglected, for example, laid the foundation for multiple subsequent lines of research.

“What I have always wanted for myself is much more primitive. It is probably nothing more than the affection of the people with whom I am in contact, and their good opinion of me”
-Anna Freud-

Also, another pioneering initiative was the recommendation that children should not be hospitalized more than necessary. Nor should orphaned or abandoned children stay in orphanages for a long time. Children need family intimacy and a mother figure. Any distance from family relationships (or surrogates) causes stress, fear, and has an impact on the child’s brain and psychic development.

Anna Freud worked to make her reception centers feel like “family units”. This way every child abandoned or traumatized by war found friends — siblings — and a surrogate mother or psychotherapist to treat their trauma and recurring nightmares.

The “black demon”, as his father called her because at times she had quite a strong will and eccentricities, never betrayed the theoretical heritage of her father; in fact, she improved it. Thanks to her, the edges got smoothed down. She dealt with the loose, careless ends left by her father and his more shallow exploration of childhood education.

The therapeutic practice of Anna Freud was dedicated exclusively to children. Moreover, her very life was dedicated to protecting children lacking even basic care. She created multiple residential nurseries, a clinic and a training center for psychotherapists specializing in child psychoanalysis.

Miss Freud died at the age of 82, her mission fulfilled. She was the mother of psychoanalysis and guardian of its progress.

Culture
What Our Pupils Reveal

Culture
Being Paralyzed by Fear: Why it Happens

Today, we'll talk about why we're paralyzed by fear instead of actively reacting to certain stressful situations. Why do our…