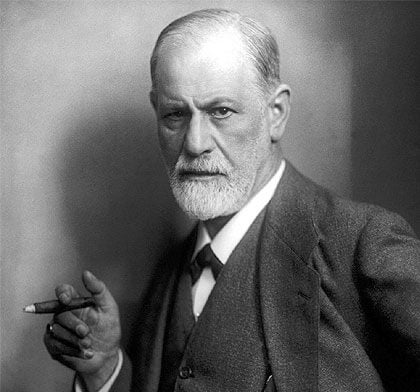 Sigmund Freud, known worldwide as the father of psychoanalysis, is one of the most influential, and most controversial characters of the twentieth century. He is known for having created a completely new approach to the understanding of the human personality.

Freud’s theories were the basis for a school of psychology that quickly rose to become a dominant force for the understanding of the mind and behavior. The 1899 publication of his book The Interpretation of Dreams established the basis for theories and ideas that formed the field of psychoanalysis.

However, despite being one of the most famous characters of our time, there are many interesting things that you surely do not know about him. To continue, we will delve into some of the most interesting facts about this physiologist, physician, psychologist and thinker who changed the way we see the mind.

Sigmund Freud was the eldest of eight children

Freud was born May 6, 1856 in Freiberg, Moravia (now, Příbor in the Czech Republic). His father, Jakob was a wool merchant, and had two children from a previous marriage. His mother Amalia, was twenty years younger than her husband. The failure of his father’s business forced the family to leave their home to move to Vienna.

Freud’s parents had seven more children. However, Freud often describes himself as his mother’s favorite, something that may be relevant according to the way he thought of himself. In fact, on one occasion, Freud himself suggested: “I have found that people who know they are preferred or favored by their mothers give evidence in their lives of a peculiar self-sufficiency and an unwavering optimism that often bring real success to their possessors.”

Freud was an advocate and a consumer of cocaine

Before its harmful effects were discovered, cocaine was often used as an analgesic and to improve mood (thanks to its euphoric capacity). It was even used in the formulation of common household products, soft drinks and throat lozenges. Freud was interested in the potential antidepressant effects of cocaine and defended its use for different purposes.

At that time, it was considered that cocaine was a panacea for all kinds of pain. However, when the addictive and harmful side effects of cocaine became known, Freud’s medical reputation was affected, and he himself had become an addict.

Freud became a doctor to marry the woman he loved

At the age of 26 years-old, Freud became infatuated with a 21 year-old woman named Martha Bernays, whom he began dating two months after they met. But he was a poor student who still lived with his parents and his work in the science lab was not enough to support a family.

Six months after he met Martha, he abandoned his scientific career to become a doctor. He trained for three years at the Vienna General Hospital and was rarely able to see his girlfriend, who had moved to Germany. After four years of waiting, Freud and his girlfriend were married. The couple had six children. Regarding his marriage, historians say that he had an affair with his sister-in-law Minna.

Although Freud’s theories are often criticized or rejected by current psychotherapists, many continue to use the method’s of the famous psychoanalyst as a basis for their therapies. Psychoanalytic therapy, also known as “talk therapy,” plays a key role in the therapies of current analysts and has become an important part of many therapeutic techniques.

The use of talk therapy tries to bring patterns or significant events to light which may play a role in the patient’s current difficulties. Psychoanalysts believe that childhood events and feelings, thoughts and unconscious motivations have an important role in mental illness and maladaptive behaviors.

Freud left Vienna because of the Nazis

When the Nazis invaded Austria many of his books were burned along with those of other famous thinkers. His view of the matter is curious, to say the least. It is said that on one occasion, Freud told a friend: “We are making progress. In the Middle Ages they would have burned me, nowadays they are happy to be burning my books.”

Freud and his daughter Anna were questioned by the Gestapo and thanks to her friend Marie Bonaparte, she was able to secure their passage to England. Bonaparte also tried to rescue Freud’s four younger sisters, but was unable to do so. The four women died in Nazi concentration camps.

Facts About The Theory of The Unconscious of Freud

The unconscious is structured like a language. What are some of its features? See more

Link copied!
Interesting Articles
Culture
It Should be a Requirement to Tell this Story to every Child in the World

“A child can teach an adult three things: to be happy for no reason, to always be busy with something,…