Acceptance and Resignation Are Different Concepts

Acceptance and resignation may seem like similar concepts, but they aren't. Actually, their meanings have rather different connotations, and knowing what they are can help you know yourself better. 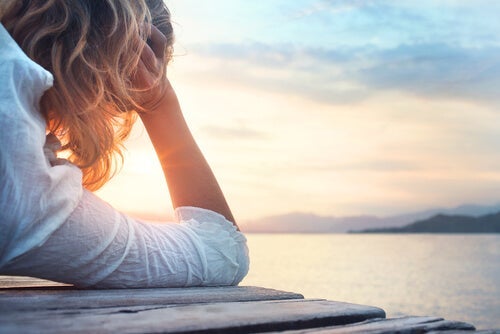 Some concepts have similar meanings and people often confuse them. For example, this is the case with acceptance and resignation. But why is it difficult to know if you’re talking about one or the other?

Well, it’s because both represent an action or a process that implies a change of perspective regarding a concrete circumstance. Accepting and resigning are vital processes that influence the control you have over that which surrounds you. Not only of the physical world but also of your ideas, expectations, and mental schemes.

In fact, both concepts usually alter what you determine to be in control of, what could be, and what’s beyond it. Precisely how you carry this out differentiates acceptance from resignation.

“Acceptance doesn’t mean resignation; it means understanding that something is what it is and that there’s got to be a way through it.”

Why is it important to differentiate between acceptance and resignation?

Differentiating them isn’t only a didactic or semantic exercise. In fact, it’ll be easier to identify your attitude or behavior towards a situation that invites you to change your perception of control if you’re familiar with both concepts.

The difference between acceptance and resignation is important in psychology. Part of the therapeutic process involves an exercise in acceptance in many of the cases that come to your attention. However, is it possible for patients to mistake acceptance for resignation? It is indeed, quite often. In fact, explaining the differences between the two is usually necessary and a part of psychoeducation.

Differences between acceptance and resignation

Given the importance of understanding these concepts, it’s best to delve deeper into what makes them different:

Acceptance and resignation aren’t similar processes in terms of willpower. Acceptance is a process you need to carry out unconsciously. Moreover, therapeutic interventions promote an increase in the degree of awareness of a problem before working on acceptance.

In contrast, resignation isn’t sought in the therapeutic framework. It occurs in a more unconscious way and produces discomfort. Sometimes, life circumstances make you give up without even realizing it.

The role of the person in a process of acceptance and in a process of resignation is different. You’re facing an active role in the first one, while the role is more passive in the second one. That is, there’s a decision-making process to change that normally affects your emotional state when it comes to acceptance.

In the case of resignation, you usually place the responsibility for your change of perspective on circumstantial factors, meaning those external to you. Hence, the person who resigns usually has a passive role in this change.

The intention behind resigning may have evolutionary logic, although it doesn’t lead you to reduce the pain you experience due to a given situation. You mainly accept something to reduce your suffering.

Accepting your reality is achieved when you stop taking yourself too seriously. That is to say, accepting doesn’t necessarily have to place you in a certain role. As a victim, for example. Moreover, not making judgments about your situation is usually one of the factors that make this exercise so hard.

The role of acceptance and resignation in your life

Sports are a part of life and are often a reflection of it. Through them, you experience life in contexts, such as defeat, loss, success, frustration, and euphoria. Perhaps, you can observe with more clarity the difference between acceptance and resignation in this representation of life.

Imagine that you practice a collective sport like soccer or basketball. Now, imagine you’re in the middle of a game and due to the score and the time left it’ll be impossible to win. Then, imagine there’s something important at stake (a final game that will allow the team to qualify for a national championship or not, for example).

At this point, an exercise of acceptance of the situation would be to continue playing with the same intensity and desire to score. Mainly as a matter of dignity, sportsmanship, or respect for the team players, including yourself.

However, resigning yourself here will surely get a somewhat different result, such as playing without the same intensity and adopting an indifferent and carefree attitude.

Acceptance isn’t an easy exercise but life predisposes you to it. A person with a chronic illness will have to face a process of vital acceptance and that process won’t always be regular or stable. Acceptance, as a process, has its ups and downs.

It’s an interesting exercise to differentiate between acceptance and resignation because, just as with any other exercise, you get better and better with practice. This type of learning is related to your feelings of happiness.

Grief Doesn’t Heal Without Acceptance
Sometimes we get stuck in a period of grief. We forget that grief doesn't heal without acceptance and, even less so, without pain. Read more »
Link copied!
Interesting Articles
Personal Development
Naggers, Complainers, and Ruminants: Three Different but Similar Perspectives

Listening is a vital skill that you can (and should!) cultivate and strengthen. In order to interact authentically with other people, learning to listen is of extreme importance. At the…