What Happens to the Brain When You Exercise?

Why does exercise improve your mood, your memory, and even help you recover from brain injuries? Today, we'll explain what happens in your brain when you increase oxygenation by exercising. 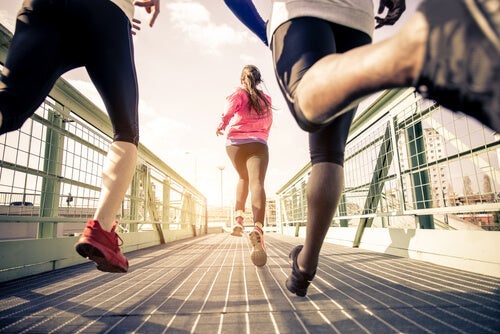 Exercise has numerous psychological, physical, and social benefits. In addition to improving your immune system and preventing certain diseases, it can also boost your mood, your self-esteem, and your physical appearance. From a physiological standpoint, exercise is great for cardiovascular and respiratory health. But what about the effects of exercise on your mental health? What happens to the brain when you exercise?

Exercise regulates the secretion of neurotransmitters, which are chemical cells responsible for the communication between neurons. It also plays a role in neurogenesis, a process by which the body regenerates neurons and creates new ones. All of that contributes to a healthy brain and good cognitive function. Next, we’ll delve a little deeper into what those processes are.

Neural growth in the brain when you exercise

A common belief is that aging and certain habits lead to neural death. In recent years, however, science has demonstrated that that isn’t the case. Researchers have seen how neurons can repair themselves, find compensatory mechanisms, and increase the effectiveness of the networks they form. This ability is called neuroplasticity, and it’s crucial for development, learning, and recovery from injuries.

In the context of changes in the brain when you exercise, one mechanism of neuroplasticity is neurogenesis. The creation of new neurons isn’t a process that happens everywhere in the brain. The hippocampus, the olfactory bulb, and the subventricular zone of the lateral ventricle are the areas of the brain where this phenomenon takes place.

In the last decade, researchers have focused their efforts on determining which factors encourage neurogenesis and which inhibit it. Two factors that they’ve identified so far are an enriched environment and physical exercise.

How does it happen?

Scientists don’t yet fully understand how physical exercise influences neurogenesis. However, they do have enough evidence to conclude that exercise increases BDNF (brain-derived neurotrophic factor) and VEGF (vascular endothelial growth factor) levels in the body.

Researchers have found that BDNF levels double or even triple in your brain when you exercise, and drop back down to normal about an hour later. Scientists relate the protein’s increase to a 2% annual increase in the volume of the hippocampus. During the normal aging process, the hippocampus decreases 1-2%.

In a nutshell, physical exercise increases the expression of the NMDA receptor on the neurons of the hippocampus. The activation of these receptors increases calcium levels in the synopsis, triggering the activation of pathways that ultimately regulate the expression of BDNF proteins. BDNF then activates another receptor (TrkB) that’s present in parent cells in the hippocampus, which encourages the creation of new neurons.

While the mechanism that relates VEGF to neurogenesis still isn’t clear, researchers believe that it plays a direct and indirect role. On one hand, it generates changes in the parent neural cells. On the other hand, it increases the number and perimeter of the blood vessels.

An increase in blood vessels and blood vessel perimeter improves circulation and, consequently, cellular health. Researchers have seen that exercise and the resulting increase in VEGF triggers an increase in parent cells and a decrease in cellular death, modulating the expression of macrophages (immune system cells that eliminate foreign substances).

Physical exercise also triggers an increase in a variety of neurotransmitters. For example, when you exercise, your body produces more catecholamines, neurohormones that prepare your body to respond to stressful, threatening, or physically active situations.

Other neurotransmitters in this group are noradrenaline, dopamine, and adrenaline. The increase in these substances and the increase in endorphins is why physical exercise improves your well-being.

Another consequence of exercise is a decrease in cortisol, the so-called stress hormone. Consequently, the damaging effect that cortisol has on your body also decreases.

The process of neurogenesis, and neuroprotection in general, takes place primarily in the hippocampus. This area of the brain specializes in spatial learning and the consolidation of long and short-term memory. Thus, in the context of the effect of exercise on the brain, several studies suggest that regular physical exercise improves learning and memory.

As if that weren’t enough, it seems that this effect extends to other cognitive abilities as well due to its positive effect on mood and stress-reduction. Processing speed, decision-making, and selective attention may all be improved by exercise. In short, it seems that physical exercise is related to an improvement in overall cognitive performance.

Exercise and Mental Health: How Much Is Too Much?
According to a study, exercise significantly improves our perceived mental health, and it directly influences our mood and self-care behavior.  Read more »
Link copied!
Interesting Articles
Cinema, Television, and Psychology
Tarantino's Once Upon a Time in Hollywood

Culture
How Can You Strengthen Your Immune System?

To be immune to something means to be protected from it. And that’s the purpose of the immune system. It’s…