The Neuropsychology of Aging

Aging is a topic of much interest in recent years. This is due to the increase in life expectancy at birth, as well as the proportion of people over 60 years of age in the general population. 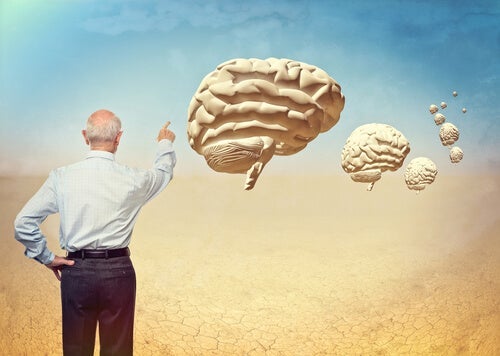 It’s a known fact that everyone ages. Although you may not like the idea, your cells age as time goes on and both your physical appearance and cognition change. Furthermore, one of the fields that study these changes at the neural level is the neuropsychology of aging.

According to the World Health Organization (WHO), aging is the consequence of molecular and cellular damage over a prolonged period of time. Thus, it leads to a gradual decrease in physical and mental capacity, at least from a biological point of view. Similarly, aging also leads to an increased risk of disease, and ultimately death.

However, in addition to biological changes, other factors also influence aging. Physical and social environments also influence the home, the neighborhood, and the communities that surround a person. Furthermore, the personal characteristics of each individual (sex, ethnicity, and socioeconomic level, among others) also affect how they age.

The neuropsychology of normal aging

The physiological changes aging causes can lead to functional losses and depend on several factors:

Pathologies such as hypertension, diabetes, or cardiovascular conditions lead to a loss of physical and functional capacities over time. For example, anxiety and depression increase the risk of cognitive decline. In normal aging, the brain and cognitive reserve go hand in hand with the degree of loss of function.

As you can see, cognitive reserve is the ability of the adult brain to maintain normal function when affected by aggression. Thus, the greater the cognitive reserve, the less the impact of the attacks. This occurs because healthy brain tissue is able to supply the loss of neurons and synapses. Thus, the same pathology would produce a greater deficit in individuals with lower cognitive reserve.

In this sense, the neuropsychological model of aging focuses on the relationships between cognition and risk factors, protective factors, the brain, and the clinical state of patients. Some aspects of cognition should be analyzed for the study of cognitive changes associated with age. For example:

Also, when it comes to processing speed and attention:

Cognitive changes in the neuropsychology of normal aging

In aging, the individual variability of each one is important, which leads you to display one or more bodily changes. However, several factors contribute to this variability:

Cognitive functions in the neuropsychology of normal aging

As humans age, some cognitive functions are more affected than others. Thus, aging affects fluid abilities more than crystallized abilities. For example, reasoning, working memory, and processing speed. The latter abilities are related to accumulated knowledge and experience.

Thus, it’s clear from the research that the deterioration of some functions begins in youth, while others remain at the same level until advanced ages. Thus, some functions such as vocabulary, general information, or memories of past personal or historical episodes remain relatively stable.

Mild cognitive impairment (MCI) manifests in many of the pathologies associated with human aging. It’s a “state” of cognitive impairment higher than that of the relevant age group that fails to meet the established criteria for dementia. Thus, according to Petersen (2001), the following symptoms must be present for at least six months in order for a patient to be diagnosed with MCI:

Thus, it seems clear that cognitive functions decrease with age. The elderly population is increasing and this is why mechanisms must be put in place to improve their quality of life. The world must be prepared to deal effectively and comprehensively with the problems that may arise. Especially those related to the progressive aging of the population.

Can We Stop Human Aging?
First alchemists and now researchers from all over the world have been pursuing their great dream: to defeat death. Can we stop human aging? Read more »
Link copied!
Interesting Articles
Brain
Does Your Brain Have a "Happiness Zone"?