A Biography of Libertarian Giordano Bruno

Libertarian Giordano Bruno's crime was to be a freethinker who didn't abide by the "absolute truths" intended to impose on him and everyone else. He was tried, convicted, and burned alive for it. The powers that be were afraid he would preach while at the gallows, so they immobilized his tongue with a nail. 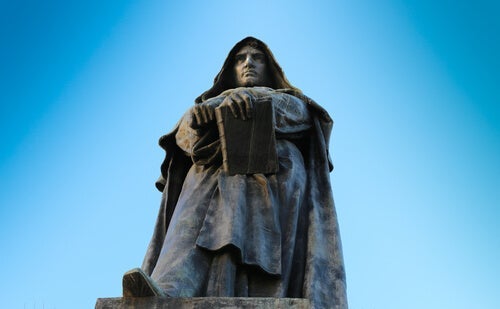 Libertarian Giordano Bruno was a very interesting character who’s become the icon of broad thinking and firm convictions. He lived in a time when certain “truths” and dogmas prevailed. Still, he knew just how to get away from that restrictive environment and think for himself. He even defended his freedom until the day authorities murdered him as a consequence.

Giordano Bruno’s actual name was Filippo Bruno and he was born in the town of Nola in Naples, Italy, in 1548. He always loved it and even referred to himself as “The Nolan”. He moved to the city of Naples at the age of 14  and enrolled in an Augustinian monastery. Then, he felt a deep religious calling that led him to the Dominican Order he became a priest with.

“Perhaps your fear in passing judgment on me is greater than mine in receiving it.”

Giordano Bruno was a deeply curious and spiritual man. He longed to learn and sought answers to most of his questions by any means possible to him. His curiosity led him to read the works of Erasmus of Rotterdam, a Dutch thinker banned by the church. It sort of speaks of how his thirst for knowledge was stronger than the duty imposed by the dogmas of his era.

Just as he studied Erasmus with great interest, he also immersed himself in the treatises of Aristotle and Saint Thomas Aquinas. He even created a mnemonic system that impressed some of his teachers and it led to a request to present it to Pope Pius V in person. He became an ordained priest in 1576 and then got a doctorate in theology.

However, Giordano Bruno incurred in two acts that ignited the anger of his community during his priesthood years. He asked that all the figures of the saints be removed from his room on one occasion, leaving only a crucifix. On another occasion, he asked a novice to stop reading a poem for the virgin and to do something more important with his time instead.

As a result of these events, there were 130 charges brought against him before the Holy Inquisition. This led him to flee Italy at the age of 28. Then, he became a wanderer and had to spend the night in pigsties and survive with very little. He moved from one place to another without being able to settle anywhere. Beyond his religious opinions, his perspective of the universe was what really aroused suspicion among religious fanatics.

A man ahead of his time

Giordano Bruno publicly stated that he agreed with Copernicus’ ideas. In his opinion, the Earth wasn’t the center of the universe. He went even further by stating that the Sun was just one more star and that there were thousands of suns and thousands of planets. Also, he also pointed out that there could be other life forms and that perhaps each of them had their own god.

Also, he said that all matter was made up of atoms, which moved by electric impulses. Therefore, spirit and matter were the same. In his opinion, neither a wafer could become the body of Christ, nor the wine his blood. Therefore, the Eucharist was a fairytale.

Libertarian Giordano Bruno wasn’t a scientist but a philosopher and theologian. He spread scientific ideas but he neither discovered nor proved them. His popularity grew and he was finally able to find peace during a long journey through Paris, and later through England and Germany. His books sold like hotcakes.

“The Nolan” tried to join Calvinism and then Lutheranism but the ecclesiastical authorities also expelled him from those churches. He received an invitation from Giovanni Mocenigo when he lived in Germany. The man was an Italian citizen who supposedly wanted to learn from him. Giordano accepted even though some people tried to persuade him not to go and spent time in that man’s house.

Mocenigo asked him to stay one more day when Bruno announced his departure. Giordano accepted and then someone locked him up in a subway that night. The next day, the soldiers of the Inquisition arrived to retrieve him. They tried him and Mocenigo testified many falsehoods. Obviously, he was convicted.

Bruno spent the following seven years in the prison of the Roman Inquisition. It was a dire place, a torture center. In 1599, they urged him to retract his claims but didn’t agree to it. Nine months later, they led him to the Campo de’ Fiori for execution. Once there, they immobilized his tongue with a nail to keep him from speaking. Then, they put a cross in front of his face and libertarian Giordano Bruno turned his head so as to reject it. They burned him alive immediately after.

Giordano Bruno – His Best Phrases
Giordano Bruno was born in Naples in 1549 and joined the Dominican Order early at a very young age. He was inspired by Saint Thomas Aquinas. Read more »
Link copied!
Interesting Articles
Biographies
Alice Herz-Sommer: Biography of an Artist and Survivor