Michelangelo Buonarroti - A Man Ahead of His Time

Michelangelo Buonarroti stood out not only for his artistic talent. He also had a strong and intense personality that's reflected in his work. 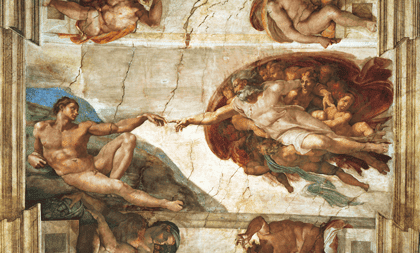 Michelangelo Buonarroti was one of the most outstanding artists of the Italian Renaissance. He was a little bit of everything. For instance, he was an architect, a painter, a sculptor, and a poet. He stood out for that talent he so easily impressed on each one of his works. Such an aesthetic realism and strength hadn’t been a part of art until he arrived.

Perhaps much of the emotional intensity he endowed each of his paintings and sculptures with was just the reflection of his own character. He wasn’t an easy man to get along with. His volatile personality, hard as the stone he used for sculpting, often went from anger to pride to a desire to be alone. He was a wealthy man, yet didn’t really care about enjoying his assets.

Michelangelo had the admiration of his contemporaries. The ecclesiastical elite adored him, the Popes wanted for him and his hands to give life to their temples, lighten their walls, and portray their most outstanding biblical figures. Sculptures such as La Pietà or David, are only two illustrative and exceptional examples of his charisma and genius. His work is only comparable to Leonardo Da Vinci’s.

Buonarroti was the leading figure of the Renaissance, a period in crisis. The rumor of a religious war was all around him together with the shadow of the Counter-Reformation and the arrival of Mannerism, another artistic style.

“The true work of art is but a shadow of divine perfection.”

He was born in 1475 in Caprese, a city in Tuscany. His well-positioned family held renowned positions in Florence at the time. Ever since he was a child, he showed a high ability for the arts. However, his father, Ludovico di Leonardo, a father of six, believed his second-born shouldn’t pursue art.

This was because Michelangelo had to take care of the social status of the family. Therefore, he should opt for other areas of study. Hence his father decided to send him to Florence to study grammar with the humanist Francesco da Urbino. But the young Buonarroti already had a strong will. He was very clear about his path to follow, the one already contained in his hands, so eager to create.

In addition, he took advantage of that Florentine period in his life to make contact with the entire artistic community of the city. It wasn’t long before he enrolled as an apprentice in a workshop that belonged to the Medici. Later, he surprised Lorenzo the Magnificent (whom historians refer to as the father of the Renaissance) after completing his first artistic works. The master Michelangelo Buonarroti was born. That first work gave him, among other things, the ability to take care of his family after his father went bankrupt.

The oversized sculptures of a strong-willed sculptor

It was at the Medici academy that Michelangelo Buonarroti came into contact with Plato’s theories. These served as a guide and shaped his works, both literary and visual. His life changed with the death of Lorenzo de Médici in 1492. He temporarily left the court and began to carry out various works in Bologna and Rome where he displayed his great artistic imprint.

He sculpted a polychrome wooden crucifix for the priory of the Florentine church of Santo Spirito. In 1493, he bought a huge block of marble and sculpted a gigantic statue of Hercules. It was the largest one in those days. At the age of 21, he went to Rome to carry out a commission by Cardinal Raffaele Riario. He wanted another large scale statue but paired with the god Bacchus.

In 1505, Pope Julius II commissioned a work of epic dimensions to Buonarroti. It was a funerary monument that required 40 figures. However, at one point the pontiff decided the restoration of Bramante’s work at St. Peter’s Basilica was more important. Thus, Michelangelo, quite upset by it, left Rome and, thus, didn’t complete his work. At least for a while.

The pope nearly excommunicated him for his refusal to return. However, he finally gave in, thus giving rise to the legends around his character, especially about his pride. At the same time, a relationship as complex as productive began with Pope Julius II himself. From that union emerged works as relevant as the Descent from Mount Sinai and the Sistine Chapel itself. However, Michelangelo demanded complete freedom of creation from the pontiff. The latter conceded.

The loves of Michelangelo Buonarroti

Michelangelo Buonarroti had a special fascination with the human body. His large scale works always attained the beauty and vigor that inspired many of the young people with whom he related daily in his workshop. Thus, names such as Cecchino Dei Bracci or Tommas Cavalieri, his disciples, were part of the artist’s emotional life.

Likewise, there’s also a record of his relationship with a wealthy lady: Vittoria Colonna. They both had a passion for poetry, religion, and Dante’s work. In fact, the widow was the perfect ideal of the Beatrice of the Divine Comedy for Michelangelo. She inspired him in life and also in death, as she died early leaving a dash of sadness in his life.

When Michelangelo Buonarroti started Rondanini Pietà in 1556, he was over eighty years old. He couldn’t finish it though. His health was failing him and he felt lonely and besieged by officials. Bothered, above all, by the changes that were taking place in the artistic world. For instance, The Council of Trent had banned the appearance of nudes in religious art. It was an afront to Buonarroti.

In fact, Pope Pius IV hired Daniele da Volterra, to hide the “nudity” of a lot of his works. Michelangelo was exhausted, frustrated, and tremendously hurt with the environment that surrounded him. Pietà Rondanini is a clear reflection of the Renaissance artist’s state of mind.

In this work, one can appreciate two ghostly figures with hardly any features. They have elongated faces that nearly seem like a silent cry wrapped in grief. It was the premonitory goodbye of an artist who had brought marble to life, chiseled out his sculptures, and had brought splendor to the Church through his oversized art. The same ones that someone dared to alter and desecrate.

Michelangelo died in 1564 and was buried in Florence surrounded by his friends. His name was part of the splendid Renaissance that was already in decline, evolving towards mannerism. He was the artist of emphasis, passion, and extreme emotion. No doubt his legacy is strong and continues to amaze people.