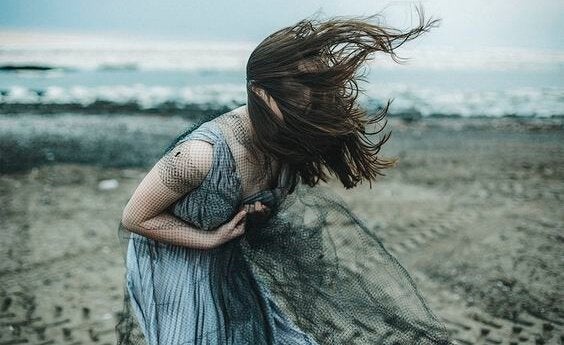 Self-destructive or self-harming behavior seems completely illogical and typical of madness. However, it’s a negative impulse that we all carry within ourselves to a greater or lesser extent. It comes to light in self-destructive people.

Sigmund Freud found that we all have an impulse toward life and everything constructive, calling it a “life drive.” But we also have a counterpoint that inclines us toward death and destruction, which he called the “death drive.”

“When you get caught up in the destruction, you must open a door to creation.”

This is one of the reasons why there have been wars throughout history and in all cultures. It’s also the reason why many people develop self-destructive behaviors. However, these behaviors are permanent personality traits only in some cases.

Usually, this occurs when there’s a lot of bottled up anger. In reality, these aggressive impulses are directed toward another, but for some reason, it’s impossible to express them. Sometimes, this is because they’re oriented toward a loved one or because the individual fears giving them a voice.

In those cases, the person turns the aggression onto themselves. It’s then when they learn to behave as their worst enemy and start building self-destructive personalities. These are ten traits that best identify them.

Self-destructive ideas include all thoughts intended to devalue someone, prevent their advancement, or belittle their achievements. In the mind of a self-destructive person, these thoughts arise almost automatically.

Then comes the context for the “self-fulfilling prophecy”: you won’t be able to, you can’t, you won’t achieve it. In this regard, these thoughts are so strong that, in effect, they end up creating that reality. There’s also an approach in which the individual always emphasizes what was missing, what wasn’t perfect, or what he doesn’t have. All this is powerful fuel for self-destruction.

In this case, passivity has to do with ceasing to act in the face of a situation or circumstance that causes individual harm. The person recognizes that something negative is happening, but doesn’t do anything to stop it or control its effect. This happens when, for example, we don’t defend ourselves against abuse or aggression.

Forced incompetence is an inclination to highlight a lack of skills. Before trying to do something, the individual inflates all his personal limitations that make it difficult to achieve something. They don’t make an effort to overcome them.

The way we feed ourselves says a lot about how we think and feel about ourselves. Not eating is how many people hurt themselves. They don’t give their bodies the nutrients they need to stay healthy.

The same happens on the opposite end of the spectrum. Eating too much produces different health problems, both short-term and long-term. Sometimes an insatiable appetite appears. However, there’s no satisfaction, no matter how much they eat. Instead, there’s sadness, guilt, and a desire to eat more.

4. Harming others and self-pity

Self-destructive people often develop hostile or harmful attitudes toward others. They create unnecessary conflicts or are inconsiderate, rude, envious, gossipy, etc. They see others, fundamentally, as a source of confrontation. Other people frustrate them.

Usually, after these conflicts, they fall into deep episodes of self-pity. They attack, but when the other person responds, the self-harming individual behaves like the victim of an unjust act. They insult, but feel sorry for themselves when they’re insult. And they don’t admit that the fruit of their harvest is a fruit that they sowed.

Self-harm is sometimes evident and sometimes not so much. Some people deliberately injure themselves: they cut themselves or pull out their hair. They also expose themselves to risky situations which cause relatively frequent accidents. Other times, they do this in a less obvious way, such as getting painful tattoos or piercings on sensitive body parts.

There is also self-injury when they abuse substances that damage the body. The most obvious case is that of excessive drug use, such as alcohol. Addictions are highly self-destructive and, in their extreme degree, always lead to death if there’s no intervention.

Social suicide occurs when they cut emotional bonds with others. It’s usually a gradual process. First, there’s a reluctance to be with others, and, little by little, this translates into a progressive isolation.

Self-destructive people not only isolate themselves but develop a series of behaviors that are irritating to others. Sometimes they’re excessively demanding or show contempt for others. They’re subsequently treated negatively by others. They feel that their rejection of others is justified.

7. Hiding their emotions and refusing help

It’s very difficult for self-destructive people to be honest with themselves. They fail to recognize their feelings and emotions. Instead, they unconsciously try to keep them hidden. They have all kinds of rationalizations to justify their behavior and refuse to admit that they have a problem.

Hence, it’s also very difficult to help them. If someone suggests that they visit a psychologist, they will see it as a sign of aggression and contempt. They may react aggressively if they receive advice or someone insinuates that they should change their behavior. These people don’t want to be well, and they’ll keep on acting the same way.

Self-destructive people often forget about their own bodies. They don’t do any physical exercise nor give any importance to doing it. Also, they have a negative opinion about their body and, of course, physical pleasure like sexuality. They don’t put effort into their personal appearance. The lack of body care is a manifestation of how little they appreciate themselves.

Also, they don’t put any effort into solving problems that are in their mind. If they have insomnia, they accept it and are reluctant to take action to solve it. If they experience emotional discomfort, they choose to victimize themselves but don’t do anything to change it.

Life demands sacrifices in many circumstances. However, these are worthwhile when they’re oriented toward a higher achievement or when they’re a necessary step to achieve greater well-being. If they simply become a constant condition that leads to bad situations, they correspond to a self-destructive behavior.

Some people assume that these continued self-sacrifices are a test of nobility, good character, or altruism. What’s in the background is an act of self-sabotage. What conceals this type of behavior is giving up on their desires, dreams, and achievements. They maintain painful or unrewarding situations only to reduce the chances of being well.

Deep down, self-destructive people don’t feel worthy of love. In fact, they don’t have a lot of self-esteem. That is why, in some way, they don’t tolerate a relationship in which everything goes well. Oddly enough, if they feel loved or appreciated, they will do everything in their power to put an end to that. They feel better being the victim than being fortunate. They prefer to elude luck in order to complain about it.

In addition, they’re likely to become capricious or demanding. Through any means necessary, they try to persuade the other person that it’s not worth having a relationship with them, or that the affection they experience has no foundation. Sabotaging positive relationships is a way to stay in a self-destructive position.

This type of behavior speaks of undigested experiences and difficulties in structuring a self-image. Self-destructive people are, above all, victims of themselves. They’re caught in the mandate imposed by a person or a circumstance against which they couldn’t defend themselves. This identity comes from traumatic circumstances. It’s as if the person is trapped inside a mirror that reflects a distorted image.

It’s true that those who have these traits have difficulty with their self-esteem. But beyond that, there0s a difficulty in self-perception. Seeing yourself in a more constructive way involves challenging an authority figure or a given mandate. What lies behind that position is unconscious fear, for example, of being happier than one’s mother or father. Or to prove that, for example, a religious “truth” is not so true. Whatever the case may be, it demands professional treatment.

7 Signs That You’re a Self-Destructive Person
We all have a self-destructive side to us. But some people make this side the core of their personality. Learn to recognise the 7 signs... Read more »
Link copied!
Interesting Articles
Psychology
7 Phrases for Self-Improvement

Psychology
Have You Heard of "Death Cafes?" It's an Interesting Idea...

Death has been a taboo subject in many societies and over many time periods. We don't have to look far,…

Is it possible to change and stay the same? How many times has someone told us to "never change"? In that…

Psychology
8 Common Psychological Biases: With Which Do You Identify?

Why are people so superstitious? Why do people sometimes ignore concrete evidence and get caught up in the impossible? How is…