Look Around: You Aren't the Center of the Universe 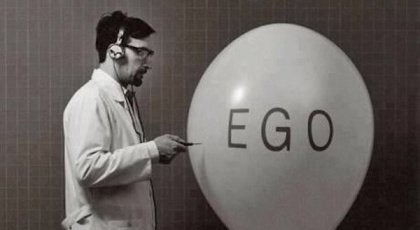 We all know people who think they’re the only inhabitants of the world. No matter what happens, these people always feel like they’ve had it worse than you. They think they’ve suffered more, and their life is harder. We would all like to tell them to look around and realize that they’re not the center of the universe.

The egoists around us

These people lack emotional balance. They live off of the energy of others and use pity and guilt as weapons of seduction. Naturally, they don’t have a single face. Instead, they disguise themselves in whatever suits them better in their own little universe.

They’re the children who constantly cry for attention by trampling on other’s feelings. They’re the people who use emotional extremes to exaggerate their pain and who invent stories to trick you.

These stories are usually exaggerations of some reality they may have experienced. However, after replaying it in their own universe so many times, any resemblance to the original event is a mere coincidence. Thus, they try to conquer and provoke you with these stories.

Egoism and the art of selfishness

Egoism, or the art of selfishness, involves spending your life thinking only of yourself. Yes, the ego is characterized by the “me too” and “mine is worse” attitude. It includes thoughts and exclamations like, “I know that all of the worst things happen to me!” and “I’ve got the worst luck in the world.”

These people complain that they’re not heard and that no one understands them. However, they’re the first ones who stop listening when others complain about their own sorrows. Many times, this behavior is unconscious, because it’s the only way they don’t feel so alone.

In these cases, these are people with low self-esteem who don’t know how to correctly communicate their feelings. In addition, they often lack the social skills to allow them to communicate better and, above all, to understand each other and put themselves in their place.

In other cases, this egoism is done deliberately. If so, they demonstrate their complete lack of empathy. They’re selfish and harmful people. Then, this selfishness leads them to become emotional manipulators.

These constantly selfish emotional manipulators try to benefit from others’ feelings of empathy. They tend to have the following traits:

How to deal with (not face) these people

It’s very difficult to deal with this type of person and avoid blackmail and confrontation. A quiet coexistence with these emotional manipulators is complicated. After all, they suck the energy from all of your resources as they make you feel guilty.

The first thing you need to know is that the usefulness of their complaints or stories lies in getting what they want. At first, the complaint may come from a legitimate motive, such as a loss or a very negative experience.

At that moment, they complained and found support from those around them. They proved that they were a (suffering) victim, and was probably given more attention because of this. This attention made up for their own emotional shortcomings. Thus, complaining and being selfish became their way of relating.

Therefore, this is a skill that can be learned much like any other skill. However, it first requires the egoist to recognize what he/she is doing to attract others’ attention.

What you can do, as an acquaintance and sufferer, is to help them become aware of their problem. That way, they can ask for help if they want. To do this, using communication strategies such as the sandwich technique can help.

The sandwich technique is a way to help criticism be well-received. It begins by pointing out a positive quality of the person. Then, you mention what you think he/she could improve. Finally, you end with a few positive words for them.

In this case, it could be something like: “I understand that what’s happening to you is tough even though you’re a strong person. However, I was talking about what worries me and I would like you to listen to me just like I always listen to you. After all, that usually helps me a lot.”

This way, you can express your discomfort while not allowing this “emotional vampire” suck you into his/her cycle of selfishness. After all, even if we want to tell these people to look around and get out of their own universes, it’s not the most appropriate way to address people. If we want to receive good treatment, we must give it first, no matter who the recipient is.

Link copied!
Interesting Articles
Psychology
How To Escape the Cage Built by an Emotional Predator