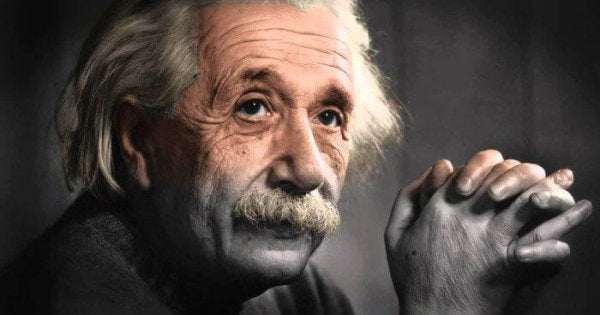 We all know Albert Einstein, the best-known scientist of the twentieth century. His great contribution was the theory of relativity, however, despite being a scientist, he also left us quotes that we can take advantage of for our personal growth. For that reason, today we have compiled some quotes by Albert Einstein that can serve as inspiration and reflection.

In the end, he became a recognized scientist, but they say that Albert Einstein – perhaps true or perhaps a way of creating a legend – was not considered by his teachers as an especially intelligent student as a child. It was difficult for him to express himself, to relate to others and it took him a long time to speak (he did not do so until he was 3 years old). In adolescence, his problems worsened.

The truth is that Albert Einstein did not fit in into his high school. They say that a professor, Dr. Joseph Degenhart, told him that he was never going to get anywhere in life. However, despite this, Einstein managed to stay motivated and give shape to the theory of relativity. The same one that many tried to discredit.

The following are some of the quotes by Albert Einstein, his own conclusions that helped him in his personal growth.

“Everybody is a genius. But if you judge a fish by its ability to climb a tree, it will live its whole life believing that it is stupid”.
-Albert Einstein-

This is one of the quotes by Albert Einstein that can make us rethink our attitude towards life. Do we consider ourselves victims of everything that happens to us? Do we believe that we have no capacity to influence what happens to us? Sometimes when we perceive something as negative, it distresses us in such a way that we are unable to identify any opportunities that it contains.

Our current society pollutes our eyes with a filter. Of scarcity, instead of abundance. For that reason, we believe that we need to acquire or buy goods or services that give us what we think we lack. For many it is as if never, not for an instant, nothing was enough. They would feel poor, lacking. A sensation that in some way or another, we have all harbored at some point.

Adopt a new perspective. Accept those that other people have about life. Instead of denying them, rejecting them, let’s try to see situations from multiple perspectives… until we become aware that the way we look at things can make the difference between an opportunity that is won or lost.

This second quote by Albert Einstein refers to something that many do when our consciousness is sleeping: live on autopilot. The vast majority of our beliefs are learned or inherited, our habits and our mental and behavioral patterns are what direct our life. That is how we remain blind.

It’s hard to get out of that automatic mode. However, there are many activities, such as meditation or mindfulness, that invite us to be more present, to move away from that mechanical way of living that makes us behave like robots. It is enriching to be able to connect with our interior.

“I must be willing to give up what I am in order to become what I will be”.
-Albert Einstein-

The danger of doing nothing

“The definition of insanity is doing the same thing over and over again, but expecting different results”.

What is the use of always stumbling over the same stone? We tend to expect things to change without modifying our habits or our attitudes, without maturing… It is as if we think that a superior force is responsible for what does not happen. Maybe it’s just good or bad luck, maybe someone else is responsible.

Many times people settle into complaining and victimhood, saying things like “I don’t like my job, but I can’t get another” or “I know my boyfriend is going to change, I’ll make it happen”. This, as Albert Einstein says, is crazy!

To start seeing different results we have to make changes in ourselves. Move, get out of our comfort zone, act, do everything but stay in the same place. If you repeat the same pattern over and over again, you probably won’t get different results.

Failure is to stop trying

“You never fail until you stop trying.”.

This fourth quote by Albert Einstein allows us to reflect on what we have taken for granted for so long. Failures are no reason to throw in the towel, because you can learn a lot from them. Failures are lessons, and seeing them this way allows us to move forward.

Many think that failure is a signal that we should surrender, to think that “this is not for us”. If Albert Einstein had believed this, today we would not have his legacy or that of many other people who have made great contributions to progress. Yes, real failure only occurs when we do not try or when we undervalue the journey and only focus on the goal.

The power to change your thinking

“The world as we have created it is a process of our thinking. It cannot be changed without changing our thinking”.

Although it is hard to believe, the reality we see and the way in which we perceive it is quite influenced by our previous experiences and by filters – such as optimism or pessimism – that we have been putting, with experience, into our eyes. Therefore, it is of little use to complain about how circumstances treat us, since we are the ones who can change our way of thinking and seeing them.

Knowing this, Albert Einstein allows us to reflect on all those attitudes that make us feel like we at the mercy of circumstances as if we had no control over them. When, in reality, all change is born inside us. We have a great power that we do not take advantage of.

If you are in a process of personal growth, going through a crisis, or if you feel that it is very difficult for you to move forward, these quotes by Albert Einstein can help you take the first step. Reflecting on each of them will help you to open your mind, to question everything you have learned and put them into practice. They will allow you to experience life in a much more enriching way.

How to Solve a Problem According to Einstein
Read more »
Link copied!
Interesting Articles
Culture
AIDS Doesn't Have a Cure, but Discrimination Does

Dogs are our best friends, and for good reason! No matter what kind of day you've had or how tough…

Egyptian culture has been one of the most admired and mythologized cultures in history. We're talking about probably the most…