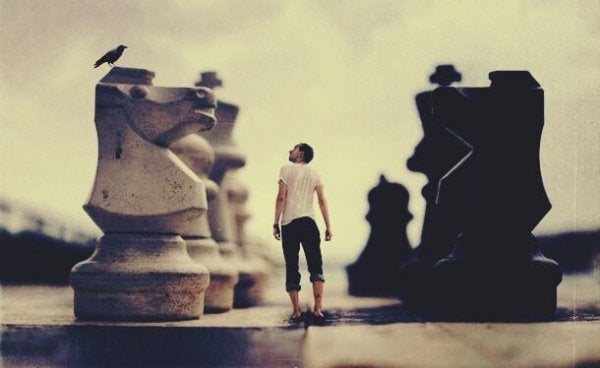 A whole lifetime isn’t enough to fully know yourself, let alone other people. Sometimes people surprise you with their behavior, even if you’ve known them for years. That’s why it is important to pay attention to certain unique personality-revealing situations that can shed some light on who people really are.

No one completely bares themselves to others. That is fairly obvious. You get to know people by spending time with them in whatever circumstances you share. And some circumstances are particularly revealing of a person’s personality.

“Man uses hipocracy to fool himself, perhaps even more than he uses it to fool others.” [translation]

They’re normal, everyday situations, but they involve a dilemma. They challenge what the person believes themselves to be, giving you a peek beneath their appearances. Do you want to know what situations reveal a person’s true colors? Take note of the following five…

With petty problems, almost all of us are able to show our mature, diplomatic side. It might be a little bit difficult, but as long as the issue doesn’t hit any nerves or call into question our image or well-being, we can be civilized.

Something different happens when we’re in a truly serious conflict. We’re talking about something that is an objective, real threat. Not many of us pass the test in this case. Some people get paralyzed; others just explode. That’s why they say that serious disagreements uncover significant things about someone’s personality.

Games might not seem to be particularly relevant to real life. And they might not be, but only on principle. The truth is that almost all human beings are what they are in large part because of games. Games teach us to follow or not follow the rules. They teach us to take a position.

If you want to know more about someone, invite them to play a competitive game. You’ll see what they are capable of doing in order to win. Or you’ll see how they behave when they lose. You’ll also be able to observe how they approach competition and the feelings and emotions that it brings out.

People’s true dispositions shine through in illness, whether their own or someone else’s. This is one of the most vulnerable human states. As such, it tells us a lot about the quality of a person and their capacity for empathy.

There are those who are frightened by illness and stay as far away as possible. Some use indifference as a self-defense strategy. Others act intolerant and are incapable of connecting with someone who is suffering. All of this says a lot about a person’s personality.

4. Putting together a piece of furniture

This is another activity that might seem trivial or unimportant. At the end of the day, however, it is one of the most poignant in our list personality-revealing situations. To put together a piece of furniture you need patience, organization, persistence, ingenuity, and tolerance. This is especially true if you are putting it together with someone else.

When someone has money problems, their true colors come out. Running out of money is, above all, a test of self-confidence and character. People who believe in themselves and their abilities won’t be terribly upset by money problems. That doesn’t mean they won’t worry about it, just that they won’t lose their heads.

On the other hand, some people directly associate their feelings of worth and competence with their material possessions. If they lose their possessions, they don’t know what to do and start to fumble around blindly. They reveal themselves to be unsure, afraid, and timid.

All of the above personality-revealing situations are such because they’re like tests. In each one of them, there are certain factors that strip away a person’s facade and shows who they really are. So if you really want to know someone, there’s no better way than to observe them in these kinds of circumstances. Then you will see their true personality.

3 Personality Types That Make You Unique
Your personality reveals who you really are. It encompasses your physical traits as well as your mental ones, which make you different from everyone else. Read more »
Link copied!
Interesting Articles
Psychology
Choosing the Right Punishment Is Not Easy

Psychology
Inside Every Happy Person Is a Fighter

Inside every happy woman, there's a fighter. Inside every man who smiles at life, there is a constant fight against life's…

We kiss in different ways: furtively, lustfully, tenderly, timidly, avidly and some lucky souls even copiously. We do it when the sun heats up the asphalt. Also, when the stars…

Psychology
The Art of Living in the Present Moment

Living in the present seems obvious, and though it should be, it's actually the exception. Why? Because truly being present is…