Have you ever thought of the complexities of justice? 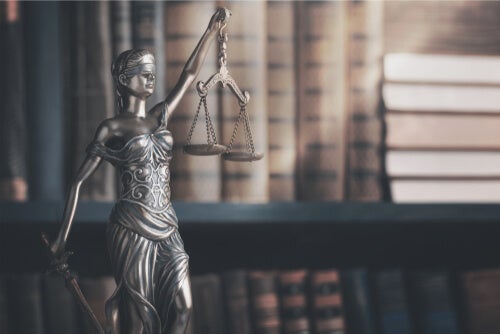 Some phrases about justice are particularly illustrative. They show us that justice is a complex and, at the same time, decisive concept. Certainly, a just society is also more developed.

Particular phrases about justice can help us elucidate the meaning of this complex concept. What0s fair or not can have many interpretations and be sensitive to many circumstances, depending on the perspective adopted.

Throughout history, different religions, philosophies, and legal codes have defined and propagandized ideas about what’s just and what isn’t. The common purpose, however, as seen in various phrases about justice, is to define behavior that results in greater harmony in society.

It was in the Roman Empire that people began to address this topic in depth. One of the first jurists in history was Ulpian. One of his phrases says: “Justice is the constant and perpetual will to grant to each one his right”.

He adds that to be just is “To live honestly, to do no harm to anyone, and to give to each their due”. This generalization is quite valid. However, there are other phrases about justice that allow us to broaden the concept. Here are some of them.

1. Justice and the law

This is one of the phrases that Montesquieu wrote. It says, “Something isn’t fair because of the law. It should be the law because it’s fair”.  It’s actually an affirmation that’s a problem in itself, but also very true.

The law doesn’t always correlate with justice and this has been one of the great conundrums for society. It poses the dilemma of acting justly or complying with the law. Therefore, we have the importance of promoting and supporting just laws and, at the same time, denouncing and fighting for the repeal of unjust ones.

2. One of the phrases about Seneca

There were many Roman thinkers who reflected on justice. One of them was Seneca, who was exceptional and way ahead of his time. One of the phrases about justice says, “Nothing resembles justice as much as delayed justice”.

What he says is fundamental as, for something to be fair, it mustn’t only grant each person their rights but also do so in a timely manner. And this applies not only to the legal or social sphere but also to interpersonal relationships and their vicissitudes.

3. Justice and the judge

Francisco de Quevedo has one of the most forceful phrases about justice. He says, “Criminals do less harm than a bad judge”. He’s absolutely right, as a bad judge can have enough influence to pervert society as a whole.

If you can’t trust judges to do justice, injustice becomes law. At the same time, this also applies to everyday life. Sometimes, people judge others so wrongly and unjustly that the mistake they may have made ends up being less harmful than the one that justice commits by imposing a certain penalty on them.

4. The good and the just

Victor Hugo gave us a very profound phrase, which is valid in the most varied circumstances. He said, “Being good is easy, what is difficult is being just”. This means that we often confuse goodness with justice, when in fact they aren’t synonyms.

Unfortunately, there are times when kindness leads to impunity. A fault is forgiven or overlooked in the name of mercy. However, this can become an inappropriate precedent, leading not to justice but to blurring the boundary between what society allows and what’s forbidden.

Interestingly, the following phrase was spoken by a combat man, a World War II hero and a great military man: Dwight D. Eisenhower. It’s a statement that expresses a truth that should never be forgotten: “Peace and justice are two sides of the same coin”.

The main function of justice is to maintain peace and concord among human beings. For this purpose, all legal codes and moral norms have been made. The final purpose is to guarantee a good coexistence among human beings. Therefore, where there’s justice, there’s peace, just as where injustice reigns, conflict also flourishes.

Honesty and maturity are needed to define what’s fair or not in each situation; something that also demands generosity and honesty. Let’s think that, to a certain extent, we all act as judges, both of ourselves and of others. Thus, perhaps these phrases will be a guide for us to better understand this concept, resulting in greater success when it comes to putting it into practice.

Julius Caesar: Young But Bold
Julius Caesar is one of the most famous figures in history. This article concerns his early years, about which not too much is known. Read more »
Link copied!
Interesting Articles
Literature and Psychology
7 Great Quotes from Seneca

Pleasure, the immediate reward, is the devil's invention, a universal invention. The center of the biological universe consists of enjoyment, reward,…

Culture
The Reflection of Our Lives on Social Media

When we see all of our contacts' status updates and photos on social media, we may feel like our life…

Culture
The Sweet Story of Koko, the Smartest Gorilla in the World

Not everyone knows the story of Koko, the smartest gorilla in the world. This beautiful animal was born in a…