Living Apart Together - A Good Solution?

Living apart together (LAT) couples are those who have a relationship but maintain their independence. Is it possible to maintain such a relationship? What's the point of it? Continue reading to find out more about it. 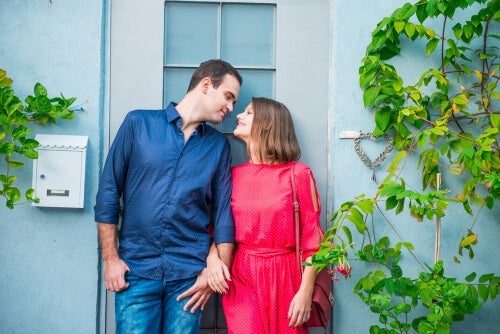 Even though a Dutch journalist used the term “living apart together” (LAT) for the first time in 1978, it wasn’t until 2000 when American academics and journalists appropriated it. They used it to refer to couples who have an intimate relationship but live separately. All while sporadically spending a lot of time at each other’s places — be it over the weekends or holidays.

Currently, models of interpersonal and family relationships are transforming. However, it’s likely that these types of couple models have been around for a while but were somewhat invisible throughout history. By contrast, current relationship models that don’t align with the traditional family structure are coming to light.

This series of changes, and specifically the couples living apart together, is one of the themes that are under scrutiny in family sociology. Some authors consider that these couples are traditional models who don’t need to live together for the typical reasons, such as difficult access to housing, the labor market, degree of commitment, etc.

Similarly, others consider it a new model of relationship based on emotional, individual, and intimate freedom. For these, being a LAT couple is a personal decision. In these couples, the commitment to each other remains despite not sharing a home. While coexistence, in traditional couples, would eventually go hand in hand with their commitment.

In what context does this kind of relationship arise?

Researchers are interested in finding individual, demographic, or cultural characteristics. The kind that allows humans to better understand this type of relationship.

However, you must contextualize it in a society that’s undergoing changes that affect relationship models such as:

Also, other new models are currently emerging due to ideological changes such as open relationships, polyamory, hybrids, swingers, etc.

This is an age when even new technologies are redefining how people relate. Thus, how a relationship begins and the importance of distance. In this sense, it’s evident that the concept of love and life as a couple is now more subjective than ever.

Why opt for living apart together?

This type of relationship happens in all age ranges. However, the reasons for maintaining it seem to differ according to age.

The profile is usually that of students who still live with their parents, among 18-24-year-olds. Thus, the reasons for young people to maintain this type of relationship are often beyond their control. It depends on variables such as parental dependency, caregiving responsibilities, studies, etc. In fact, they often indicate that they would live with their partner if their conditions allowed them to. Thus, in this age group, the main reason is they’re in a transitional stage towards greater commitment and subsequent coexistence.

For adults over 30, LAT couples are a way to share intimacy while enjoying their own autonomy. Therefore, the intention to take a relationship to a more traditional point (wedding or cohabitation) decreases over the years. Furthermore, the duration of relationships is significantly longer than those of young people.

Can such a relationship last?

A few studies made it a point to observe these relationships over time. In addition, they also studied their members’ intentions for the future.

Some research indicates that between 20-30% of LAT couples remain or intend to continue like this in the future. Apparently, this intention is linked to age, with young people between 25 and 29 years of age being the most likely to end up living together and getting married. In contrast, most of those over 60 years of age want to live separately.

In general, regardless of age, social pressure plays an important role in intentions about continuing to be LAT or not. That is, their family and friends think they should live together and often ask questions or make comments about it. It makes the partners of a relationship consider where to take it in the future.

Is living apart together a good solution?

In summary, LAT couples decide to maintain this type of relationship for two main reasons: either due to a lack of resources or by making a voluntary choice based on autonomy. It could also be that it was a choice to try to solve some problems or difficulties that may have arose while they lived together. For example, the distribution of tasks or children from previous relationships.

It’s common that the main advantage is the preservation of one’s autonomy and privacy, as well as preventing possible losses (economic, other relationships, materials, etc). This, clearly, will be determined by the attitude or ideas maintained towards romantic relationships.

Likewise, it can also pose a series of disadvantages, especially to those who have an ambivalent attitude towards LAT relationships. In that case, the flexibility of these relationships can generate dissatisfaction or feelings of insecurity because the other person doesn’t want to live with their partner. Or it may be that, in general, living together provides more opportunities for intimacy and for instrumental and emotional support.

In short, whether this is a solution to satisfy your own needs or not depends solely on your own personal values ​​and preferences and the reasons that led you to make this decision.

Long-Distance Relationships Are More and More Common
Long-distance relationships aren't for everyone. Some people would find it impossible to have their significant other hundreds of miles away. Read more »
Link copied!
Interesting Articles
Romantic Relationships
Romantic Passion and Creativity Are Related

Today, we'd like to talk about romantic passion and creativity. Although they may not seem to be related, recent studies…