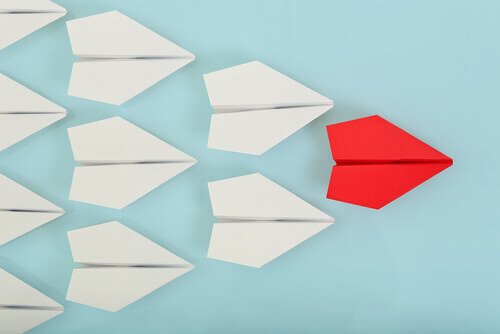 What does it mean to be a leader? One of the questions social psychology wants an answer to is why people follow them. In the classic study of leadership, people look for characteristics that leaders have in common.

But there’s too much variety among leaders for that approach to give us one single definition. A perspective less focused on individuals and more focused on group processes might be the key to understanding leadership better.

John Adair once said that the most important word to a leader is “we,” and that the least important is “I.” That observation is talking about leadership from a perspective of social identity. A person takes leadership of a “we,” all with the same goal. That’s why a leader’s followers forget about their own interests and do things for the sake of the group.

Before we go into how leaders are born through group processes and social identity, we’re going to do a quick review of the classic theories in the study of leadership. That way you’ll have a broader idea of everything that’s part of the leadership process.

Classic perspectives focus on the idea of the “Great Man” and his personality. This idea goes back at least to Plato, and its goal is to figure out the essence of what makes a leader. Debates about a leader’s personality and characteristics have been going on for around 2,500 years.

Generally, it says that a leader is someone who has a clear ability to direct, manage, and motivate other people. There’s usually also one specific, fundamental characteristic associated with it. That characteristic is “charisma.”

But what exactly is charisma? It’s had a lot of very different definitions over the years, and even some circular ones, like how charisma makes a leader and being a leader means being charismatic.

The big problem with  these theories is how completely different all our examples of leaders are. People have done a lot of studies analyzing similarities between leaders. They look for the characteristics that would make someone a leader or not. But their results never give any clear answers.

The best factor for predicting leadership according to this is intelligence, which represents 5% of the variety. That means that there would be 95% percent variety caused by factors we still aren’t sure of. That’s why personal identity isn’t a very good tool for predicting leadership. But we can see what exactly is happening if we look at a leader’s group or social identity.

Before we start, if you aren’t very familiar with the terms self-categorization and social identity, you can follow this link. Knowing about those theories will help you reach a deeper understanding of what we’re going to explain now.

One fundamental aspect that makes someone a leader is that their followers see them as one. It doesn’t matter whether that’s implicit or explicit. In other words, behind every leader there’s always a group, which has its own identity. That identity will be reflected through characteristics and goals that define it. The individuals in it will also identify with most of those characteristics and goals.

What makes a leader according to social identity?

So if followers are the ones who choose the leader, what exactly do they look for? It’s easy to imagine that if the followers are aware of their social identity, they’ll look for someone who represents the group’s characteristics and goals.

While they’re looking they’ll compare the candidates for leader alongside the group’s identity. That’s when someone will stand out as the perfect prototype for the group, and then the crowd of followers will see them as their head.

A leader is someone who has no personal identity from their followers’ point of view. Their whole existence represents the group, and that makes them the ideal person to play this role. That makes sense, because if they’re equal to the group, they can’t go against its interests. Plus, since all the members share a group identity, they’ll strongly identify and empathize with the leader.

This new perspective definitely overcomes the flaws in the classic leadership models. Explaining leaders through the identity of each specific group can help us understand the huge differences between them. But there’s still a lot left to research, and a lot of processes left to understand when it comes to how leadership works.

5 Lessons in Leadership from Game of Thrones
Leadership is something that we all have to put into practice at some point in our lives. It's just as important for bosses and business people as it is for teachers or parents who have to educate their children. Read more »
Link copied!
Interesting Articles
Social Psychology
The Spotlight Effect: Why it Seems that Everyone Is Looking at You