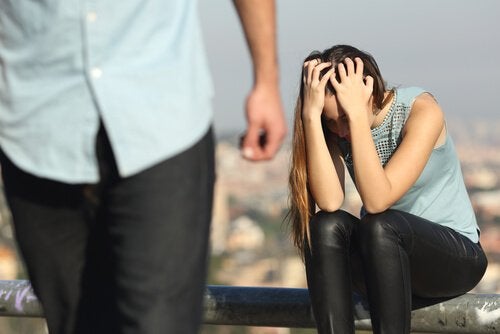 In 2002, Lundy Bancroft wrote one of the most profound books ever written about the mentality of psychological and emotional abusers.  His work was backed by clinical evidence and research. In the book, he defines different types of emotionally violent people.

Lundy Bancroft’s theory is a detailed breakdown of what is behind each type of emotionally violent or aggressive behavior. Bancroft lays out the specifics of behavior when aggressors are mistreating their victims, presenting the information about what he believes to be the basis for abusive behavior as if it were the internal dialogue of the different types of emotionally violent people.

Editorial note: we are using gender pronouns as a convenience; we recognize that abusers and victims are both female and male.

The emotional abuser believes that his partner is there to please him. Her role is to take care of his needs. However, she isn’t allowed to demand anything of him. She should simply be content and pleased with whatever he offers. He feels like he’s above reproach because he considers himself lovable and generous.

The majority of his conversations revolve around his needs and her obligations. However, he gets furious if she demands anything of him, even if it is his responsibility. If he feels unhappy, he blames her. He may seem less controlling than other emotionally violent types if his needs are met.

He believes himself to be an admirable person. He is proud of his abilities, intelligence, and achievements. Mr. Perfect always knows exactly what to do, including what’s best for his partner. As such, he doesn’t need to listen to or consider her opinion. This is especially true when her opinion differs from his own.

When he talks about her, he does it in a condescending way. If she doesn’t feel like he is her superior, he will ridicule her, insult her, and discredit her thoughts. That makes her more vulnerable to being controlled. You might say that he specializes in her weaknesses and has no problem talking about them in front of other people.

An expert in driving her crazy

This type of aggressor is convinced that his partner is the one who causes all of their relationship problems. He acts based on those beliefs. These types of emotionally abusive people are capable of abuse without even changing their tone of voice. He is sarcastic and belittling, saying things like, “You’re crazy. You’re making a huge deal out of nothing.” He uses his supposedly calm demeanor to justify any type of cruelty.

His tactics may be difficult to identify. They often go unnoticed to a casual observer. They are also easy to deny in an argument with his partner. He might even make his children think that their mother blows up for no reason. But these are calculated, flawless maneuvers.

This type of person needs to control all of his partner’s movements. He believes he knows exactly how she should do things. He believes that she doesn’t deserve to have anyone or anything in her life besides him.

The drill sergeant watches her and limits her so that she can’t be independent or develop any resources of her own. He takes control to the extreme. He is also extremely jealous. His jealousy leads him to accuse her of cheating. He escalates the situation by saying denigrating things about all women.

These types of emotionally abusive people end up physically abusing their partners. The effect of this abuse is similar to that of rape. It traumatizes the victims and makes it difficult for them to leave the situation.

This type of man believes that he is against sexism. As such, he doesn’t believe could ever be an abuser. The sensitive guy thinks that women should be grateful to him because he isn’t like other men. He loves talking about feelings and acts like he’s on women’s side. As a result, it’s easy for him to think that if his partner feels abused, it’s her fault.

He controls her because he knows about her childhood problems. He believes that he can analyze her mental and emotional reactions and be inside her head (whether she wants him to or not.) What’s more, nothing is more important than what he feels. He demands that she take care of him, but he doesn’t think that his partner’s feelings are important.

He is easily hurt and it’s very difficult to repair the damage. Nevertheless, if his partner claims that her feelings are hurt, he insists that she just get over it, and quickly.

Women are here on earth to sexually satisfy men, and especially him. However, he believes that women who want sex are “easy” and women who don’t are “prudes.”

He feels handsome, sexy, and irresistible. The Playboy believes that there’s no point in resisting temptation because sometimes women seduce him and there’s nothing he can do about it.

He doesn’t take his relationships seriously because he doesn’t want any restrictions on his freedom. His infidelity is chronic and he is often cruel and inconsiderate of his partner. If she finds out he is cheating and confronts him, the abuse might escalate to physical aggression.

Women never fight with him. Instead, they fight among themselves. That’s because he knows how to make them feel special. They are the jealous ones; they are the ones that can’t accept that the relationship ended. In fact, they might even think that the other women were abusive to him.

The Rambo thinks that fleeing from violence or showing fear or embarrassment is equivalent to homosexuality or femininity. For him, both gay people and women are in an inferior category. Consequently, strength and violence are superior.

He says that women exist to serve men and be protected by them. He has an exaggerated view of what it means to be a man. For example, he might believe that “it isn’t manly to hit women, except if they deserve it.” That’s because he believes women to be property, like a trophy. She is supposed to restrain herself.

This type of man is aggressive with everyone. He has very little patience for weakness, fragility, or indecision. In addition, he feels good when he intimidates others. He tends to have a criminal past (violence, intimidating behavior, theft, traffic violations…) Some of them are psychopaths or sociopaths.

The Victim feels like life has been difficult and unfair to him. Women he has been with just hurt him, along with everyone else. Consequently, he isn’t responsible for his actions. Any mistakes he makes in life are a direct or indirect consequence of mistreatment that he experienced.

He builds relationships by convincing his partner that she will be the one who finally makes him happy. If his partner questions him or accuses him of being abusive, he has a justification ready.

The Victim will accuse her of being on the side of those who were cruel to him. He thinks that women who complain about abuse are anti-men. Not only that, but he believes that men are victims of women.

This type thinks that all women are evil. He believes that the only way to get them to behave appropriately is to terrorize them. In general, he doesn’t believe that women can make independent decisions.

She has no right to leave him or challenge him. That’s because he believes that her life is his. He terrorizes her to reinforce the situation. The Terrorist makes his partner fearful so he can then “save” her. He will go to any lengths to frighten his partner. He might even involve the children.

These types of men seem like sadists. They enjoy causing pain and being cruel. It’s possible that someone abused them as children and they learned the same cognitive and emotional behavioral patterns.

The mental case, or the addict

Everything he does is a result of psychological problems or addiction. As such, if his partner talks about his abuse, she is just being mean. She is an inconsiderate person who doesn’t understand his problems.

If she challenges him, he could suffer a relapse and she would be responsible. He may seek treatment for his illness. However, a cure doesn’t mean an end to the violence. He tends to be inconsistent with the medication. The risk of violence is high because he doesn’t feel responsible for his medication.

Psychological Effects of Domestic Abuse
Abuse always leaves deep scars, and they're sometimes impossible to erase. The psychological effects of domestic abuse in particular tend to be quite deep, especially if the harm comes from someone you're in love with. Read more »
Link copied! Next
Interesting Articles
Psychology
Intelligent Discipline

Maybe you feel like you've tried everything to overcome your insomnia, but nothing works. Mild insomnia can be frustrating and…

Psychology
Your Skin Never Gets Alzheimer's: It Always Remembers Caresses and Scars

There's a general, false belief that people with Alzheimer's or other kinds of dementia usually disconnect from the outside world…

Psychology
Do Not Try to Change Me

Love me as I am, free, sometimes messy, sassy, at times chaotic, imperfect, and always brilliant. Don't ask me to be well-behaved, nor submissive, nor quiet. Do not try to change…