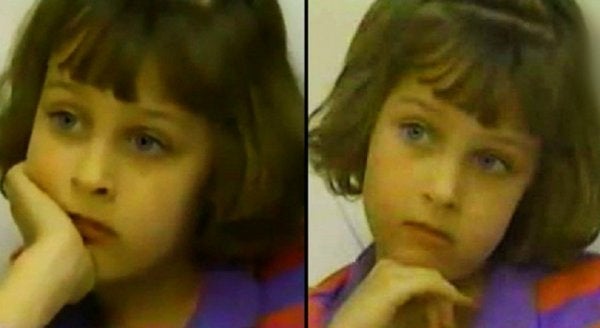 People who lived through the 80’s might remember this incredible case that reverberated around the whole world. Known as “the psychopath little girl,” young Beth Thomas terrorized her entire family. However, it started with a terrible trigger. Even today it will put your hair on end.

Everything that happens during childhood leaves a mark on the child. That’s why it’s so important to have good emotional development in this formative time. The problem is that sometimes this doesn’t happen, and problems come out later.

That’s what happened to Beth. She went through unspeakable things, eventually earning herself the nickname, “the psychopath little girl.”

DR.KEN: Are your parents afraid of you?
BETH: Yes.
DR.KEN What would you do to them?
BETH: Stab them.

(Excerpt of a conversation between Beth and the psychologist Ken Magid).

The story of the psychopath little girl

Beth Thomas lost her mother when she was only one year old. After that, she and her brother were left under the care of their biological father. That’s where the real ordeal began.

The father sexually abused the two children. Doctors found out and reported the abuse. After six months, a social worker took custody of the two children. They were later adopted by a practicing Christian couple.

The couple was very caring with Beth, as well her brother. They had been trying to conceive a child, so they saw these two youngsters as a gift. But then Beth started having nightmares about “a man who fell on top of her and hurt her with a part of him.”

The nightmares worried her adoptive parents, but what really worried them was what Beth started to do. She started being very violent with them, as well as with her brother. She even killed pets.

It was as if she were filled with an uncontrollable rage. She also compulsively masturbated in public, even making herself bleed.

The parents right away decided to take Beth to a clinical psychologist specializing in children who have been victims of sexual abuse, Dr. Ken Magid. The things he discovered about what childhood sexual abuse did to Beth Thomas were very illuminating.

Here is a video showing the parents’ perspective. It also shows some of the conversations the psychologist had with Beth that further illustrate what was occurring.

Beth was able to recover

Dr. Ken Magid decided that for Beth’s own good, it was best to hospitalize her. She was diagnosed with an attachment disorder that kept her from having healthy relationships with other people.

Likewise, rules were set so she wouldn’t be able to harm the other children in the medical center. As she got better, the rules loosened up.

Despite all of this, one question remains. Was Beth Thomas truly a little psychopath or was she a sociopath? Because psychopathy is an innate antisocial tendency. It’s a biological condition in which certain areas in the brain don’t activate. Areas associated with emotions, impulses and decision-making.

But with sociopathy, the environment plays an important role. In Beth’s case, everything was a consequence of her negligent upbringing. The conjecture is still not quite clear.

“Beth is separated from her family and submitted to a sinister “Attachment Therapy,” based mainly on the control, repression, and humiliation of children.”
-José Luis Cano Gil-

The work done at the medical center allowed Beth to adapt to life in the world. She learned to control her feelings of rage and to behave consistently. However, therapists such as Jose Luis Cano think that Beth simply learned how to pretend. He says her pain and hatred weren’t treated, only the consequences of her negative actions.

After all of that horror, today Beth is a nurse and gives talks on parenting methods and attachment therapy. She has earned several awards and has turned into a very successful woman. She even enjoys very good relationships with her coworkers and has a warm smile.

Beth Thomas’ case makes us think about how important it is for children to have a healthy childhood. Because as we just saw, a bad upbringing can have terrible consequences.

You Probably Know a Psychopath
This is what you call a psychopath, and even though it's hard to believe, there are many of them out there. Some can be found in the slums abusing animals, Read more »
Link copied!
Interesting Articles
Psychology
It's OK to Make Mistakes if You Learn from Them

When Thomas Edison let the world know how he had created the high resistance light bulb, after many trials and…

Psychology
When I Let My Ego Lose, I Gained Everything Else

Our ego is a product of poor emotional education, that has been focused around one idea: success means showing others…

Psychology
Beliefs That Prevent Us From Achieving the Life We Want

There are many self-help books oriented towards giving us guidelines for learning how to live fully and joyfully. Many of us…