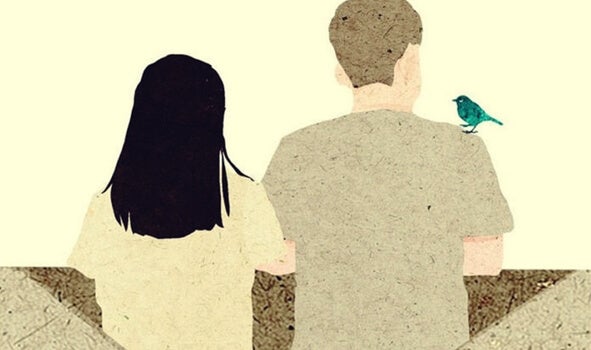 Changing your opinion doesn’t mean you’re moving away from who you are. You’re realizing the people you believed in aren’t trustworthy. You’re accepting that the path you thought was right wasn’t in the end. Also, you’re figuring out how to move forward with more perspective and maturity. So don’t forget that we all have the valuable right to change and grow.

As strange as it might seem, there are plenty of people who can see with clear eyes what they saw or did in a completely different way at some point. Those kinds of things usually surprise your family members, confuse your partners, or make your friends uncomfortable. But how could you like “green” now if you liked “blue” so much before?

But that’s basically it. Now you prefer the color green or red or cobalt.  It’s because all of a sudden you realized that there are more colors in life than what they taught you in school. Now you’ve discovered that there are also tones that go much better on you, flavors that wake up your senses. There are much more motivating and enriching smells, corners, and settings.

Changing your opinion at some point isn’t some kind of crime. And it doesn’t make you a wishy-washy or volatile person. Actually, people who can open their minds, be receptive to other stimuli, and are open to change are great at working on their personal growth.

The people who change their opinions lightly and thoughtlessly make us skeptical. It’s not easy to live with people who tell you one thing one day and another thing another day, or people who bitterly defend one set of values today only to reject them tomorrow and argue for the completely opposite ones. But that’s not the kind of behavioral pattern we’re talking about.

What we’re really talking about is an ability we should all work on: the ability to change and encourage human development. So being able to change your opinion about a topic, a behavior, or the way you looked at some specific person, is a lot like that exit line you can use to help benefit your advancement. It’s your only chance to take up other more useful points of view and perspectives.

A few years ago the social psychologists Ian Handley and Dolores Albar published a study in the Journal of Personality and Social Psychology about our unwillingness to change our attitudes. According to their research there’s one extremely revealing, central fact.  People who feel good about themselves and have a high self-esteem have much more open minds and are much more receptive to change. And on top of that they’re not afraid of changing their opinion at some point and being clear about why.

That fact also has a link to what two other psychologists, Melissa Finucane and Paul Slovic, labelled with the term “affect heuristics.” That is, people with a life focus that’s more flexible and open to experiences usually also make decisions based on the mental shortcuts they get directly from their emotions, or rather, “their instinct.”

They’re so experienced in self-knowledge that they have a kind of “radar” (voice in the back of their head) that lets them know when something isn’t good for them anymore. Or it can let them know when they should toss out certain ideals, people, or concepts because they’re causing dissonance, dissatisfaction, or unhappiness.

On the other hand, the people most unwilling to change their opinions or attitude use more sophisticated but less emotional heuristics. That’s the only way they can put up the walls to invalidate whatever challenges their preconceived ideas.

“If there’s one thing I’ve learned in life it’s to not waste my time trying to change my neighbor’s way of being.”
-Carmen Martín Gaite-

You have the right to change your opinion

You have the right  to change your opinion, to stop admiring someone without letting that make you feel bad. You do, you have the right to say now you like this subject, this hobby, or that area of knowledge you used to criticize. Maybe you only criticized it because you didn’t have the courage to get closer to it and find out what it had to offer you.

There are times when changing your opinion means growing, opening new doors, and quickly closing the ones behind you to move forward more securely and confidently. And none of that is bad. None of that makes you a bad person, it’s the exact opposite.

Of course there’s one thing you can’t leave aside while you take those steps.

Anyone who changes their opinion about someone or something does it because they’ve done some self-reflection. That helped them use those affect heuristics we mentioned before to remember where their true self was, and what their instincts and emotional needs were telling them.

So no one should make changes lightly, or change their opinions just because they feel like it. You have to do it with certainty. You need to have the confidence that there are some things that aren’t worth defending because there are better and more enriching options.

Give that a thought, and don’t be so afraid of change, whether it’s big or small.

Change is Born from your Example, not your Opinion
We often hear that actions speak louder than words. This is true, examples are more effective teachers than words alone. Helping someone needs no words. Read more »
Link copied!
Interesting Articles
Psychology
Respect Is Demanded, But Trust Is Earned

Are you one of those people who abandons everything because you think all hope is lost? Norman Vincent Peale said that "it's always too early to give up." Sometimes, when it seems like…

They say we all seek out our well-being. We all want to be happy. They say we do everything within our…

Have you ever felt that someone rubbed you the wrong way without even having spoken to them? Are you the…

Psychology
Psychosomatic Disorders: when your Mind Hurts your Body

Psychosomatic disorders are proof of the power that the mind can have over the body. In a psychosomatic episode, the patient…