Some women fall in love with psychopaths. According to experts, the reason for some women's fascination is a paraphilia called hybristophilia. Curious? Keep reading to learn more! 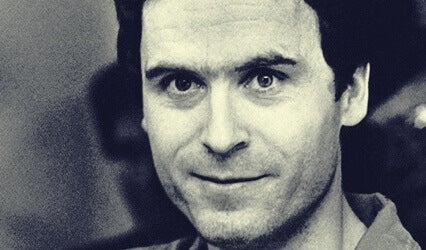 Ted Bundy, one of the most vicious serial killers of our time, got married while he was on trial to a woman named Carole Anne Boone. She was one of his greatest admirers, and they even had a child together. Charles Manson also received letters from dedicated fans declaring their love and fascination. What explanation is there for this phenomenon? Below, we talk about women who love psychopaths.

This isn’t a new phenomenon. Series like You, Dirty John, or Conversations with a Killer: The Ted Bundy Tapes seem to have inspired thousands of women to declare their attraction to deadly psychopaths on social media.

All of the scientific literature that documents this phenomenon might surprise you. As it turns out, it isn’t a rare occurrence. Complex and very interesting psychological dynamics are at play here. Here’s one example. We know that women who tend to be attracted to psychopaths are those who are more independent and have very strong characters.

Many of them firmly believe that their love has the power to cure a psychopath.

“No one can figure out how a dangerous psychopath curled up to them like a purring cat. Half of recovery is just trying to figure out ‘what was THAT?'”

Why do some women love psychopaths?

Richard Ramirez, known as “The Night Stalker,” murdered 14 people in Los Angeles between 1984 and 1985. During his trial, he acted like an animal in chains. He was aggressive, violent, and mentioned that he was a Satan follower several times.

His behavior didn’t prevent legions of followers from gathering at the courthouse doors to follow the trial. Nor did it deter someone nearly three decades later to create a Twitter account in Canada called @DailyKillerFact in homage to the murderer. Today, the account has more than 42,000 followers, mostly women.

What’s going on here? Why do we see posts that state “I’m Ted Bundy’s number 1 fan” or “I adore serial killers”? It’s easy to brush this off as an anomaly, or assume that these people just aren’t “in their right minds”. However, it’s important to delve a little deeper into the world of women who love psychopaths if you want to truly understand it.

John Money was a well-known psychologist who specialized in sexology. In the 50s, he coined the term hybristophilia, which is an attraction to criminals or murderers. Psychologists such as Mark Griffiths, a psychology professor at the Nottingham Trent University in the United Kingdom, argue that the term is broader than that.

You probably think that women who fall in love with psychopaths have low self-esteem, are insecure, and have weak values. However, that perception doesn’t coincide with the evidence that Dr. Sandra L. Brown, author of the book Women Who Love Psychopaths, found in her exhaustive research study.

Another important piece of data is that 30% of the women who love psychopaths have been victims of abuse or violent relationships. In other words, this behavior tends to repeat itself.

The media and the fascination with psychopaths

People have always been fascinated with narcissists, psychopaths, and people with Machiavellian tendencies. Evil behavior, in general, inspires an often contradictory interest. It goes against our principles and it’s unnatural, which is why we’re obsessed with trying to understand it.

The media play an important role in encouraging this fascination. How many movies and shows about psychopaths have premiered over the years? The wild success of Hannibal, Dexter, and even Breaking Bad are further proof that audiences are fascinated by the human capacity for evil.

It’s important to mention that this isn’t a passing phenomenon or something unique to our times. It repeats itself. It doesn’t matter how horrific the crime or how much blood the psychopath has on their hands. Women who love psychopaths always seem to come out of the woodwork. Thus, instead of dismissing this as a one-off thing, we should try to delve a little deeper and figure out why it’s happening.

Violence is violence. None of these bloody crimes should inspire any admiration or fascination.

Culture
How to Turn Sadness into Creativity

Sadness is an emotion we can feel at any given moment. It can lead to great discomfort and difficult times. However, we…