Life isn't a competition. To be happy, you don't need to be the best at everything. Did you know that, in reality, you should be better for yourself? 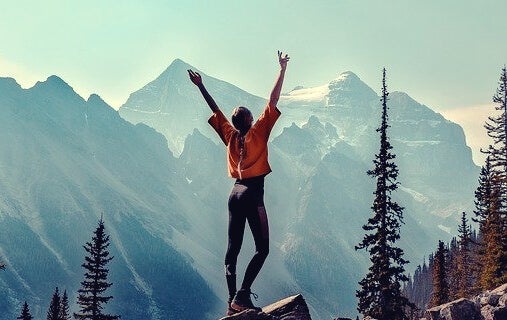 Winning at life doesn’t mean climbing podiums or winning gold medals at the Olympics. Believe it or not, life isn’t a competition, and it isn’t necessary to be number one at all times in order to be happy. There’s no need to compare yourself to those around you or put yourself to the test to prove you’re up to par. You can achieve authentic well-being by working hard and believing in yourself and in what you do.

Adults like instilling the need to compete in children. “Who finishes their homework first can go out to the playground.” “The one who gets the best grades will win a prize.” The truth is that there’s always the need to be better than others in order to win a reward.

All individuals have a natural capacity for effort and desire to reach certain goals. But you need to work for what you want and give the best of yourself. However, the problem is that many always feel the need to compete with others. In a way, they strive to crush other people and have an advantage over them.

These situations are quite common, and they sometimes subject individuals to indefinable wear and tear. Let’s learn more about this topic.

Winning at life is conquering happiness

Many people live their lives competing with everyone around them. They have to have the best job, the best car, the prettiest Christmas tree, and the most original birthday party. It’s a popularity contest, as if the defining feature of life was to be in a better position than the rest of the world.

However, there’s something evident in all this. All those who see their lives through this filter will constantly experience a single sensation: frustration. It’s safe to say that they’ll never be able to feel fully satisfied. At the end of the day, there’ll always be someone better than you at something. In brief, the need to compete and to be better than others leads to pointless suffering.

Winning at life should consist of conquering a healthy kind of happiness. One that’s all about surpassing yourself, setting goals, and testing yourself to achieve them. However, many people have spent decades applying what ecologists define as “the principle of competitive exclusion”. In other words, constantly challenging each other so that only the most advantaged are above the rest.

Nonetheless, this is changing. In this increasingly interconnected and globalized world, new social dynamics and, above all, urgent needs are arising. Now more than ever, it’s a priority to structure a more cooperative and less competitive life to solve the many challenges that lie ahead.

Why are some people so obsessed with competing?

We’ve spent a lot of time applying a competitive approach in many of our social settings. We do it because it was (and is) the only way to get a job, a place to live, and attention/respect among a certain group. But some people are so competitive in nature that they’re incapable of seeing things in a friendly way. What’s the reason for this?

Last but not least, it’s important to bear in mind that many highly competitive people tend to have narcissistic tendencies. These people don’t mind hurting others in order to come first. For them, “crushing” their opponent is completely fine and normal, just as long as they win in the end.

Winning at life is all about collaboration

If you want to win at life, challenge yourself. Don’t want what other people have. Keep in mind that it isn’t necessary to step on other people in order to be relevant. In the long run, you’ll be living your life for others instead of yourself. Seeing life as a non-stop competition is synonymous with suffering.

On the other hand, if you compete with yourself, things will be different. If you put yourself as a reference and set goals and challenges, you’ll feel more motivated and the reward will be a thousand times more satisfying. Little by little, you’ll learn that your own happiness is the most important thing.

Likewise, it’s important to remember that it’s time to create collaborative scenarios. In other words, it’s essential to begin considering other people’s points of view, ideas, and actions. Stop competing to create alliances and, instead, be able to move forward and create a better future with others.