The Impact of Happiness on Health According to Harvard

Harvard studied the impact of happiness on health. They found that those who are happy live longer and have fewer disabilities. 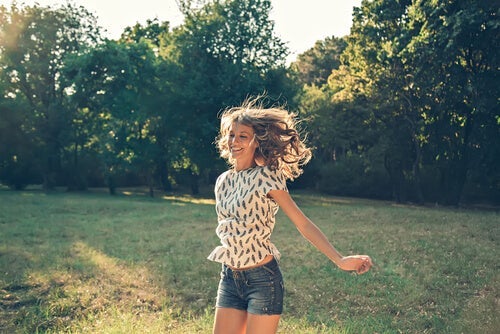 For a while, researchers have been discussing the impact of happiness on health. The question here is: can happiness lead to health? This the hypothesis that was raised at a symposium on the science of health and happiness in the New Research Building on Hardvard’s Longwood campus. Furthermore, researchers stressed that the aim of modern healthcare isn’t to improve health but to learn about disease.

However, in that symposium, they also talked about the importance of focusing on the positive side of events. This way, they raised the idea of focusing on assets that keep individuals healthy or help them recover from illness and injury in a faster way.

In fact, in the words of Dr. Laura Kubzansky, “More rigorous research is urgently needed to understand these positive assets and how to promote them for millions of people around the world”.

How did this investigation start?

It all started when the Lee Kum Kee family donated to create a new Center for Health and Happiness at Harvard’s T.H. Chan School of Public Health. This way, they financed a center to study how to increase happiness and health on a daily basis.

In fact, the set premise was to delve deeper into the impact of happiness on health. More specifically, to discover how happiness can give health a positive turn. Of course, speaking of happiness as one of the determining factors of existence and not as a nice phrase.

For her part, Laura Kubzansky, co-director of the Lee Kum Sheung Center for Health and Happiness, stated at the symposium that, for a long time, this field of study had been quite ignored, but that now it’s providing knowledge that supports the idea that health, wellness, and happiness are extremely related to one another.

Likewise, Francesca Dominici, the dean associated with research at the Harvard T.H. Chan School, assured that “the new center will focus on developing a “rigorous science” on how positive psychological and social factors can influence health and how to translate those findings into public policies with the aim of improving general health.

During this symposium, while researchers were discussing the impact of happiness on health, there was another simultaneous discussion on how to turn the findings on the matter into public policies. This would reduce the gap between academic institutions and people’s needs during their daily work.

The impact of happiness on health

Being happy leads to two things. For one, it leads to a state of absolute mental satisfaction. Secondly, several pieces of research continue to verify that it has a notable influence on a physical level. In this way, there’s the possibility of verifying the substantial change from a state of happiness to a state of sadness even at a chemical level.

Let’s explain how this works. When an individual feels happy, this emotion travels through the entire body. Then, countless endorphins are released through the spinal cord and bloodstream throughout the body. This happens in many different situations. For example, when they’re with loved ones, when they listen to their favorite songs, or when they take a walk. This way, the individual notices an improvement in their mood and even decreases the intensity of certain pains.

Another individual who conducted research on the impact of happiness on health was Andrew Steptoe, director of the Institute of Epidemiology and Health Care at University College London. He reported that there’s a relationship between well-being and health since he found that those individuals who enjoyed life more not only lived longer, but their aging process was slower.

However, Harvard reports that an additional study showed that those who feel most satisfied with life are most likely to be physically active, eat healthy foods, and wear sunscreen, as well as being less likely to smoke.

Additionally, studies have shown that less happy people have higher levels of fat and cortisol, the hormone that generates stress. There have been quite a few advances between studies regarding the incidence of happiness on health. Despite this, many questions remain unresolved.

The goal is to stay happy despite everything

The concern for happiness is an inherent condition of human existence. However, this concern must coexist with many others that aren’t always compatible.

Understanding that most of your security lies in the present and not the future is a long-term job. However, things take a turn once you start working with this idea or approach. In a way, problems become growth opportunities instead of worries.

Happiness Is a State of Mind
Some people believe that happiness is at the top of a mountain that they have to climb. However, the truth is that happiness is a state of mind. Read more »
Link copied!
Interesting Articles
Research
Susan Lee Smalley and Gene Changes through Meditation