Why are Some People Obsessed with Accumulating Money and Possessions? 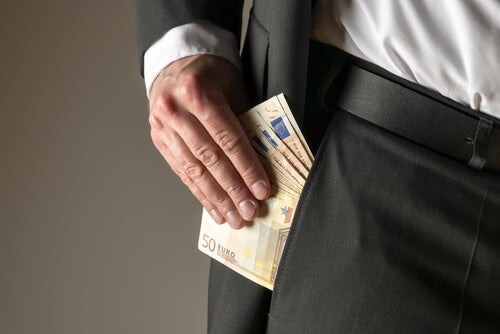 We all know stories of very wealthy people who’ve ended up ruining their lives because of their excessive attachment to money. Fraud, corruption, jail, and debt are just some of the consequences of being obsessed with money.

Some people have a complete obsession for accumulating wealth and possessions and it’s actually considered a mental illness. All they care about is acquiring more and more. Family, friends, partners… they fade away when there’s a possibility of increasing income or belongings.

Their mind obsessively fixates on the idea of making money, without considering the consequences of their obsession.

Money, in its rightful measure, helps us live better in a world dominated by capitalism. But let’s not forget that money is still just a piece of paper with an exchange value. Having enough money to live with dignity is necessary: we have to feed ourselves, put a roof over our heads and clothes on our body.

An obsession for money

A person obsessed with money never feels like they have enough.

But it’s not just about depositing large amounts of money into your bank account. In the society we live in, having money is closely related to success. And success, in turn, relates to our value as human beings.

The need for approval is so great that it has led people to make great sacrifices, to get into debt with the sole aim of being successful and deserving of admiration… and even to commit crimes.

If we go deeper, we’ll see that, apart from the social recognition money can give, there’s actually more. There’s an addictive adrenaline rush from doing prohibited or criminal things.

And acting recklessly can actually become a powerful drug for these people. It distorts their worldview, making them think that they are more interesting and attractive.

What do they achieve?

What do they actually achieve with all of this? Like anytime people prioritize short-term hedonism, they lose their values and deepest beliefs. Nothing matters anymore, while at the same time, no amount of money, possessions, or achievements is enough.

In addition, in the long run they lose their friends, destroy their family, get into problems, and end up feeling terribly alone.

This obsessive need to be accepted — since they lack self-acceptance — ironically gives them the very situation they fear.  They’re left alone and devoid of the approval they have sacrificed everything for.

They never completely fill the mental need they’re harboring. Then it becomes obvious that the solution to their inner emptiness isn’t in anything as superficial as money, property, or goods.

The solution is to reevaluate your values and realize that everything you truly need is already in your hands.

Examples like the wolf of Wall Street or political corruption are hard-to-deny examples of what we’re trying to say. People are so empty that they need something external to cover over that emptiness. What leads these people to always want more than they already have? What kind of life do they really want?

The image interests them, not money itself. They have a need for recognition, to be seen as attractive and powerful, in addition to illicit excitement.

The need for approval

It all stems from here. It seems that this need for approval still haunts us, even though we’re aware we’ll survive without acceptance.

To eliminate this absurd pseudo-need would be the end of this psychological illness. We would realize that money is an illusion. Because the truth is that it serves no other purpose than to meet the material needs they are already met.

Human beings need very few material things in order to feel satisfied in this world. When we get something, we like it for a little while, and then we think we need an upgrade. And it’s something that all the major brands know full well, and it’s why new models are constantly coming out.

Behind all of this is the following need: to show something to those around us, get compliments and then we feel happy. We must not forget of course that this happiness is very fleeting and can disappear in an instant.

Let’s not be deceived: what really gives us happiness is being satisfied with the little things in life.  It is showing love to ourselves and accepting ourselves just as we are.

Do Something Good Every Day. Goodness Is More Rewarding Than Money
It is good that we have phrases like this in our mind: "Do something good every day for yourself and for others." Read more »
Link copied!
Interesting Articles
Clinical Psychology
How to Deal with a Panic Attack

We tend to think that we are a certain way, that it hasn't changed since we came into the world, and…

Emotional dependence is a complex condition. Generally it does not obey any one rule, and creating it and maintaining it…

Interesting Articles
Social Psychology
Some People are Victims of Circumstance