Why Is Grieving Over Toxic Relationships More Difficult?

Ending an important relationship is always painful. However, if it was also a toxic relationship, then the suffering can be even greater for different reasons. 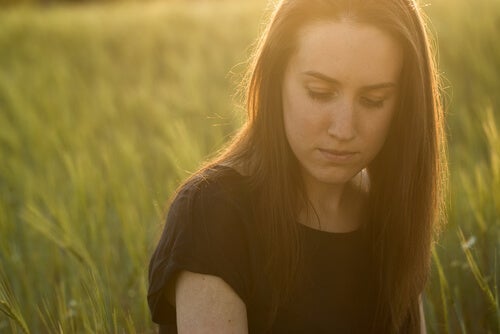 The end of a relationship is painful. Nevertheless, the grieving process associated with the end of toxic relationships is usually a lot more complicated. Why? Due to the specific characteristics of these types of relationships.

When we talk about toxic relationships, we usually think of couples. However, any human interaction can have a harmful dynamic. Thus, both the end of a friendship and the death of a close relative can be complicated. This is especially the case if there wasn’t a healthy bond.

Why does grieving for toxic relationships get complicated?

It may seem rather illogical that it’s more difficult to let go of people who have harmed us than those who have given us their love. Those who are dealing with the loss of a toxic relationship often encounter misunderstanding and judgment from people around them. Therefore, to understand the situation better, we need to take a closer look at certain important factors.

Generally, the people who establish toxic relationships and maintain them have certain emotional issues they need to work through. It’s common for these people to have a strong fear of rejection and abandonment. Also, it’s normal for them to feel insecure, indecisive, and emotionally dependent.

The relationship covers these internal wounds to a certain extent (albeit in an unhealthy way), and the dependent person focuses all their energy on their partner. When the relationship ends, they have no other option than to confront their own internal world. They need to focus their attention back on themselves.

This means that their fears and wounds resurface even more strongly, making the situation emotionally unbearable. Let’s remember that. when we’re grieving, we have to support ourselves to a great extent. However, if that part of us that should provide support is wounded, then we won’t be able to support ourselves adequately.

One of the aspects that suffers the most when someone gets involved in a toxic relationship is self-esteem. This type of relationship, where a person experiences so much suffering, totally undermines and destroys the individual’s self-confidence.

Self-value diminishes the longer they remain in that harmful relationship. As a result, they end up feeling weak, inadequate, and unable to cope without the other person.

Self-esteem is essential in order to be able to detect abuse and put an end to it. It reminds us that we’re valuable and capable of standing on our own two feet. It’s the force that shows us we shouldn’t tolerate any kind of abuse, even if the consequence is loneliness.

As we mentioned above, toxic relationships destroy self-esteem. The person is undervalued, and they think they don’t deserve any more than what they’re getting. In addition to that, their confidence in their own abilities diminishes so much that they aren’t able to face the break-up.

The focused mind that a person needs to be able to say “enough is enough” has been broken by continuous humiliation.

Finally, when a relationship has been healthy, then there usually aren’t outstanding issues. Both partners have fulfilled their roles, and have brought affection, security, and understanding to the other. Thus, when those paths are separated, it’s easier to make closure by focusing on good memories and positive feelings.

On the contrary, when grieving over toxic relationships, emotions such as anger, resentment, rage, and disappointment usually come to the fore. In this type of relationship, the weaker partner has the idea that their abusive partner must reward them for all their efforts and the suffering they’ve endured.

They’re forever hoping they’ll change at some point and repay them for all their commitment. When the relationship ends, this hope is broken and anger boils up.

In addition to this, during the grieving process, dysfunctional thoughts often arise. The person starts to question why they weren’t good enough, why the other person never loved them, or what they could’ve done to make things turn out differently.

This often leads to negative thoughts that intensify the discomfort and make it difficult to cope with the situation effectively. However, it isn’t impossible to overcome the grief of toxic relationships.

Grieving over a relationship is similar to the condition of that relationship. In healthy and respectful relationships, the grieving process is more calm and rational.

On the other hand, after a toxic relationship, the grief will be mixed up with the same suffering and despair that characterized the relationship.

In order to move forward, the person will need to carry out some intensive personal counseling that will allow them to re-establish the pillars of self-esteem and trust. These are truly essential for them to be able to experience healing and not repeat the entire story again.

Strategies for Coping with Grief and Their Consequences
The strategies you use to cope with grief will either help you or make it more difficult to face your loss. Read on to learn more! Read more »
Link copied!
Interesting Articles
Break-up and Divorce
Getting Over Someone After a Breakup

Break-up and Divorce
Custody Options and their Effect on Children

A divorce is an event that can be very emotional and create mixed feelings. In this context, legal psychology pays…

Break-up and Divorce
A Breakup is an Opportunity for Transformation