Why Do We Have Group Norms? 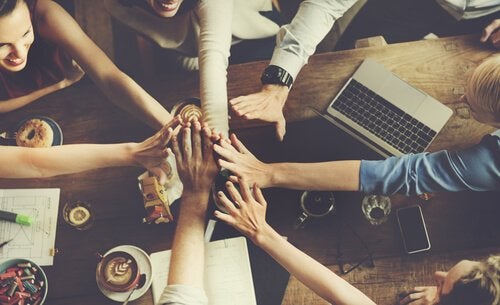 If you observe different social groups, they all have their own group norms. It doesn’t matter if they are formal or informal groups. These norms are part of our social life, and we accept the vast majority of them as fair and essential. That said, it is worth asking the question – how do groups come up with these norms? What purpose do they serve within the group?

Before responding to these two questions, we should set down a definition of “norms.” This is important to understand their origin and function. Homans defined “norm” as an idea that occupies the mind of the group members. It acts as a reference point when reality is ambiguous. It serves to regulate attitudes and behavior. In addition to the definition, it is important to understand that there are two types of norms:

The purpose of group norms

We know that all groups make norms. So, we can deduce that they must serve some kind of function for the group dynamic. Or, at the very least they have some kind of consequence in the group. Otherwise, their existence would be pointless. These functions can be individual or social. They are individual when the consequences affect the subject. When they satisfy the group’s needs on a social or intergroup level, they are social. In most cases, the norm has both functions.

The primary function of group norms on the individual level is to serve as a reference point. Thanks to the norms, the individual knows how to interpret and construct reality. This function fits perfectly in certain social-constructivist paradigms. These paradigms propose we construct reality through a culture of society and culture. Groups and their norms are the active agents of this process.

On a social level, group norms have the following purpose:

How do groups create norms?

The development of norms is a question has tormented many social psychologists. The analysis of Levine and Moreland looks at a large number of theories and experiments about how groups generate norms. Thanks to them, we can say that group norms have two different origins: an internal origin or an external origin.

Among the internal origin factors we find:

The most common and noteworthy factor of with respect to the external origin is when an institution or a leader dictates a norm. These norms tend to come from outside the group or from an individual member of the group. Consequently, the rest of the group is much more likely to reject it than they would if it had an internal origin. But it depends, in a large part, on the agreement and compatibility with the goals of the group.

Group norms are part of our day-to-day lives. They influence everything from how we do our jobs to how we dress for a party. Their influence is noticeable in our behavior, and usually in an implicit and unconscious way. Because of this, it’s important to understand the norms and their function. That will help us to see them with a critical eye and avoid acting against our morality or personal identity.

Social Identity: Why We Feel The Need to Belong
Social identity is the measure of how we identify with a group or a movement. But it is also a lot more than that. Read on to learn more about social identity. Read more »
Link copied!
Interesting Articles
Psychology
Being More Creative is an Achievable Goal

Psychology
Find Someone You Can Be Vulnerable With

Finding someone you can let yourself be vulnerable with is one of the best signs that your relationship is working, according…