White knight syndrome characterizes many people who grew up neglected. Their need to save others is almost compulsive, although they don't always do it in the most efficient way. 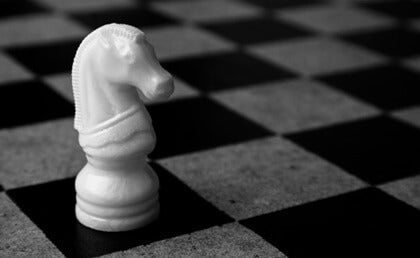 A person with white knight syndrome has a compulsive need to save and help people and try to solve their problems. There’s a history of abandonment, trauma, and unrequited affections behind their behavior. Hence, they have a high ability to empathize and will try to help others, even though their efforts may not always be appropriate.

Who doesn’t know a born rescuer? A person who seems to have a need detection radar and is always there when you need them. They can become intrusive at times, as you well know. Their “kindness” can even make you uncomfortable. Perhaps this is because it takes away your opportunity to be responsible and solve your own problems.

Other times, of course, you may appreciate someone’s sincere and dedicated altruism. However, what you may not see at times is the background behind their dynamic, their needs. White knight syndrome defines a part of the population. These people are often invisible. Thus, their behavioral profile consists of hidden wounds that few people notice, things they haven’t yet effectively resolved.

This syndrome was first described in 2015 by the University of California, Berkeley psychologists and professors Mary C. Lamia and Marilyn J. Krieger. Continue reading about it below.

“Tears come from the heart and not from the brain.”

The characteristics of white knight syndrome

In storybooks, a white knight is often a man who saves a woman in distress. In real life, this figure could be a man or a woman. Also, they have a tendency to initiate emotional relationships with vulnerable or damaged people. This bond allows them to feel useful and their intention is to affectively repair one another. In other words, to affirm themselves and their significant other at the same time.

However, injured people can seldom repair anything. Instead, they often enhance their wounds by being the mirror for trauma and suffering to reflect and magnify. Their failed rescuing attempts only frustrate them and inevitably lead to unhappiness. Thus, what’s hidden behind white knight syndrome and can explain their behavior is:

Abuse, authoritarian parents, or the lack of healthy and affectionate bonds during childhood are all common in those who suffer from this syndrome. Abandonment is a common trigger, both at a family level and in romantic relationships.

White knight syndrome manifests in many ways. It’s a part of a behavioral spectrum that ranges from normal characteristics to pathological extremes:

People afflicted by white knight syndrome need to save themselves

Being a “balanced” white knight doesn’t exempt you from the real problem. This is because you’ll continue to kill foreign dragons while holding a sword and a helmet to fight battles that aren’t yours to fight. Helping people in need is indeed noble. It’s good to lending a helping hand to the people you love. However, no one deserves to live their life as a mere savior.

You can only resolve white knight syndrome in one way: by saving yourself. You must undertake the most difficult journey of all. One in which you take a trip to your internal universe and confront your own demons in order to understand and overcome them and enlighten yourself.

The bravest deed a white knight can do is save themselves.

The Drama Triangle: Victim, Persecutor, Rescuer
In this article, we're going to talk about the drama triangle, and the roles of victim, persecutor, and savior that come up in inauthentic relationships. Read more »
Link copied!
Interesting Articles
Personality Psychology
Do You Find It Hard to Relate to Others?