When You're Trapped at an Affectionless Emotional Age 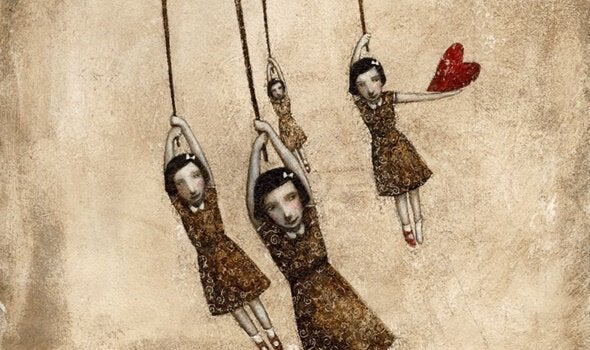 A lack of love is something that really leaves a mark, especially at certain ages. But sometimes it makes such an impact that you end up getting trapped at something called an affectionless emotional age.  In other words, the lack of affection and love stops you from developing and you won’t be able to move forward until you heal.

The concept of “maturity” is basically just that: a concept. In a practical sense, we all have many different ages within us. Some of them stick out more, but the other ones are there too. That’s really lucky for us, because it helps us enjoy things with childish joy while dealing with problems with adult wisdom.

But there are also certain circumstances that can leave you at one specific age. You usually end up tied to an affectionless emotional age if you don’t do anything about the problem.

It might even have its roots during your early childhood. If that’s the case, even if you’re well-advanced in years, you might be the same emotional age as the scared, hurt child you used to be.

“Am I only writing about causes and not talking about effects? I may be writing the story of something that was missing, but that doesn’t mean it’s missing a story.”
-[Translation] Andrés Rivera-

When you’re young, just about every experience will have a big impact on you. It’s the part of life when you set the foundation of who you are and who you’ll be. That doesn’t mean you don’t still have a need for affection later on, though. It just means that it’s absolutely necessary in your earliest years.

When a 1-2 year old child doesn’t get affection, the first thing they lose is their sense of trust. Children always expect their parents, or whoever takes care of them, to see to their needs.

Lack of affection, autonomy, and independence

At these ages, loving parents or guardians will foster autonomy with affection and without any rush. They won’t ask anything of their child that’s beyond their developmental level and learning abilities.

Children usually stay on this path to independence from between 3 to 6 years old, though there are never exact ages or dates when it comes to human beings. No matter what, though, this is always the age when they start truly exploring the world.

When a child is well-loved, they’ll go on this journey without any fear. If they’re not, they’ll probably feel uncomfortable and afraid, even if there’s nothing scary or dangerous out there.

Once they’re old enough for school, children will develop a love of work and efficiency. That is, if they have a loving support system. If they don’t, they’ll do their schoolwork with a feeling of inferiority.

The effects in adulthood

Usually you realize that you’re trapped in an affectionless emotional age when you see certain personality traits as an adult and don’t really know where they came from. You usually aren’t able to change either, even when you are convinced it’s necessary. Some traits include:

So what can you do? It’s usually possible to heal a wound caused by lack of affection. But it won’t just heal itself, either; you really have to work at it. It’s a good idea to look for ways to help that affectionless child openly express themselves. Give this inner child room to talk and say how they feel, whether you write it down or talk about it with a therapist.

Seeking Someone Who Does Not Want To Be Found: Indifference
Read more »

The discussion about happiness and unhappiness could go on forever. Happiness is such an abstract and relative concept. It is nearly impossible to theorize about it without hitting a dead…

Wellness
Why Do We Fall Out of Love?

We all know what love is like, the phases we go through, and what we need to do to keep it alive....but, what happens when we fall out of love?…

Wellness
Ignore Those Who Try to Darken Your Brightness

In order to be happy, we have to ignore many people. We have to learn to live and to pay no…

When I look into the eyes of my dog, my cat, or any other animal, I do not see an…

Wellness
By Loving Solitude You Become a Better Partner

The value of solitude is still not recognized by society. We tend to think that those who prefer it as cold people. We get…