What's Bugchasing and Why Would People Intentionally Infect Themselves?

Bugchasing is seen by some as a form of self-harm, and by others as an assertive way of taking control of something they already know is going to happen. In this article, we explore this movement. 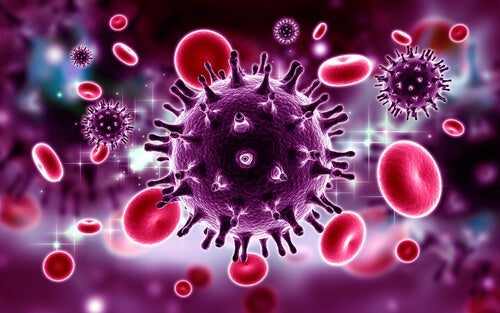 People have different preferences. Some even intentionally seek to harm themselves. Bugchasing is an example of how some people consciously expose themselves to danger.

Throughout this article, we’ll tell you more about this practice. You’ll be able to discover what it’s all about, why it’s a movement, and what motivations drive those who partake in it.

Bugchasing is a movement and subculture that stemmed in the late 90s in the United States. The bug the name refers to would be the human immunodeficiency virus (HIV). The bugchaser is the one who’s trying to contract the virus. Those who “give the bug” are called giftgivers. They transmit the virus to others.

Therefore, there are those who are HIV positive, and those who decide to get infected. By mutual agreement, they perform sexual practices that will favor the transmission of the virus.

Why is this practice so intriguing? This is because both the carrier and the person who wants to get infected clearly know that they’re going to infect or become infected with HIV, a virus that has great health risks.

Therefore, it’s a dangerous, yet voluntary, practice. Experts haven’t yet established whether the people who engage in it do so under manipulation or by choice. In any case, bugchasing has already sounded the alarm in many different health organizations.

What’s the motivation to belong to the movement?

Motivations can be varied, and will largely depend on the uniqueness of each person. However, experts have observed that some people’s motivation could be:

There are also theories that state that this behavior is associated with the personality of the subject. Some research even shows that some people who belong to this movement show interest in activities such as scatophilia (coprophilia), urination, and exhibitionism, as well as having dependency traits.

We define bugchasing as a movement because it’s a group of people with common interests, who promote practices with a common thread. It’s not just about a group that wants to spread the virus, or a group that wants to get infected. It’s a group of people who are looking to have sex to mutually and voluntarily spread HIV, and who promote it in this way.

The people involved in bugchasing claim that it’s their free choice and entitlement to have unprotected sex. Therefore, they’re reluctant to see what they do as a type of sexual deviance. However, as it’s a practice that’s putting health at risk, several investigations are underway, both to launch prevention strategies and to provide answers for the reasons behind this behavior.

Currently, we can find this practice all around the world, and it’s becoming increasingly widespread. People who belong to the movement or who want to belong are even contacting each other through social networks.

Chemsex: a Dangerous Sexual Practice
In recent years, Spain has seen an increase in a dangerous sexual practice known as chemsex. It is especially common in cities with a large population. Read more »
Link copied!
Interesting Articles
Sex
Characteristics of Sexual Fixations and Paraphilias

Sex
Fantasizing About Someone Else When Having Sex - Is it Normal?

Have you ever fantasized about someone else whilst having sex? Many people do this to heighten the excitement of the…