What's Behind the Martyr Complex?

Today's article is for those people who exploit the pleasure of placing themselves in the position of victims by making a lifestyle out of their sacrifices. The term for this is martyr complex. 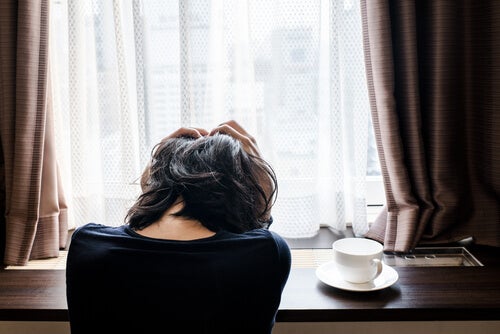 The martyr complex is about people who put others ahead of themselves. They may even think that other people’s experiences are more important than their own. Thus, they adopt the role of a victim. In other words, they’re the ones who suffer the most and do so very intensely. This way of experiencing life is what psychology refers to as the martyr complex.

From psychology, one can understand that adopting this attitude is practically voluntary. This is because pain and persecution feed certain psychological needs. It’s common for people to justify martyrdom under the guise of love, duty, and sacrifice.

Curiously, the search for suffering also leads the martyr to feel better about themselves somehow. In their view of the world, awarding themselves a penalty is an act of kindness. This is because it doesn’t touch another person and, thus, makes them feel more valuable. However, this is a self-destructive pattern, as they decide to ignore their own needs. Thus, they find and perpetuate situations that distress them.

The behavior of someone with a martyr complex

In order to identify a person who may have this complex, one must look at various behaviors, thoughts, and values. Among them, the fact that a person:

How to act around these people

Relating to a person who has a martyr complex isn’t an easy task. This is because they constantly talk about how badly they have it and it can seriously affect you.

Also, because they try to make you feel in debt when they help you. Therefore, to deal with this person, you must implement three simple strategies:

If you have a martyr complex

More difficult than treating someone with a martyr complex is realizing and admitting that you do. Therefore, if you believe that you tend to act like this, then evaluate your behavior as follows:

“The martyr sacrifices themselves entirely in vain. Or rather not in vain; for they make the selfish more selfish, the lazy more lazy, the narrow narrower.”

Firstly, you must realize and acknowledge there’s a problem, as this is the most important step towards change. Then, you must look for other ways to act and understand they don’t make you a bad person. This is because being accepted or loved isn’t determined by what you do, but by who you are. Thus, striving to please and meet everyone’s needs is a mental burden that leads nowhere.

Find different ways to interact in your relationships. Take on a different role. Perhaps it’s time to take the initiative, make your own decisions, and start fending for yourself if you’ve lived your life around others until now.

It’s fundamental that, in this process of change, you consider whether this is a way of relating in a balanced way. Also, you must think about whether you’re placing yourself above, below, or next to another.

Above all, assume your responsibilities and respect the freedom of others. It’s time to assume your mistakes and understand that each person reacts and understands life in their own special way. Thus, yours shouldn’t depend on theirs.

Finally, talk to others about your change process. Surely they’ll understand and value it and may even help make it easier and more bearable. However, be patient. There’ll be people who may have taken advantage of this situation or who simply need more time to adapt to the new you.

Self-Sacrifice and Family
There are families with a culture of self-sacrifice. This type of family teaches its members that they "should" make sacrifices for the sake of the family. They foster the idea that an individual must put their own needs and desires after those of the family unit.  Read more »
Link copied!
Interesting Articles
Social Psychology
Three Kinds of Falsehood: Simulation, Lies, and Deceit