Insurgency is a complicated term. In this article, we try to define it and identify the factors that make an insurgency successful. 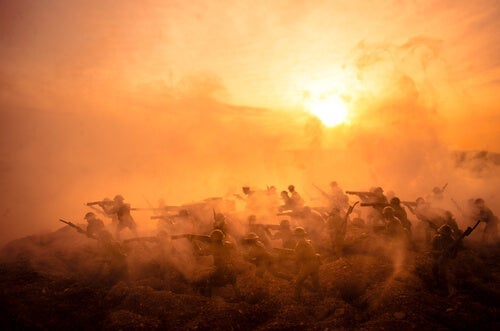 Many people are confused by the term “insurgency”. For example, is the Islamic State an insurgency group or a terrorist group? It’s not an easy question to answer due to all the changes this group has undergone over the years. Nevertheless, to be able to call something an “insurgency”, you first have to know exactly what it means.

It might be helpful to list some groups that experts have considered insurgencies before talking about the definition. Some of the most well-known names in this category are the Islamic State, Al Qaeda, and Boko Haram. Others are the FARC, the Taliban, Hezbollah, Hamas, the ETA, and the IRA. Although some of these have fallen by the wayside, experts have considered all of them insurgent groups at one point or another.

Finding a simple and precise definition for insurgency is a difficult task. Nevertheless, we can highlight some points of commonality that different definitions of the word have. Basically, you can say that an “insurgency” is actions a minority group within a state takes in order to force political change. So, at the very least, it has political objectives.

By the same token, insurgencies make use of propaganda or military pressure in order to persuade or intimidate a population. Their goal is to gain popular support. As such, their recognition and acceptance by the population at large is pivotal and essential to their success or failure.

Finally, an insurgency also has the quality of inequality in terms of forces. Given that the state tends to have much more power, insurgent groups prefer asymmetric and prolonged encounters with the government. As such, psychological warfare tends to become their primary tool.

“Like a wild animal, the truth is too powerful to remain caged.”

How people start and consolidate an insurgency

In order for an insurgency to be created, the following factors have to be present:

Aside from this, there are other possible classifications. Some people also classify them along the lines of their goals.

You can divide goal-based insurgency classification into three types:

The five pillars of insurgent activity

Insurgents can make use of five strategic instruments in order to reach their goals. The list is as follows: armed struggle, propaganda, social aid, social and political activism, and the cultivation of external relations.

As you might be able to deduce from this outline, insurgencies strongly resemble the products of other violent groups who make use of terrorism and guerrilla warfare. Telling them apart isn’t easy. Nevertheless, the factors that set the stage for them, as well as those that lead to their success, are clear.

The Differences Between Terrorism and Organized Crime
Although organized crime and terrorism present some similarities, they’re different phenomena. Read this article to learn more! Read more »
Link copied!
Interesting Articles
Social Psychology
Get to Know the Psychology of Persuasion