What Your Signature Says about You 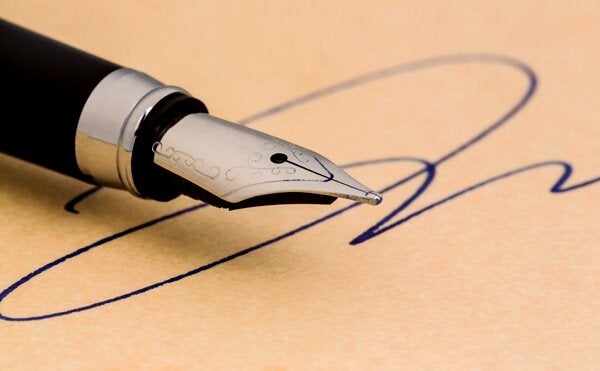 A signature is more than just a scribble that serves as legal identification. Beyond that function, it also reflects personality features, fears, and secret ambitions.

Even though you can’t know somebody’s personality just by looking at their signature, it does offer important clues about them. Some even say that a signature is like a synthesized autobiography or self-portrait, in terms of the evaluations that people make of themselves.

“Writing is the visible projection of thought.”

Unlike other forms of writing, one’s signature also involves the flourishes and strokes that accompany or replace the name. That is, all the lines, adornments, or distinctive elements that are added, basically so that the signature isn’t easily forged, but also to unconsciously provide information about ourselves. Here are some of the main interpretations of signatures:

One of the main elements of the signature to observe is the way the name is written. Some people write their names completely, while others shorten it or simply omit it altogether. Consider the following variations:

The size of the signature is also important. Large signatures correspond to people who want to have a high status or be noticed, while small signatures indicate that the person wants to go unnoticed. If the first name is bigger than the last name, this suggests that the person is attached to childhood experiences. If the last name is bigger, this represents a great need to be socially successful.

What the style of signature tells us

In graphology, there’s a saying that goes “less signature, more personality.” This means that simpler signatures identify people who feel more secure in themselves, and vice versa. There are also other elements of signatures that describe the signer.

Location of the signature

The way the signature is positioned on the paper also offers clues about people, and in particular, how they relate to themselves and the world. Whether the signature is slanted or placed towards the left, middle, or right suggests different temperaments.

Does Your Country of Origin Influence Your Personality?

Link copied!
Interesting Articles
Culture
Being an Only Child: Advantages and Disadvantages

There are tons of myths about the personality of an only child. Some are true to a certain extent, but…

Frida Kahlo is one of my favorite people. She was an intense, brave and magnificent woman who left an incredible legacy,…