What is Hoarding Disorder? 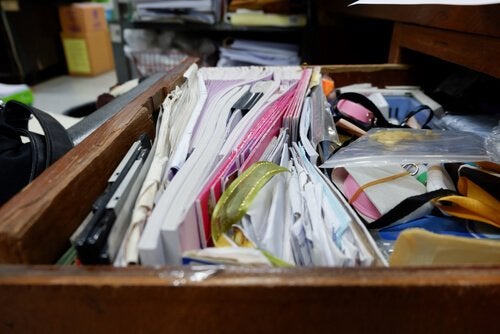 You’ve most likely heard about Diogenes syndrome. People with this disorder are characterized by social isolation, domestic confinement, and self-neglect. It turns out that hoarding disorder could actually be mistaken for Diogenes syndrome.

However, it’s not the same thing. The main difference is that people with Diogenes syndrome do more than accumulate useless items. They also accumulate trash and waste, and their self-neglect goes to the extreme.

An individual with hoarding disorder has a hard time discarding or getting rid of their possessions. The actual worth of these possessions doesn’t matter. They could be objects of little financial or sentimental value.

Trouble getting rid of things may be apparent in different situations, like when attempting to sell, discard, gift, or recycle them. The reason, they claim, behind it resides in the aesthetic value or utility of the objects. It could also be a sentimental attachment or a situation of “what if?” or “just in case.”

These people buy a new computer, but don’t get rid of the old one just in case the new one breaks. On the next update, they still keep the previous models just in case the two new ones fail. And so on and so forth…

Some people feel responsible for where their things end up. Oftentimes, they do everything they can to avoid being wasteful. Plus, hoarders are often afraid of losing important information.

How is hoarding disorder diagnosed?

The Diagnostic and Statistic Manual of Mental Disorders (DSM-5) lists a set of diagnostic criteria for hoarding disorder:

A. Persistent difficulty getting rid of or giving away possessions, regardless of their real value.

B. This difficulty is due to a perceived need to keep things and the discomfort felt when they are discarded.

C. The difficulty getting rid of objects gives way to hoarding things, which cram habitable spaces and greatly alter their intended use. If their living areas are clear, its only due to outside intervention (for example, family members, cleaning crews, authorities).

D. Hoarding causes clinically significant discomfort or impairs the individual’s life. This includes their social lives, work, and the upkeep of a safe environment for themselves and others.

E. No other medical condition can explain it (for example, a brain injury, cerebrovascular disease, Prader-Willi syndrome).

A home full of useless things

The objects that people usually hoard are newspapers, magazines, old clothes, bags, books, electronic equipment, and paperwork… Practically anything can be hoarded. They’re not just possessions that most people would define as useless or worthless. Many people gather and keep very valuable things. These things can often be found among other objects of less value.

People with hoarding disorder voluntarily accumulate their possessions. It upsets them when they think they have to throw them away. Thus, the hoarding and accumulation are intentional.

This characteristic differentiates hoarding from other types of psychological pathologies. Other disorders involve the passive accumulation of objects or the absence of anguish when someone gets rid of them. That’s how they’re different.

People who accumulate a lot of items end up cramming and cluttering their homes, making them hard to live in. For example, they might not be able to cook in the kitchen, sleep on their bed, or sit in a chair in the living room.

When living spaces are usable at all, it’s usually very difficult to do so. The mess is usually made up of a large number of objects, usually unrelated. They may also be loosely related, stacked together in a disorganized manner in areas meant for other uses.

As we saw in the diagnostic criteria, point C affects the active living spaces in the home, instead of the peripheral areas like the garage, attic, or basement. These areas may also be disorganized in the homes of people without hoarding disorder.

Hoarders often possess things that occupy their active living spaces and may inhibit the use of other areas, like their vehicles, workplaces, or the houses of friends or family members.

In some cases, living spaces may not look messy because family members, professional cleaners, or local authorities have intervened. However, in this case, people may still experience symptoms that meet the diagnostic criteria because they weren’t the source of the cleaning.

Hoarding disorder is different than normal collector behaviors, which have a certain systematic organization.. Collectors don’t produce clutter or feel upset about losing it.

As you’ve seen, hoarding disorder consists of gathering items that may or may not be useful. The severity of the disorder increases over time and often becomes chronic, especially without intervention.

I know that many articles have been written on the topic of emotional intelligence, but can any of you define…