What is Dopamine and What Does it Do? 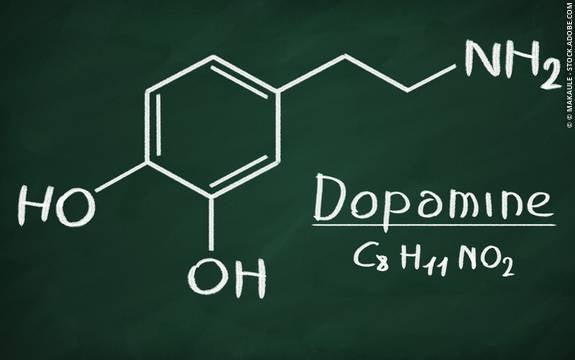 Its main function is to activate the reward circuits in the brain, but it also has other, lesser-known functions. Dopamine acts to both activate and inhibit brain activity depending on where it’s released.

First of all, neurotransmitters are biomolecules released in the synapses of neurons whose job is to transmit — or alter the transmission of — information. As for dopamine, dopaminergic neurons are responsible for releasing and producing this neurotransmitter.

Dopamine is synthesized by the amino acid tyrosine and accumulates in synaptic vesicles at the axonal terminals of dopaminergic neurons. These neurons are found mainly in a part of our brain called the substantia nigra.

Then, those neurons spread out through different pathways, each with a different function. Now we’ll explain what these pathways are and what they do.

Here, neurons go to the different areas of the limbic system, such as the nucleus accumbens. The limbic system is the primary system in charge of emotional processes of our brain. This is where dopamine plays a big role in various emotional behaviors.

One is the management of the brain’s reward system. When we do things our body values ​​as beneficial, it releases dopamine along this pathway, creating a subjective feeling of pleasure that leads us to repeat these behaviors.

Interestingly, these behaviors range from the biologically-programmed, such as quenching hunger or thirst, to the purely social and learned.

The addiction produced by drugs occurs because they stimulate the reward circuit very intensely. Therefore, our brain sees the consumption of these substances as beneficial to us. And so we repeat it.

These are the pathways that lead to the prefrontal cortex of our brain. This area is responsible for executive skills, i.e. planning and decision making. Dopamine acts in this area to generate alternatives, choose the most appropriate one, and move towards it.

A dopamine deficit in this area (as in the case of schizophrenia), causes a strong cognitive flattening. The individual stops reacting to external stimuli and seems not to care about anything. That said, other alterations in this pathway are related to disorders such as ADHD or depression.

The axons of these dopaminergic neurons reach toward the basal ganglia of our brain. This pathway is part of the extrapyramidal nervous system, which is responsible for controlling our body’s motor movements.

Here, a deficiency of dopamine produces movement disorders typical of Parkinson’s disease, characterized by rigidity, tremors or slow movements. On the other hand, an overactivity of dopamine in this area causes hyperkinetic disorders, such as chorea or tics.

Instead of starting in the substantia nigra like the others, this pathway goes from the neurons of the hypothalamus to the anterior pituitary gland. It’s responsible for regulating the release of the well-known hormone prolactin. Prolactin is esponsible for the production of milk after childbirth.

Normally this route is active, and dopamine inhibits prolactin production. In postpartum, however, the activity of these neurons decreases, which triggers a large release of prolactin.

Consequently, breastfeeding is possible. Alterations in this mechanism can produce galactorrhea (mammary secretion), amenorrhea (absence of menstruation) and sexual dysfunction.

This is a pathway that stimulates the nerves in the thalamus in primates and has its origin in different parts of the brain. While there are still many big questions about what it does, studies suggest it may be related to sleep regulation and the maintenance mechanisms of wakefulness.

Currently, there is no evidence on the consequences of possible dopamine deficiencies in this area.

The complexity of dopamine

Although this neurotransmitter is famous for giving us pleasure, it does a lot more than that. It participates in everything from the regulation of motor aspects to the production of breast milk.

Understanding how complex our neurotransmitters are helps us better understand how our brain works. And understanding this is essential when it comes to developing treatments or drugs to control the possible imbalances of these substances in different areas of our nervous system.

Oxytocin, the Love and Happiness Hormone
Oxytocin, the love and happiness hormone, has a much more complex role in our bodies and brains than we ever knew, and we're still learning. Read more »
Link copied!
Interesting Articles
Psychology
I Loved You Until My Self-Love Said, “It’s Not Worth It”

I loved you until my self-love said, “it’s not worth it.” I let the curtain fall from my eyes, I took…

Psychology
Haiku to Free Your Emotions

A Haiku is a short poem inspired by the emotion of the moment, wonder, and our connection with nature. It is a Japanese tradition that strips things down to the…

Psychology
Judging Others: A Trap We Set for Ourselves

We have all fallen into the terrible trap of judging others at some point. But, what do I mean when I…

Psychology
Have you heard of this trick to reduce anxiety before doing something important?

Some situations exacerbate our anxiety and really test our ability to control it. Think about job interviews, big presentations, exams, or the…

Many of us maintain a type of mentality focused on our deficits: we get obsessed with everything we lack instead of being…