Read all about glutamate in this article! 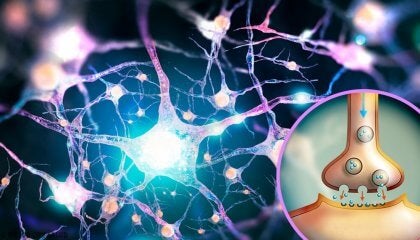 Glutamate is one of the most important neurotransmitters in your nervous system. It acts as the fuel for 80% of your synapses. It’s also the intermediary for memory formation, attention management, and emotional regulation. In addition, it plays a role in important processes such as neuroplasticity, learning, movement, etc.

Many of our readers are probably more familiar with the food industry’s monosodium glutamate than with the essential compound that makes communication between nerve cells possible. Consequently, it’s important to differentiate between the dietary glutamate that’s used as a food preservative or a flavor enhancer and the amino acid that the nervous system produces from glutamine in presynaptic neurons as well as in glial cells.

Under normal conditions, glutamate is one of the most abundant amino acids in your body. The protein in your diet helps your body produce this primary excitatory neurotransmitter in your nervous system. At the same time, neuroscientists explain that this the primary role of this element is to provide your brain energy.

On the other hand, many people have the idea that exogenous glutamate is dangerous for your brain. Although this is a very common belief, the Center for Nutrition at the University of Pittsburgh School of Medicine published a study in The Journal of Nutrition that shows that there’s no evidence that dietary glutamate causes neurological damage.

With that preliminary information in mind, let’s learn more about these two kinds of glutamate and how they affect your body.

The Primary Mediator of Excitatory Signals

The central nervous system (CNS) is made up of neurons and glial cells. Thanks to synaptic connections between the two, your body can carry out basic cognitive, sensory, and motor processes. In this complex process, glutamate acts as the chemical messenger (neurotransmitter) between cells and neurons after an electric stimulus.

Thus, because it’s the primary mediator of excitatory signals, your body has to have the right concentration of glutamate so that it can carry out its role. A deficiency would disrupt that communication. As a result, you wouldn’t have the energy to do anything. An excess of this neurotransmitter, on the other hand, would be very harmful to your brain. It could cause ischemic attacks, strokes, hypoxia, epilepsy, etc.

This neurotransmitter is important for fetal brain development. It also plays a crucial role in neuroplasticity. This amino acid makes neuronal differentiation possible. It also facilitates the migration and creation of new connections. Basically, it’s responsible for overall brain health.

Cell Reports magazine published a study that shows that this neurotransmitter is directly related to the pancreas. It modulates beta-pancreatic cell activity to encourage insulin production.

This is just another example of how important this amino acid is for providing energy and optimizing brain function. You have to remember that the brain can’t get energy from lipids, so it needs glucose to function. Glutamate is the neurotransmitter that fulfills that need.

As we explained before, there’s no evidence that consuming monosodium glutamate (MSG) causes neuronal changes. That being said, it can’t hurt to pay attention to how much MSG you’re consuming. A balanced diet can also go a long way to reduce the possibility of damage.

On the other hand, glutamate-associated neurotoxicity doesn’t always originate from exogenous factors. The main causes are usually related to pathological conditions and changes in the inotropic receptors. Other factors include genetic issues or problems that scientists haven’t yet identified that activate glutamate hyperexcitability, neurotoxicity, and the resulting neuronal death.

Research shows that too much of this amino acid can cause ischemic attacks and strokes, fetal brain development problems, memory problems, epilepsy, muscle pain, etc. However, there are treatments for glutamate imbalance. Some drugs can help regulate glutamate concentration.

In conclusion, existing research shows how important glutamate is to the human brain. Scientists continue to discover new and interesting things about the neurotransmitter that facilitates almost every single function in your brain.

Behavioural Biology
What Is Mansplaining?

Mansplaining is when a man seems unusually condescending or patronizing, especially towards women. This phenomenon references those who follow a more traditional way of behaving and thinking. Although it's usually…