What Does Science Say About Meditation? 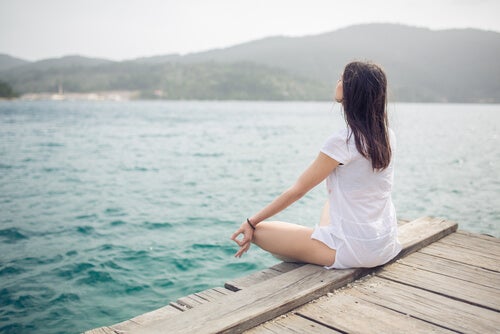 Meditation has become so popular that it is part of our lives in many environments, with different objectives. This is  not without reason. Meditation has multiple benefits for your physical and mental health. Maybe that’s why meditating is becoming fashionable.

However, many people reject meditation because they do not “believe” in it. But meditation is not a religion: you do not have to have faith that it works, neither does it involve magic or luck.

Many of the benefits people say meditation has are scientifically proven. And, in the process of proving these, we found many more benefits and advantages.

Next we will talk about the most outstanding meditation benefits found by researchers in recent years. Research is continuing, so the benefits that we will show you below are probably only the beginning.

An interesting benefit of meditation is that it encourages, and increases, creativity. A 2012 study by the University of Leiden, in the Netherlands, and another, by the same University in 2014, found that certain techniques promote creative thinking.

These studies looked at a meditation called “open monitoring.” In this the participants are receptive to all thoughts and sensations without focusing on any particular concept or object. They performed better in tasks involving creative thinking and they generated more new ideas than before.

These findings support the belief that meditation can have a lasting influence on human cognition. This includes how we conceive new ideas and experience events. This is not only for experienced meditators, but newbies can also benefit from meditation.

The benefit that stands out the most about meditation is that it helps reduce and prevent stress. A study published in January 2017, conducted by the University of Georgetown, USA, found that meditation training reduced inflammatory hormonal reactions to stress, specifically after practicing mindfulness. This rigorously designed clinical trial found objective physiological evidence that conscious meditation combats anxiety.

The researchers discovered that patients with an anxiety disorder drastically reduced stress hormone responses and inflammation to stressful situations after taking a course. Patients who took a stress management course without meditation had worse responses.

Another study published in May 2017 by researchers at the University of Waterloo, Canada, found that just 10 minutes of meditation helps anxious people have better focus. The study evaluated the impact of meditation on 82 participants who experienced anxiety. It found that developing awareness of the present moment reduced repetitive thoughts that are irrelevant, a hallmark of anxiety.

The researchers explain that a wandering mind represents almost half of the daily flow of consciousness for any person. For people with anxiety, repetitive thoughts that leak into tasks they are doing can negatively affect their ability to learn, complete tasks or even function safely.

Meditation improves mental and physical health and resistance to stress

Many people report positive health effects from practicing yoga and meditation, and experience mental and physical benefits. However, we still have a lot to learn about how exactly these practices affect mind-body health.

This article, published in Frontiers in Human Neuroscience, investigates the effects of yoga and meditation on brain-derived neurotrophic factor (BDNF),  hypothalamic effects of the adrenal pituitary (HPA) and inflammatory markers. This time the researchers studied the participants of an intensive 3-month yoga and meditation retreat. They discovered that these practices had a positive impact on BDNF signaling, the response to the cortisol awakening response (CAR) and immunological markers.

Participants reported a decrease in anxiety and depression, as well as an increase in mindfulness. The research team observed increases in levels of BDNF in the plasma. This is a neuromodulator that plays an important role in learning, memory and the regulation of complex processes such as inflammation, immunity, mood regulation, response to stress and the metabolism.

They also observed increases in the cortisol awakening response (CAR), which is part of the suprarenal hypothalamic axis of the pituitary gland (HPA). This suggests better resistance to stress.

A 2011 study conducted by researchers at the Massachusetts General Hospital, USA, published in the journal Psychiatry Research: Neuroimaging, revealed that meditation, specifically mindfulness, can cause measurable changes in the brain regions associated with memory, the sense of self, empathy and stress. This study first documented the changes produced by meditation over time in the gray matter of the brain.

Analysis of the MRI images found a greater density of gray matter in the hippocampus. This is important for learning and memory. They found it in structures associated with self-consciousness and introspection as well. The reductions in stress also correlated with the decrease in gray matter density in the amygdala. This is known to play an important role in anxiety and stress.

Another study, conducted in 2013 by researchers from Wisconsin, Spain and France was published in the journal Psychoneuroendocrinology. It reported on specific molecular changes that occurred in the body after a period of conscious meditation.

The study investigated the effects of a day of practicing intensive mindfulness on a group of experienced meditators. It compared this with a group of untrained control subjects who participated in quiet and non-meditative activities. After eight hours of practicing mindfulness, “the meditators” showed a range of genetic and molecular differences. This included altered levels of gene regulatory machinery, and reduced levels of pro-inflammatory genes. This is associated with faster physical recovery in a stressful situation. These are same targets that manufacturers have for anti-inflammatory and pain relieving drugs.

Compensation for DNA reactions that cause stress

A more recent study, from June 2017, conducted by the University of Coventry, in the UK, found that mind-body interventions (MBI), as well as meditation, yoga and Tai Chi do not simply relax us. They can “reverse” or compensate for certain parts of our DNA that can be risk factors.

The research, published in the journal Frontiers in Immunology, reviews more than a decade of studies. These studies analyze how different MBIs affect how our genes behave. The 18 studies had 846 participants over 11 years old. When examined together, they show a pattern in the molecular changes that occur in the body as a result of MBI. They also show these changes benefit the mental and physical health of the patients.

Researchers focus on how gene expression is affected. That is, they focus on how genes activate to produce proteins that influence the biological composition of the body, brain and immune system.

Millions of people around the world already enjoy the health benefits of mind-body interventions, such as yoga or meditation. But these benefits begin at the molecular level and can change the shape of our genetic code. The researchers called this a “molecular signature”, which reverses the effects of stress or anxiety on our body.

Pain relief is another reason why research on meditation exists. A study published in June 2017 by the University of Leeds Beckett, in the UK, found that meditation could be a cheaper alternative to traditional pain relievers.

According to the study, just ten minutes of mindfulness could be used as an alternative to pain relievers. The results  suggest that a single ten-minute mindfulness session can improve pain tolerance, pain threshold, and decrease anxiety towards pain.

Other previous studies had explored the possibility of relieving pain without opioids through meditation. This is the case of a USA study of March 2016. It was produced by Wake Forest Baptist Health and published in the Journal of Neuroscience. According to this study, after a short period of meditation training pain reduced.

These results are especially important for those who tolerance to opiate-based drugs. These people are looking for a non-addictive way to reduce pain. Meditation can be used with other traditional therapies or medications to relieve pain without side effects.

A previous 2015 study, produced by the same center, found conscious meditation reduces pain better than a placebo. The study used a two-way approach. It used pain scores and brain imaging to determine whether mindfulness is a placebo or has true impact.

This study showed that participants who practiced mindfulness reported greater pain relief than with the placebo. Brain scans showed that their brain activity was different than those that had taken the placebo.

Research on the effects of meditation continues

Here, we talked only about some of the studies that addressed the effects of meditation. Undoubtedly, there is interest because we are seeing benefits that go beyond myths and beliefs, and the placebo effect.

We don’t need proof that if you want to verify if this works, you need to to try it yourself. You should have an open mind and not make judgments. There are no side effects, and once you do it you will see the results.

Childhood Meditation – Cultivating Our Internal Garden From An Early Age
Meditation is really important for maintaining our mental and physical well-being, so why not start teaching it at an early age, it has huge benefits! Read more »
Link copied!
Interesting Articles
Psychology
Once There Was A Princess Who Saved Herself

Psychology
The Greatness of Good-Hearted People

Good-hearted people always pour their hearts and souls into everything. You can tell by the look in their eyes, their…

Psychology
Are Hurtful, Critical People Missing Something Inside?

Treatment-Resistant Depression (TRD), or treatment-refractory depression, is that which tends not to respond to ordinary medications. People with it try…