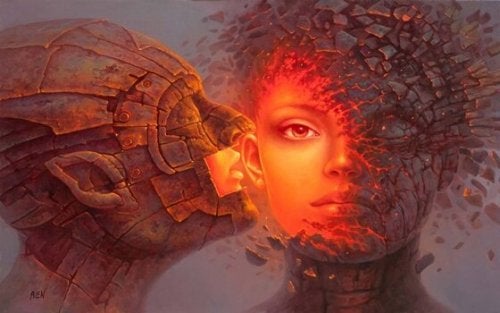 Dormant love is like a bird trapped in a cage. It exists, it is living, we can hear its song and its heartbeat. But it isn’t able to open its wings and fly free. It is a situation that many couples who love each other experience. They have a deep affection for each other and they both know it. However, they don’t fully express it and so it doesn’t fill their lives with magic.

This feeling can be confusing. You might feel that you don’t love someone anymore, even though you still feel affection. But if you worry about losing him or her, you can tell right away that you are dealing with dormant love. Even so, you have doubts. Is it worth staying in a relationship that doesn’t thrill me? Is it really love or just habit?

“Keep love in your heart. Life without it is like a sunless garden when the flowers are dead.”

Almost all couples have these types of questions after being together for several years. A group of researchers from Florida State University in the U.S. also asked themselves these questions. They designed a study to find out if introducing a specific change to a relationship could help it bloom again. The answer, they found, was yes.

From falling in love to dormant love

We all know that the first stages of a relationship are the most exciting. In the first phase, which we call falling in love, it’s like living in another world. We feel butterflies in our stomach, of course. But beyond that, it is like everything suddenly makes sense. And nothing is ordinary, everything is whole and true. It is like finding the missing piece of a puzzle. When the puzzle is completed, it reveals a jubilant and wonderful image.

When we are in love we get a little taste of eternity. It is such an extraordinary feeling that we never want to give it up. As much as we want to keep it, however, the magic of those initial stages starts to disperse. The butterflies fly a little slower. We discover that in spite of everything, even the infinite has its limits. If love were a plate of food, we’ve ruined the aesthetic of the presentation (partly because we chose to) and we start to eat.

At this point, there is a literal disappointment. It’s not uncommon that we find some aspect of the other person that we don’t like. We come out of our dream and return to reality, which is always a bit disappointing. If we have a strong bond with our partner, we manage to navigate this transition and move on to a different stage. It is a less exciting stage, but it is also more profound.

As time passes, however, we can also feel nostalgic for how we felt before. This nostalgia is exactly what leads us to ask if there’s still love there. If it has simply transformed, or if it is no longer there.

We may not reject our partner, but we also don’t feel the same enthusiasm as we did in the beginning. We may not desire to end the relationship, but we feel indifferent towards it. We also realize that the things we did happily for our partner before have become somewhat of a chore.

This is the stage that the researchers at Florida State University studied. They also found the key to reviving the relationship. Let’s see what it is.

How to wake up dormant love

Researchers found that in the presence of dormant love, each person automatically associated their partner with a series of images and ideas. These appear in the mind unconsciously. So, for example, a woman sees her partner and her mind projects an image of slippers. Or a man sees his partner and thinks of a sink full of dishes.

Scientists asked themselves what would happen if they trained couples to change these automatic associations. The experiment, with this hypothesis in mind, focused on getting each person to associate their partner with new, positive images. Instead of seeing old slippers, the woman would see a puppy. And he wouldn’t see a sink full of dishes, but a sweet animal.

Psychologists used the operant conditioning method. This consists of giving a reward every time the person associated the image of their partner with something positive. When they don’t, they receive negative reinforcement or nothing at all. The experiment was done with a group of 144 volunteer couples. To achieve a more objective result, some of the couples were presented with positive images, and some with neutral ones.

The experiment showed that the researcher’s hypothesis was correct about “dormant love.” Those who received positive association conditioning with their partners felt that their relationship was revitalized. Those who received neutral association conditioning (they were shown an image of a fork, for example) didn’t show any major transformation. They showed that love is also something that changes and adapts within the brain and is very sensitive to associations.

They showed that love can be resurrected by rescuing and strengthening. The key is to create connections between the couple’s images of each other and positive stimuli. Maybe that is why couples who have a mutual admiration for each other don’t have any problem keeping their love alive and awake.

How Real Love Feels
When you can't feel love, when there's not any mutual interest, that love doesn't exist and is no good for you. It's very hard to be realistic about this. Read more »
Link copied!
Interesting Articles
Wellness
3 Things I Learned from Living with Depression

It was as if depression shrunk me so much that, in the end, I found myself in the cold dark…