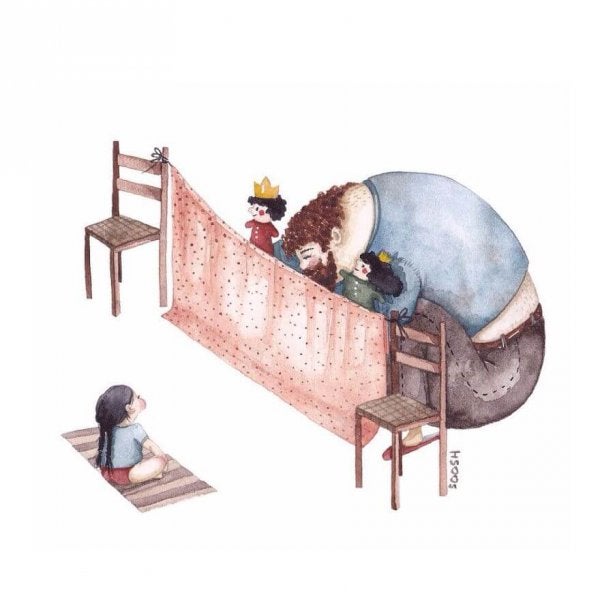 She was born yesterday, and in a few hours, she will be starting college. Yesterday they told me I was going to be a father, a second later she was crawling, and minutes later she had her first driving lesson. Yesterday she looked at us as if we were gods. Today she looks at us as someone who truly knows each and every one of our defects. In the midst of all this, only a night passed. A night in which I’ve been thinking, awestruck, watching her grow…

I’ve watched her grow at intervals because sometimes I had to go to work. In other moments her siblings needed me, my siblings, friends, parents or her mother needed me. Sometimes I needed myself. I have arrived home late and sometimes I couldn’t think of a story. That’s how she left the age of made-up stories and started experiencing how reality can be infinitely crueler as well as more delightful.

She wants to do it herself. She doesn’t want us to be overprotective or tell her “what you don’t know can’t hurt you” for each step she takes, each risk she tajes on.

The hopes of a father

Yesterday I had a mountain of hopes for her. Hopes that were all mine, hopes that she hadn’t said anything about. She just signaled for the bottle when she was thirsty. She put whatever she found in her mouth when she was hungry. Today I still have my hopes, but she has her own and I have to accept that. It’s a process that has taken all night.

I would have liked for her to be a lawyer. I believe that they have a comfortable life. I think that they have important positions, that their education gives them a better sense of justice than most mortals. However, she wants to be a journalist.

She doesn’t want to be a TV journalist, however. She wants to be one of those anonymous journalists. One who travels and reports on war and gives voice to important stories. That scares me so much that sometimes I can’t sleep. Meanwhile, she is looking at me with the face of someone who has fallen madly in love with someone she just met. As a father, this look – her look, also makes me proud.

As a father, it hasn’t been easy to hand over the reigns. I always see her as much younger than she is, smaller and more vulnerable, impressionable and innocent. I’ve also seen her walk up to the edge of the cliff with all the determination in the world and I’ve had to let her do it. As much as I would have liked to be her best teacher, there are lessons that only life can teach you. There are some that you have to learn with others.

She looks so beautiful there asleep. I don’t know if she knows, but she is the most beautiful girl in the world. I’ve told her this many times and she laughs, then blushes, and finally responds with a “Da-ad!” (don’t embarrass me).

It’s hard to understand her struggle against her own body. It’s hard to bring back the memory of when it was so important to me what other kids thought of me. It’s difficult to comprehend that remembering will help me understand. This process also makes me nostalgic. It brings tears come to my eyes.

I remember the anxiety I felt when I had to go to school with that horrible jacket. The one that my mom sewed in her moments of boredom and itched like the devil. I don’t know what horrible jacket I have made my daughter wear. Maybe there are several. Perhaps when I made her take music classes. That is until her disregard for music killed my dream that she would make friends with the eight and sixteenth notes. I couldn’t make her like it. She was struggling in front of me and I made myself feel better by thinking it was good for her.

As much as I would have liked to be her best teacher, there are lessons that only life can teach you. There are some that you have to learn with others.

If I were able to start again, I don’t think I would make you do so many things that were “good for you”. At least not from the sidelines. I would share the experiences with you. I wish I had realized how you looked at the ball when you were little and played soccer with you. I would have liked to be less alert to dangers and more alert to dreams. I shouldn’t have been late so often. I wish I would have played with you more. Before you gave up on me and found other kids to play with.

I should have known that you were perfectly capable of putting a jacket on when you were cold. That you would eat when you were hungry. These were the needs you had at the beginning, but not later. Later, What you needed was encouragement for the projects you started. You wanted answers to your questions and the company of someone who wasn’t like a boss. You needed support, comfort, and inspiration. Maybe that was part of the role that I played, maybe that’s part of being a dad.

They say that emotions are magical… and that human beings have so many emotions that we can experience more than one at the same time. I feel sad that we won’t get back the time we didn’t spend together. I suppose all parents feel the same at some point, but that doesn’t make me feel better

Nevertheless, what does make me feel better is what I see now. I see you fighting your own battles in an honest way. That makes me proud. However right or wrong they might be, you chose them and you’ve found your passion. As I watch you grow, I finally understood that I wanted an easy life for you. What you want for yourself is a happy life. Now I just hope you find it, and that you share it with me.

P.S. As you can see, today I am a bit of a journalist as well as a father. I would like to finish this article and sign it with you at lunchtime.

A Father May Not Nurse a Child, but He Still Nurtures
Read more »
Link copied!
Interesting Articles
Psychology
Divergent Thinking: What It Is and How to Develop It

Divergent thinking, or lateral thinking, is about generating multiple creative solutions to the same problem. It is a spontaneous, fluid,…

Psychology
DISC Tool: What Does Wonder Woman Have to Do with the Study of Personality?

Forgiveness is a powerful weapon that allows you to live in peace with others and, above all, at peace with yourself. However, many people don't understand the liberating power of forgiveness. However,…